When Governor Jerry Brown stated that “California is the future,” it was a call to arms, a rallying cry to political progressives and Democrats shocked by President Donald Trump’s improbable election victory. Gov. Brown has struck a defiant tone and promised to deploy California’s considerable resources to resist the Trump administration’s policies. In a recent speech, Brown talked up California’s clout: “We have a lot of firepower! We’ve got the scientists. We’ve got the universities. We have the national labs. We have a lot of political clout and sophistication for the battle. And we will persevere!”

Why California is Important

California does wield significant political, intellectual, and economic power. The state boasts $2.5 trillion in gross economic output, making it the sixth largest economy in the world. It also serves as the backbone of the Democratic Party: One in five Democratic House members hail from the Golden State, including House minority leader Nancy Pelosi. California also has some of the best opportunities for Democrats to pick up House seats in 2018. As many as seven California Republican House members are potentially vulnerable representing districts that went for Clinton in 2016. The Golden State is one of the few state’s where Clinton outperformed Obama in 2012, increasing the Democratic margin at the presidential level (61.5 percent vs. 59.3 percent).

Californians also express views on immigration and other issues that are substantially different than residents of the other 49 states. While a majority (57 percent) of Americans living outside California believe that the American way of life needs to be protected from foreign influence only about four in ten (42 percent) Californians agree. Most (55 percent) Californians believe that immigrants strengthen the U.S. because of their hard work and talents. Outside of California, the public is more divided—fewer than half (46 percent) of Americans in the other 49 states believe that immigrants are an asset to the country.

But California’s claim to represent America’s future is also about demographics. The religious, racial, and ethnic profile of the state closely resembles this country’s youngest generation.

A Preview of the American Religious Landscape? 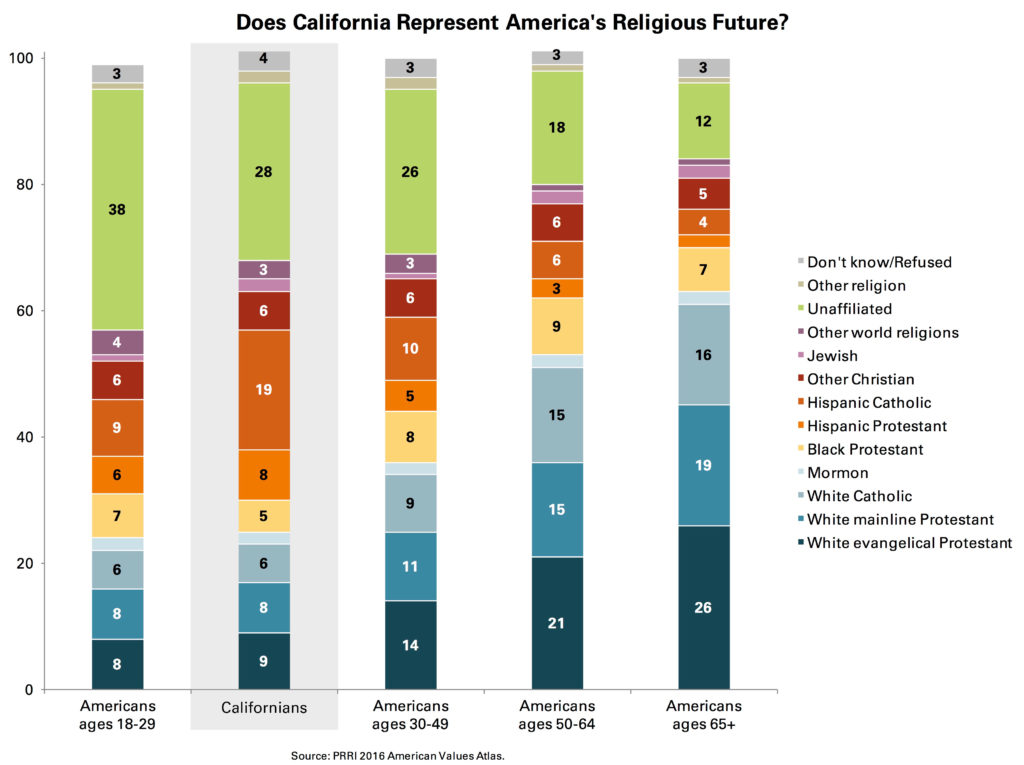 Related Research
Exodus: Why Americans are Leaving Religion—and Why They’re Unlikely to Come Back
Religion, Proposition 8, and Same-Sex Marriage in California
Thanks for signing up!
Tweet
Tweet
Tweet