Younger voters, particularly younger women voters, overwhelmingly supported Democratic candidates in the 2022 midterm elections, with some analyses suggesting that their votes effectively canceled out those cast by the more Republican-leaning Boomer and Silent generations. There are few more enduring divides in public opinion than the ones defined by generational differences and partisan differences. In fact, there are only two mechanisms that can bring about political change. One is replacement, which relates to gradual changes within a population when older generations are no longer a part of society and younger generations come to dominate society. The other is conversion, which means that people change their own minds on an issue. In the arena of LGBTQ politics, both replacement and conversion have factored into a steep rise in support for marriage equality. However, this increase in support has not occurred on the issue of transgender rights, particularly when it comes to body-centric policies such as laws that deal with restrooms and other public accommodations. In fact, PRRI’s 2022 American Values Survey showed that the public has grown more antagonistic toward public accommodations protections for transgender people.

Since 2016 when PRRI started documenting public attitudes about laws requiring transgender people to use bathrooms that correspond to their assigned sex at birth, there has been an increase in the number of people who strongly favor such policies and a decline in the number who somewhat or strongly oppose them. Notably, the American public has grown more certain of their opinions on this issue, as the rate of “don’t know” responses has declined substantially. The 2022 American Values Survey also reveals a marked increase in both strong support and strong opposition toward such policies. Thus, while pro-transgender attitudes have declined, it appears that the public has grown more polarized on this matter. 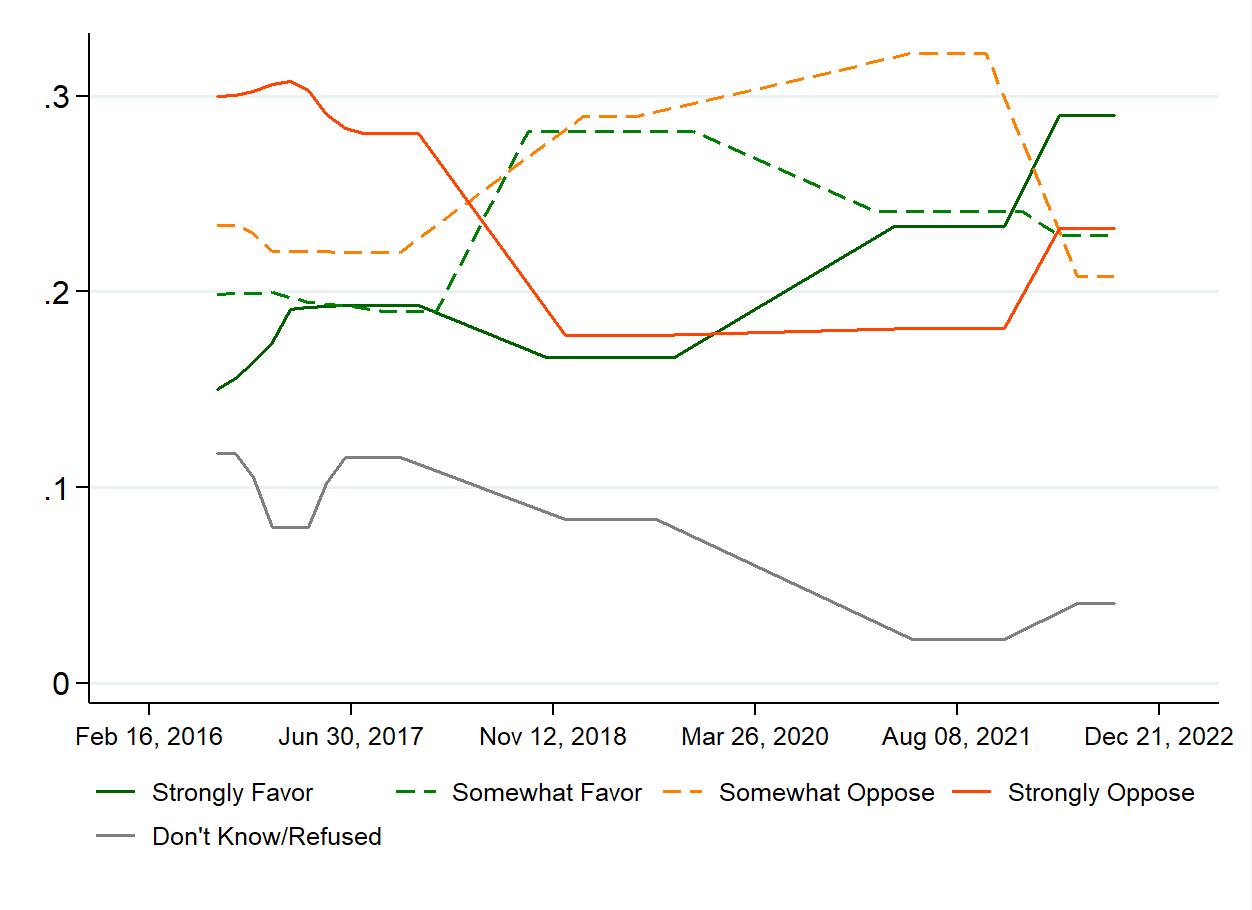 How much do these patterns have to do with generational differences?[1] On its face, it seems like a lot. Trends among members of the Silent, Boomer, and Generation X cohorts show a marked increase in the number of people who strongly favor restrictive policies, while the number of those who oppose such policies or have no opinion on them has declined. However, Millennials and members of Generation Z have firmly remained in opposition to these policies since PRRI started surveying on the issue. 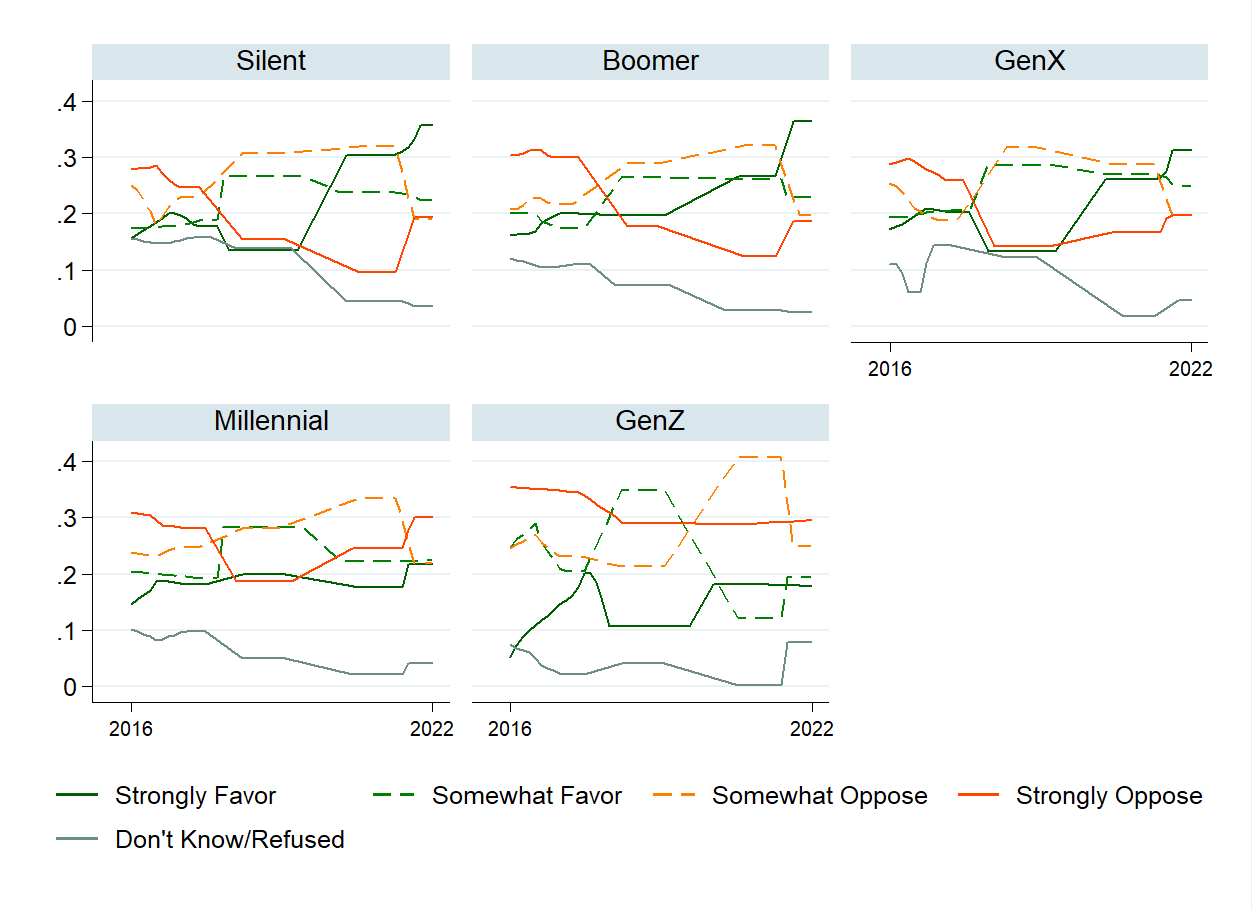 What is most striking, however, is how much opinions have changed among the older generations. Typically, opinion does not move so quickly on such issues. There has clearly been some conversion in the attitudes of older Americans. But what might be driving these changes?

American politics these days is rife with polarization. Both among elected officials and everyday voters, the political parties have grown so far apart such that some argue the center has disappeared in numerous policy debates. On the issue of transgender rights, polarization started among partisan elites and politically aware partisans followed. Now there are clear partisan cleavages on transgender rights, with a number of Republican-dominated states like Florida, Texas, and Tennessee passing or proposing legislation aimed at limiting the ability of transgender people to access medical care and live their lives. Perhaps generational divides have also been affected by partisan polarization. 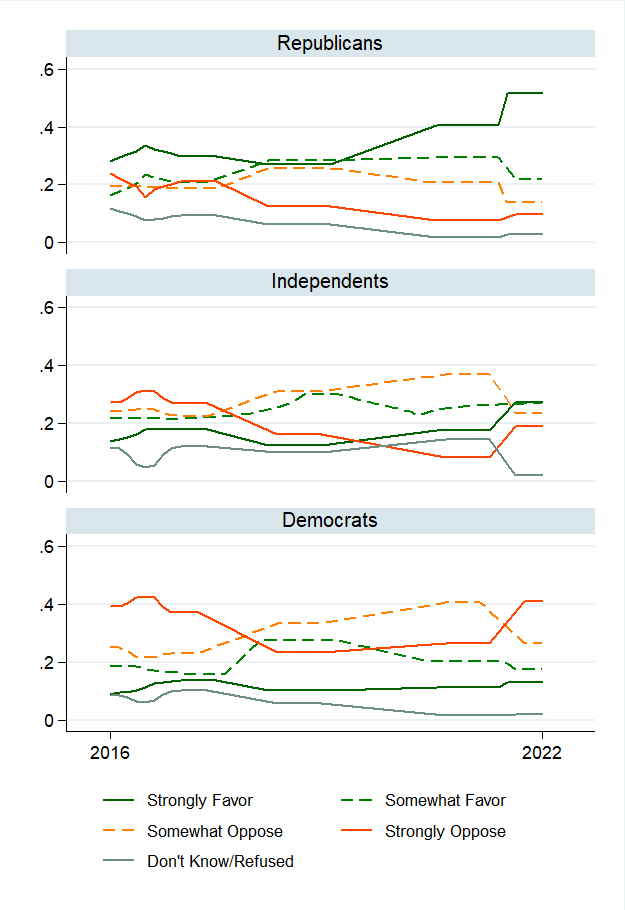 Perhaps generational and party differences both explain these trends, and perhaps younger Republicans are more opposed to requiring transgender people to use bathrooms based on their assigned sex at birth. For example, a recent Pew Research analysis suggested that while attitudes toward climate change policy tend to differ along party lines, younger generations who belong to opposing parties tend to share more attitudes about climate-related policies than older generations. Interestingly, PRRI data reveals that generational divisions are largely explained by partisan differences. That is, younger Republicans’ views are more similar to those of older Republicans than to those of younger Democrats. Similarly, older Democrats share more views with younger Democrats than with older Republicans. It is rare for public opinion to change quickly, but, in an era of hyperpolarization, the positions political parties take are quickly adopted by party members. Generational divisions, then, are largely attributable to differences in the generations to identify with the Democratic or Republican Party.

What do these findings boil down to? Based on the trends among different age cohorts, some strategists suggest that LGBTQ advocates simply wait for older generations to leave society. This view doesn’t necessarily match the data, however. If younger cohorts start identifying more with the Republican Party—which has made a point of trying to appeal to younger white men—then partisan polarization could potentially continue to dominate LGBTQ politics and convert what are potentially more pro-transgender views to be more opposed. It is not guaranteed that demographic change means a destiny of victory for LGBTQ equality. So advocates of transgender equality will be best served by appealing to all of the public as they go about the difficult process of telling their stories to advance transgender rights. 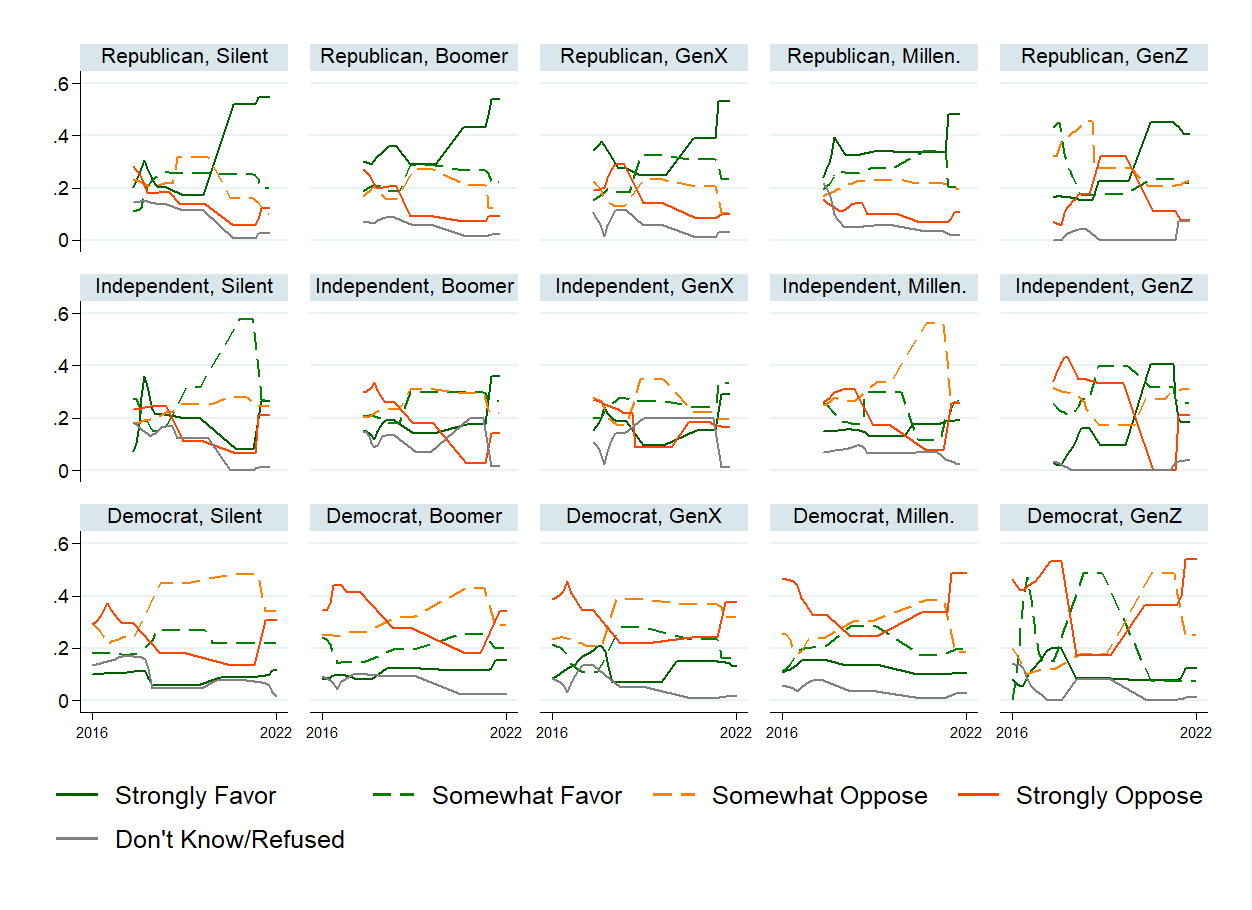 [1] I define generations in this analysis following the Pew Research Center’s definition of these cohorts.