On January 20th, the Parental Rights in Education Bill was introduced to the Florida House of Representatives. This controversial legislation, also referred to as HB1557 and the “Don’t Say Gay” bill among opponents, is seen as a measure by Republican lawmakers to target LGBTQ youth. HB 1557 passed the Florida House on February 28th, and it passed the state Senate on March 8th. It was then sent to Gov. Ron DeSantis’s desk and was signed into law on March 28th. Many LGBTQ advocacy groups have been protesting the bill since its introduction.

What’s in the Bill

One aspect of the bill “prohibits classroom discussion about sexual orientation or gender identity” in kindergarten through third grade “in a manner that is not age-appropriate.” If a school violates this clause, parents have the right to take legal action against the school. Although the bill only mentions kindergarten through third grade, some believe that the vaguely worded language in the bill could cause parents to protest discussions of sexual and gender identity at all levels of schooling. The goal of the bill is to “reinforce [the] fundamental right of parents to make decisions regarding upbringing and control of their children.”[1]

More than three in four Americans (79%) support laws that would protect gay, lesbian, bisexual, and transgender people against discrimination in jobs, public accommodations, and housing. A majority of Americans (66%) are opposed to religiously based service refusals against gay and lesbian couples. More than two-thirds (68%) support same-sex marriage.

Support for pro-LGBTQ policies is popular across the party spectrum. A vast majority of Florida Democrats and independents support nondiscrimination protections (87% and 83%, respectively), oppose religiously based service refusals (87% and 66%, respectively), and support same-sex marriage (82% and 75%, respectively). Around seven in ten Florida Republicans support nondiscrimination protections (69%), while around half oppose religiously based service refusals (48%) and support same-sex marriage (49%). 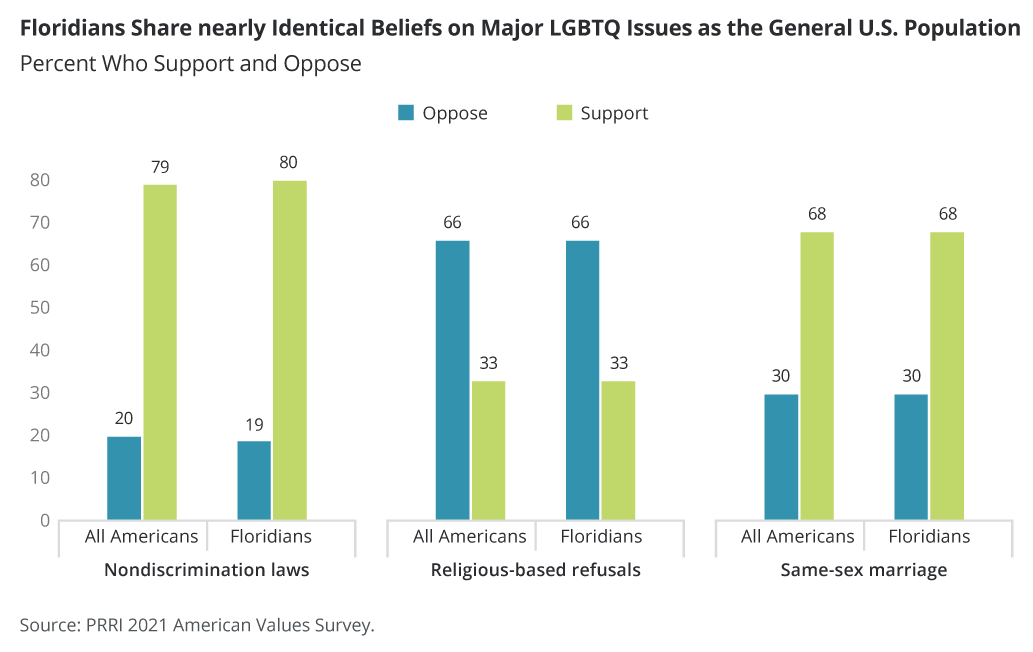 These survey results indicate that the state’s majority Republican legislature is out of step with the overwhelming majority of Floridians, including at least half of Florida Republicans, who generally support pro-LGBTQ policies. Opponents see the passage of the “Don’t Say Gay” bill as an attempt to legislate farther to the right than the majority of Floridians, and many Florida Democrats and LGBTQ advocacy groups are fighting it.