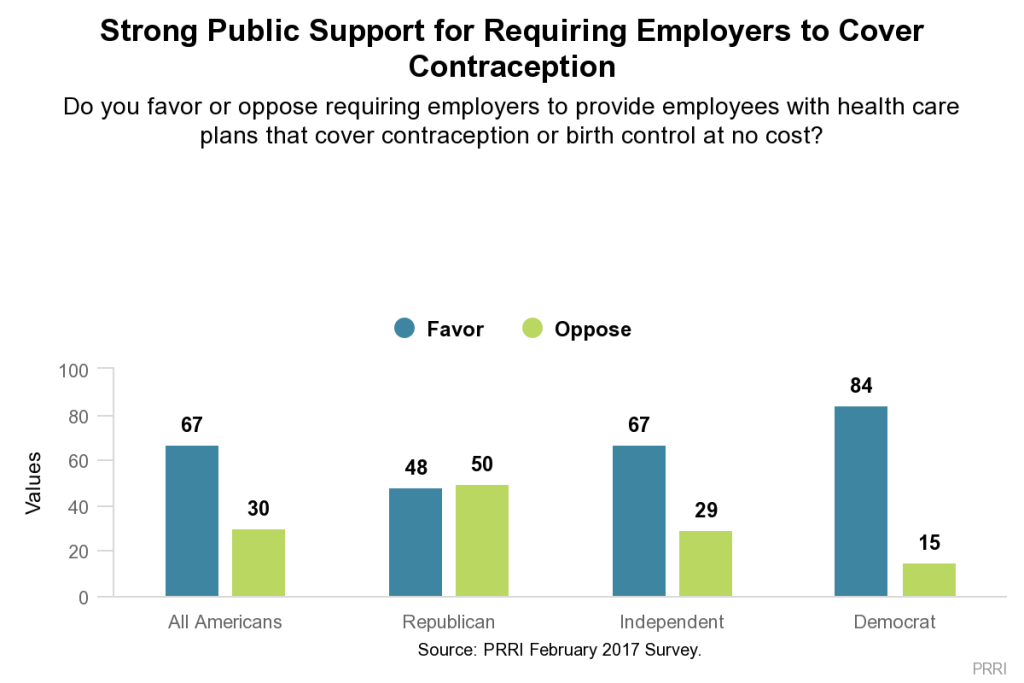 In a reversal of an Obama-era policy, the Trump administration announced that it is ending the federal mandate for employers to include contraceptive coverage in the health care plans offered to its employees, expanding exemptions for employers who cite religious objections to the policy . Despite this move, the requirement that employers provide full-time employees with health insurance covering contraception is broadly popular among the public.

Two-thirds (67 percent) of Americans favor requiring employers to provide employees with health care plans that cover contraception or birth control at no cost. Only three in ten (30 percent) oppose this policy.

Views regarding contraception requirements for employer-sponsored health care coverage vary substantially across party lines. More than eight in ten (84 percent) Democrats say the express support for this policy while fewer than half (48 percent) of Republicans agree.

Notably, there is support among all major religious groups although the level of agreement varies substantially. A majority of white Catholics (53 percent), white evangelical Protestants (54 percent), and nonwhite Protestants (58 percent) support a mandate that employers offer health care plans that cover contraception. White mainline Protestants and unaffiliated Americans are the most likely to hold this view, with more than three-quarters (75 percent and 81 percent, respectively) stating that they favor such a policy.

Women show more support for this policy than men, although majorities of both express support. Nearly three-quarters (73 percent) of women, along with six in ten (60 percent) men, believe employers should be required to provide employees with health care plans that cover contraception or birth control at no cost.