Rumblings of a “religious left” rising have been happening ever since President Trump’s win in 2016. But PRRI’s Dan Cox points out in FiveThirtyEight that growing religiously unaffiliated rates, muted online presence, and, perhaps most importantly, a lack of unity on important social issues hinders the possibility of a movement comparable to the “religious right.”

Adding to the challenge: The politics of religious groups don’t always align along a typical left-right spectrum. For example, according to the Public Religion Research Institute’s American Values Atlas, a survey of over 100,000 Americans, most Hispanic Catholics are supportive of same-sex marriage and other rights for gay and lesbian people, but are much more ambivalent about abortion; they also tend to express more traditional attitudes about gender roles. Muslims are more likely to hold socially conservative views on the issue of same-sex marriage. Black Protestants are generally supportive of making abortion accessible but are more reticent when it comes to pushing for LGBT equality. The politics of white mainline Protestants are even more diverse. Members of these denominations tend to be culturally liberal but tilt right economically and express more negative views of immigrants. A majority of them have also supported Republican candidates in each of the past four presidential elections. Negotiating these political and cultural differences would require a truly gifted shepherd. 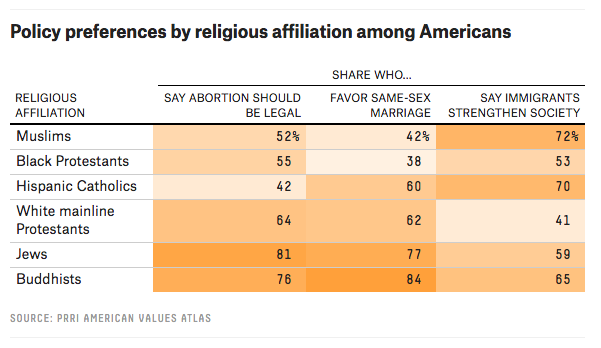 Although it’s unlikely that a reinvigorated religious left will become a major player in American politics anytime soon, that doesn’t mean it’s unimportant. Advocacy based in religion offers a host of benefits to the wider progressive movement. First, religious movements often cross racial and ethnic boundaries, which some activists have argued is a key challenge in other sectors of progressive politics. Second, religious groups have built-in institutional advantages that make it much easier to build and sustain advocacy organizations. If the religious right has a single lesson to offer the left, it’s that churches make excellent incubators for political movements. With the decline of unions, progressive organizing has been left with a vacuum to fill. Left-leaning congregations could provide much-needed organizational apparatus that would be particularly important in local and off-year elections — the type of contests Democrats have struggled with in recent years.