In 2017, the number of anti-Semitic incidents increased by 57 percent, the largest annual increase ever recorded, according to the Anti-Defamation League. The rise in anti-Semitic incidents has been accompanied by a rise in hate crimes overall, particularly those targeted at religious and racial minority groups. However, though a recent PRRI/MTV survey of young people (age 15-24) finds that three-quarters (75 percent) of young people believe that discrimination against Muslims has increased over the last 12 months, they are notably less likely to say the same about Jewish Americans.

In a recent focus group conducted by PRRI, one young Latina (age 18-24) said, “I just haven’t personally heard of [the rise in hateful symbols and language targeting the Jewish community]. … It could have happened, but I haven’t heard that.” And if young people aren’t personally seeing discrimination against Jewish people, that might explain why they are less likely to perceive the increase in discrimination against Jewish people. Fewer than one in five (17 percent) young people say Jewish people experience more discrimination in the U.S. today than they did a year ago. More than two-thirds (69 percent) say the amount of discrimination they face has stayed the same—and 13 percent say it has decreased. 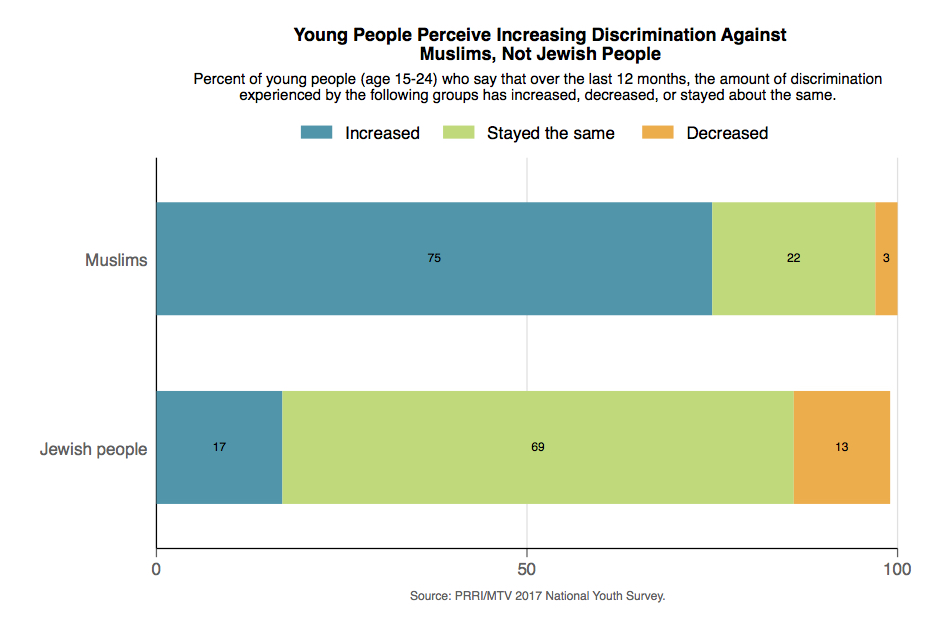