In 2020, the FBI’s reported crime statistics logged 247 antisemitic incidents,  including intimidation, assault, and vandalism. Though such blatant acts of hatred are a serious problem, antisemitism often takes a much more subtle form.

Examples of antisemitism listed by the International Holocaust Remembrance Alliance include, but aren’t limited to, making allegations that Jews or the Jewish people are in control of world power and governmental institutions, minimizing the horrors of the Holocaust, and holding the Jewish population responsible for actions committed by the Israeli government. One way to discover the prevalence of these stereotypes is to examine the portrayal of Jewish people in popular media.

In PRRI’s 2017 Youth Poll, 61% of Americans between the ages of 15 and 24 believed that the media portrayal of Jewish people was fair and accurate. However, there are subtle instances of antisemitism in everyday life that can slip under the radar of those who are not looking for it. For example, Jewish characters in “The Merchant of Venice” and “Oliver Twist” are shown in a stereotypically negative light.  In some Disney movies, villainous characters have “Jewish” characteristics. For instance, Hades in “Hercules” uses Yiddish expressions, and Mother Gothel in “Tangled” has black curly hair and a large nose, and elements of the movie echo the old antisemitic myth of blood libel.

In PRRI’s 2013 American Values Survey, 53% of Americans had a positive view of Jewish people, while 17% had a negative view, and 26% refused to answer.

In both 2014 and 2019, PRRI asked respondents if they believed a business owner should be able to refuse to serve someone who was Jewish because of the owner’s religious beliefs. In 2014, 12% said yes and 85% said no. In 2019, almost two out of 10 Americans (19%) said that business owners should be allowed to refuse service to Jews because of religious reasons while 78% said that should not be allowed.

Despite the progress Gen Z has made toward being one of the more socially aware generations,  in a 2017 poll, many young Americans did not feel there was a large wave of antisemitism in the United States. In the same youth survey, almost seven in ten believed that the level of discrimination faced by Jews had not changed in recent years  (69%), despite there being a 37% increase in antisemitic hate crimes in 2017 compared to the year before. Though news headlines frequently reported antisemitic incidents, 67% of the 2017 survey group believed that there was not a lot of discrimination against Jews. 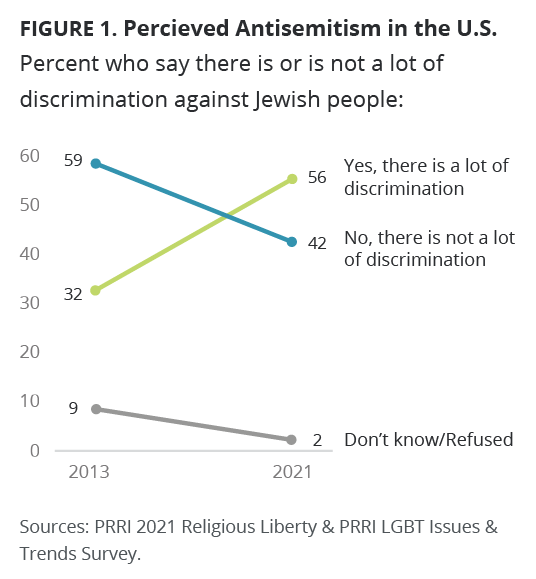