As the coronavirus pandemic expands in the United States, Americans are being urged to stay home and avoid certain activities to help stop the spread of the virus. In some states and regions, so-called “shelter in place” orders have been issued to enforce staying home for all except essential work and activities. New data from PRRI shows that for the most part, Americans are likely to heed these instructions.

Table 1: Number of Activities Americans Say They are Likely To Avoid

Notably, the data also shows Americans responding in real time to the worsening conditions on the ground. On March 17, less than four in ten (39%) Americans said they were likely to avoid all eight activities. By March 20, this percentage had jumped to 54%, climbed to 58% on March 21, then returned to 54% on March 22. A similar pattern can be seen on the other end of the scale. On March 17, 42% of Americans said they will avoid 0-5 activities as a result of the coronavirus. This percentage fell to 24% by March 20 and declined even further to 12% by the end of data collection on March 22.

During this period, coronavirus cases exponentially increased each day. On March 17 there were about 7,000 reported cases, but that number more than doubled to nearly 15,500 two days later. By March 20, coronavirus cases had jumped to nearly 19,000 and by the end of this period, and on March 22, there were more than 33,400 reported cases.[1] During the same time period, state and local governments became more hands-on in preventing the spread of the virus. 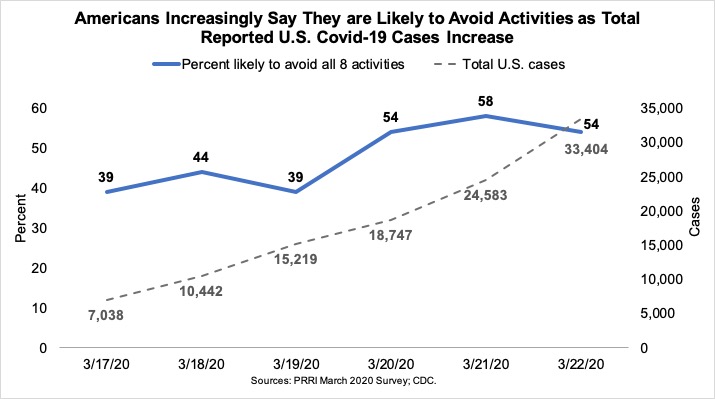 No Differences by Party Affiliation, but Trump Favorability Shapes Behavior

Americans are united across party lines in their determination to avoid these activities. About half of Democrats (51%), Republicans (49%), and independents (46%) say they are avoiding all eight activities. Republicans (67%) are slightly less likely than Democrats (79%) or independents (77%) to say they are likely to avoid going to a bar or restaurant, but there are no notable partisan differences on any other activity. 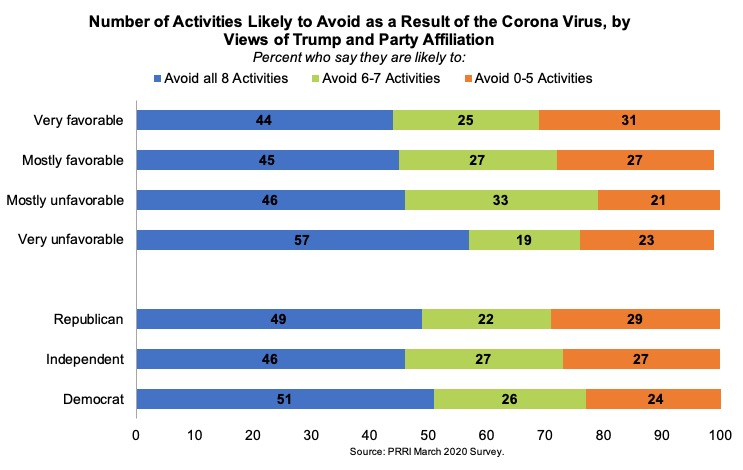 With Exception of Gender and Education Level, Few Demographic Differences in Behaviors

Overall, there are few demographic differences on this question, with notable exceptions of gender and education. Women (54%) are more likely than men (41%) to say they will avoid all eight activities due to the coronavirus.

There are also no major differences by religious affiliation. A majority (53%) of religiously unaffiliated Americans, compared to 48% of white evangelical Protestants, 47% of Catholics, 46% of white mainline Protestants, and 43% of nonwhite Protestants, say they are likely to avoid all eight activities. These differences are not statistically significant. 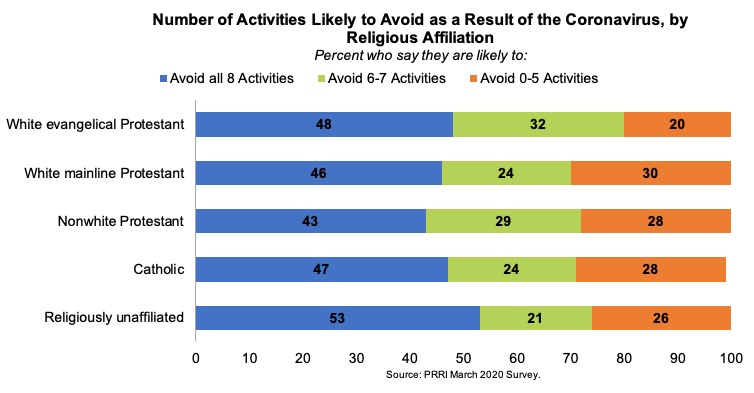 Despite the coronavirus currently having more of an impact on the coasts and urban areas, Americans are not divided across geographic lines. About half of people living in the West (52%), Midwest (48%), Northeast (48%), and South (45%) say they are likely to avoid all eight activities. Americans living in rural (53%), urban (47%), and suburban (47%) areas are all about equally likely to say they are likely to avoid all of these activities. There are also no differences between Americans living in more affected states (47%) compared to less affected states (49%).[2]

The survey was designed and conducted by PRRI. Results of the survey are based on bilingual (Spanish and English) RDD telephone interviews conducted between March 17 and March 22, 2020, by professional interviewers under the direction of SSRS. Interviews were conducted among a random sample of 1,008 adults 18 years of age or older living in the United States (703 respondents were interviewed on a cell phone). The margin of error for the survey is +/- 3.5 percentage points at the 95% level of confidence, which includes the design effect for the survey of 1.3.

[1]  Coronavirus data comes from the Centers for Disease Control and Prevention (CDC). Cases include both confirmed and presumptive positive cases of COVID-19 reported to CDC or tested at CDC, with the exception of testing results for persons repatriated to the United States from Wuhan, China and Japan. https://www.cdc.gov/coronavirus/2019-ncov/cases-updates/cases-in-us.html

[2]More affected states are those with more than 1,000 confirmed COVID-19 cases as of early on March 24, 2020. Those states are New York, New Jersey, California, Washington, Michigan, Illinois, Florida, and Louisiana. There are still no significant differences if only the four most impacted states (New York, New Jersey, California, and Washington) are assessed (49% compared to 48% among all other states).