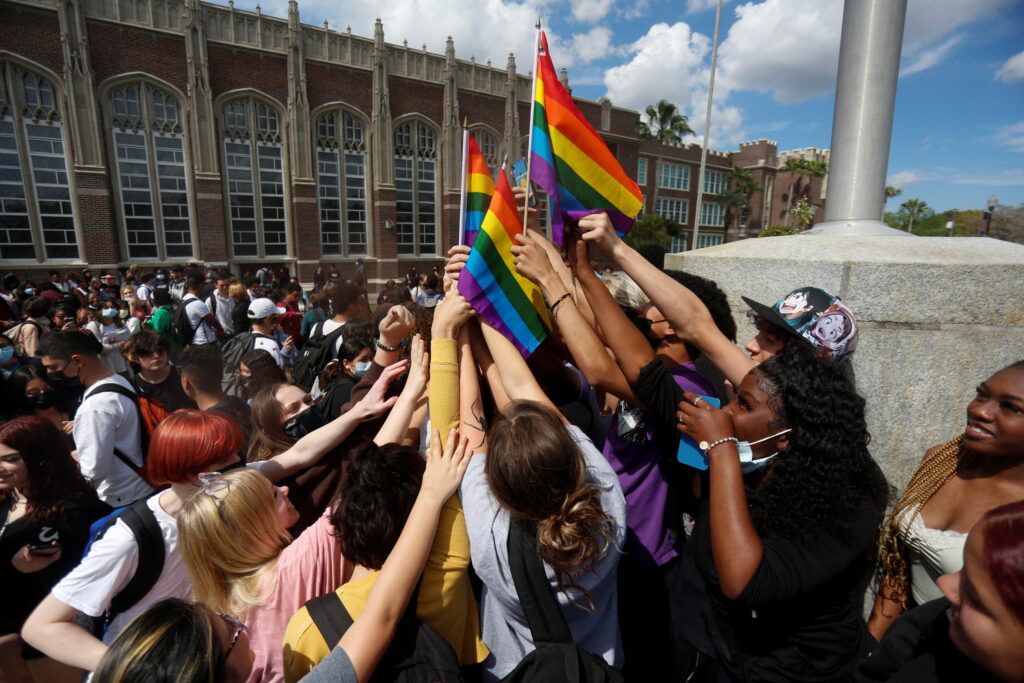 Washington, DC (March 17, 2022) — More Americans than ever now support rights for lesbian, gay, bisexual, transgender, and queer individuals (LGBTQ), according to a large new survey of more than 22,000 adults conducted by the Public Religion Research Institute (PRRI). The survey, which contains findings for all 50 states, is the latest in PRRI’s American Values Atlas project, a seven-year tracking survey measuring Americans’ support for LGBTQ rights policies at the state level since 2015.

“This massive 50-state study brings into sharp focus the contradiction between increasing support for LGBTQ rights, including rights for transgender Americans, and the proliferation of laws seeking to restrict or abolish those rights over the last year,” said Robert P. Jones, Ph.D., founder and CEO of PRRI. “Support for nondiscrimination protections for LGBTQ Americans has never been higher and garners the support of all political parties and major religious groups.”

Approximately eight in ten Americans (79%) favor laws that would protect gay, lesbian, bisexual, and transgender people against discrimination in jobs, public accommodations, and housing. Support for these protections has increased eight percentage points since 2015 (71%).

More than eight in ten Democrats (89%) and independents (82%) and nearly two-thirds of Republicans (65%) favor nondiscrimination provisions for LGBTQ people. Since 2015, that number has increased among Democrats (78% to 89%), independents (73% to 82%), and Republicans (61% to 65%). Notably, solid majorities of all religious groups support laws protecting LGBTQ people from discrimination, including eight in ten white Catholics (80%) and Latino Catholics (83%) and six in ten white evangelical Protestants (61%).

Approximately two-thirds of Americans (66%) oppose allowing a small business owner in their state to refuse to provide products or services to gay or lesbian people if doing so would violate their religious beliefs. While attitudes have fluctuated since 2015, opposition to these religious exemptions is up seven points over this period (59%).

Nearly nine in ten Democrats (85%) and two-thirds of independents (66%), compared to only 44% of Republicans, oppose religiously based refusals to serve gay and lesbian people. Opposition to religiously based service refusals has increased among all partisan groups since 2015.

West Virginia is the only state in which less than a majority of residents (48%) oppose religiously based refusals to serve gay and lesbian people.

The survey was designed and conducted by PRRI among a total sample of 22,612 adults (ages 18 and up) living in all 50 states in the United States, 20,670 of whom are part of Ipsos’s Knowledge Panel. An additional 1,596 were recruited by Ipsos using opt-in survey panels to increase the sample sizes in smaller states. An additional 346 Hispanic Protestants were also recruited using opt-in survey panels. All oversamples are weighted into the full population. Interviews were conducted online from March 8–30, June 7–23, August 9–30, and October 18–November 9, 2021. Each of the four waves is weighted separately, but a total weight is used for reporting the combined dataset. The survey was made possible by generous support from the Arcus Foundation, the Evelyn and Walter Haas, Jr. Fund, the Gill Foundation, the Unitarian Universalist Veatch Program at Shelter Rock, and the E. Rhodes and Leona B. Carpenter Foundation.