Watch a video of the event here. 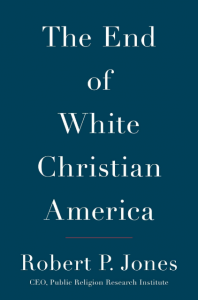 n his new book, The End of White Christian America (Simon & Schuster, 2016), Robert P. Jones, CEO of the Public Religion Research Institute (PRRI), discusses the stark demographic and cultural changes occurring in the United States. As the book’s title boldly states, white Christians are no longer the American majority, and the cultural and institutional world they built no longer sits at the center of American public life. How has this shift contributed to the rise of Donald Trump and increasing feelings of nostalgia and unease? Jones draws upon decades of polling data to explain how the political dominance of white Protestant Christians has waned in recent decades and the larger effect this decline in influence will have on the American populace.

On July 11, Governance Studies at Brookings will host Jones alongside Brookings Senior Fellows William A. Galston and E.J. Dionne, Jr. to examine what it means for America to no longer be a majority white Christian nation, and what influence this will have on the upcoming 2016 presidential election. How are the recent demographic and cultural changes shaping concepts of inequality, fairness, and religious freedom for future generations?

After the session, panelists will take audience questions.

Order your copy of The End of White Christian America from Amazon, Barnes & Noble, Simon & Schuster, and IndieBound today!