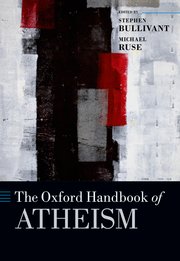 PRRI Research Associate Juhem Navarro-Rivera co-authored a chapter on “A World of Atheism: Global Demographics” with Ariela Keysar for the newly released book, The Oxford Handbook of Atheism. The essay describes the demography of the nonbelieving population around the world, estimated to be roughly seven percent of the world’s population, or between 450 to 500 million people. The authors find the typical global nonbeliever is young, male, and educated, and most likely lives in northern Europe, Japan, or communist or formerly communist nations. The essay’s estimates are derived from the International Social Survey Programme (ISSP) 2008 survey in which 40 countries took part.

Related Research
E Pluribus, Nullus
In Search of Secularism: “Reason Rally” Gathers Non-Believers on the National Mall
Why Do Some Atheists Go to Church?
Thanks for signing up!
Tweet
Tweet
Tweet