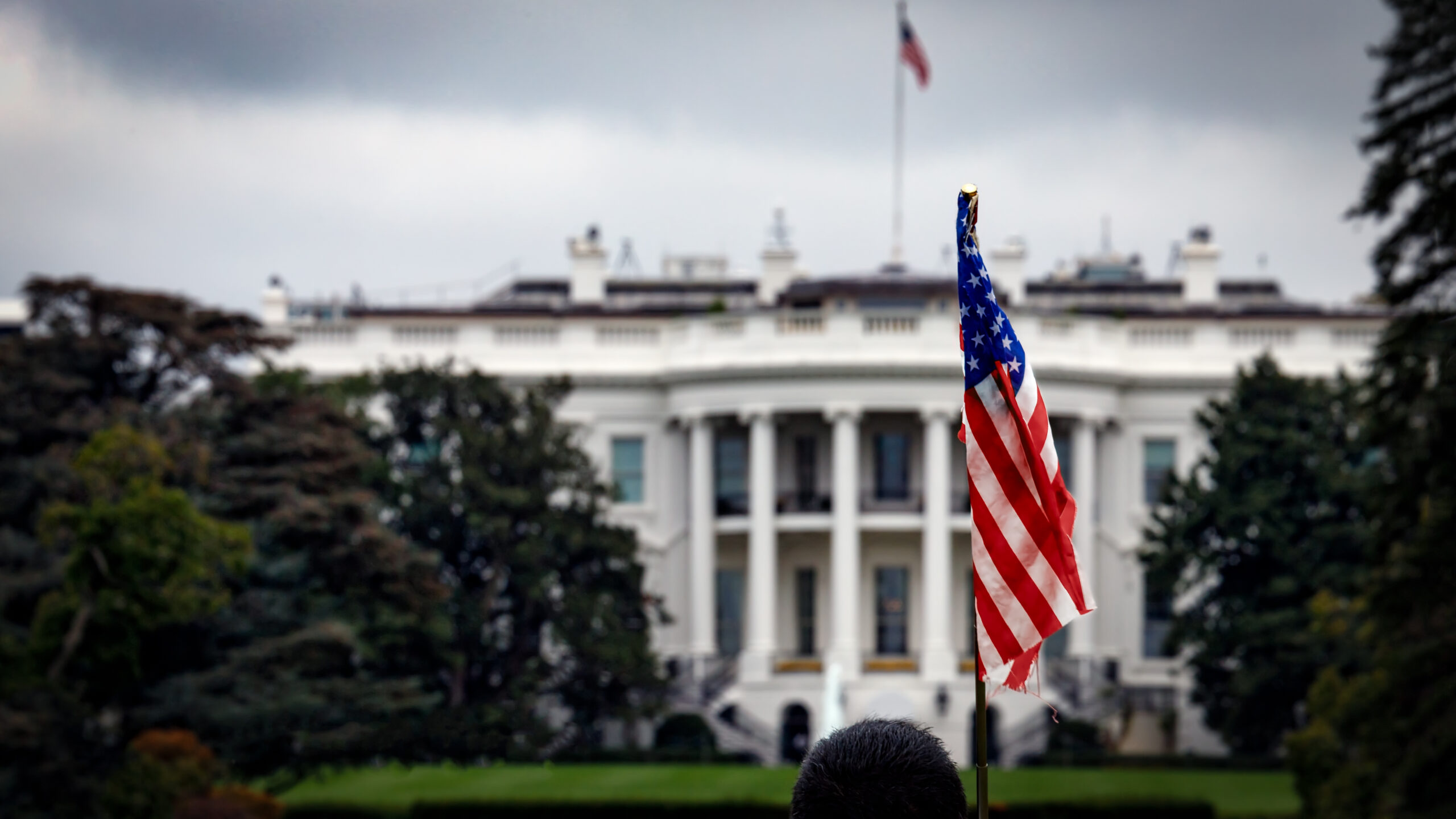 How Widespread Are QAnon Beliefs?

According to new data from a recently released PRRI survey, the share of Americans who believe in the main tenets of the QAnon conspiracy movement has increased slightly over the past year from 14% in March 2021 to 18% in March 2022. 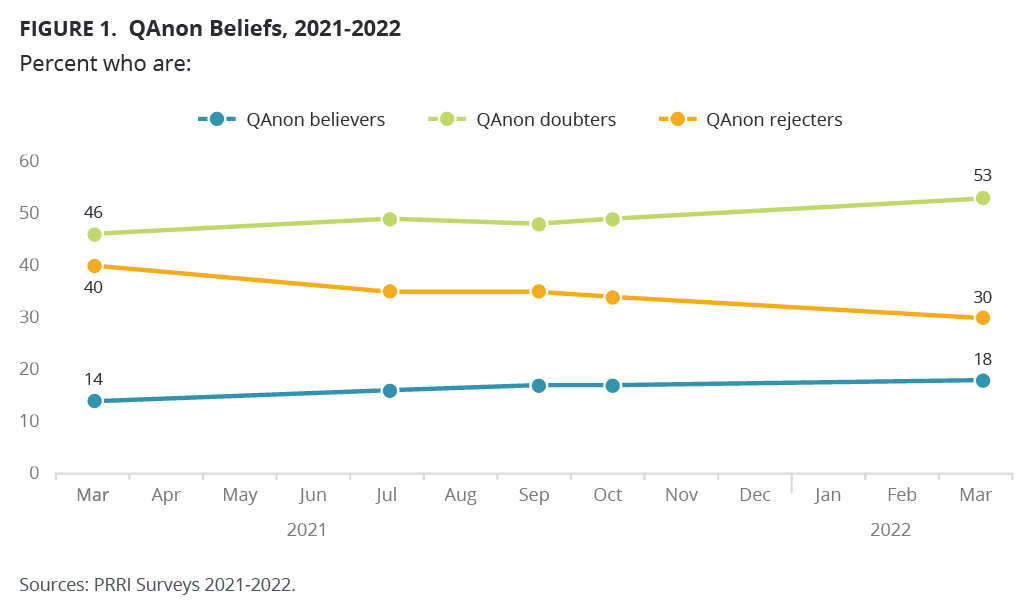 To assess overall belief in QAnon, PRRI tracks a composite measure from these three questions to group Americans into three key groups:

QAnon believers: Respondents who generally agree with these statements.

QAnon doubters: Respondents who mostly disagree with these statements.

QAnon rejecters: Respondents who completely disagree with all three statements.

Looking at the individual questions, currently, 27% of Americans agree that a storm is coming that will sweep away elites in power, 19% agree that violence may be necessary to save the country, and 18% agree that the government, media, and financial worlds are controlled by Satan-worshipping pedophiles. 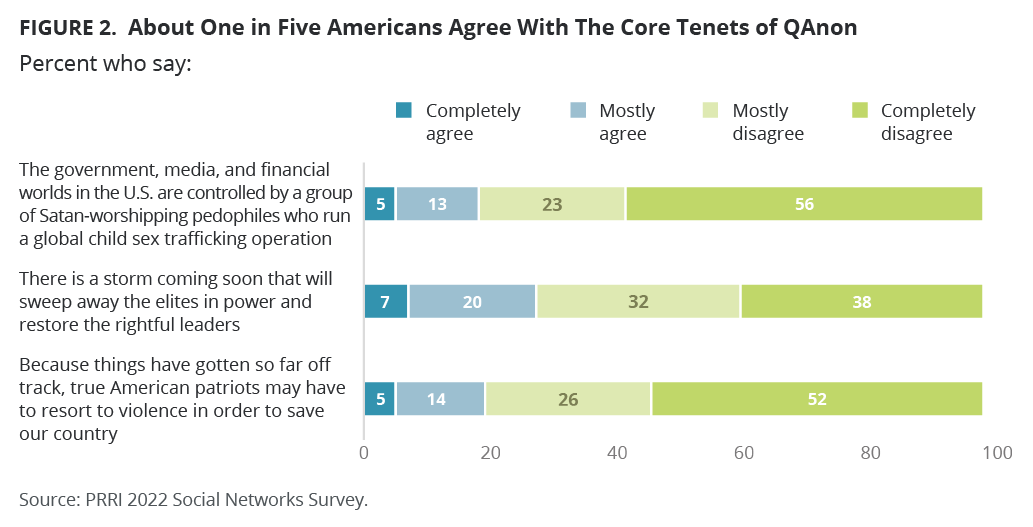 QAnon beliefs remain most prevalent among Republicans (26% are believers), compared to fewer independents (16%) and Democrats (10%). The share of QAnon doubters has grown among all partisan groups since March 2021: from 55% to 62% among Republicans, from 48% to 55% among independents, and from 35% to 45% among Democrats. 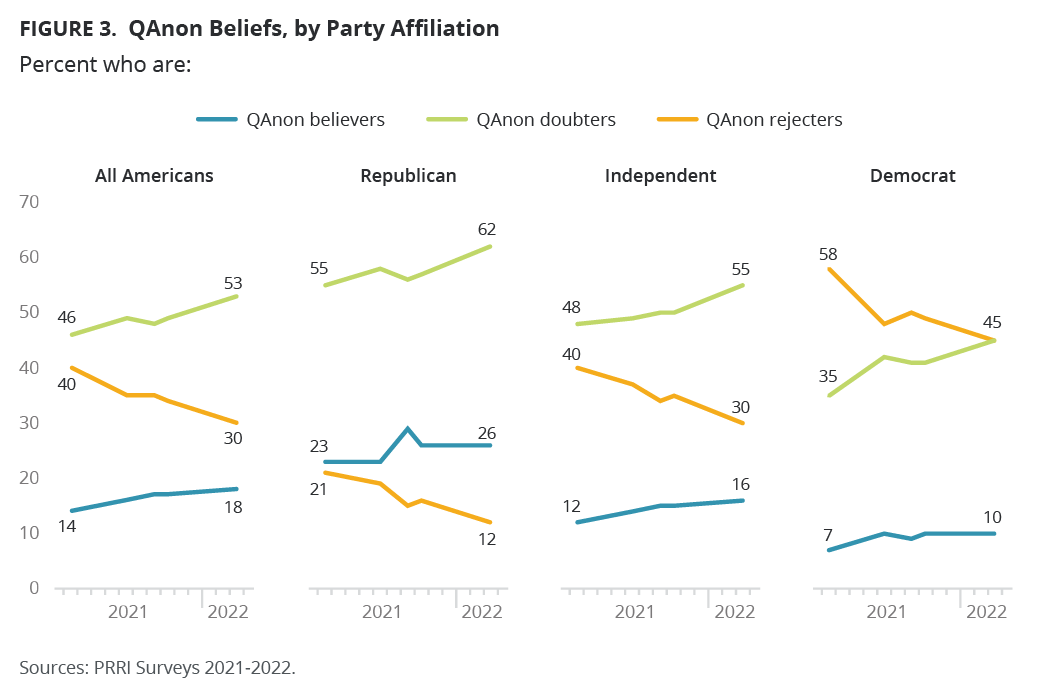 Conservative Americans, particularly those who most trust far-right media outlets like One American News Network (OANN) or Newsmax (38%), are most likely to be QAnon believers. Around one quarter of Americans who most trust Fox News (27%), white evangelical Protestants (27%), other Christians (27%), those with a high school diploma or less formal education (27%), and Republicans (26%), are QAnon believers. 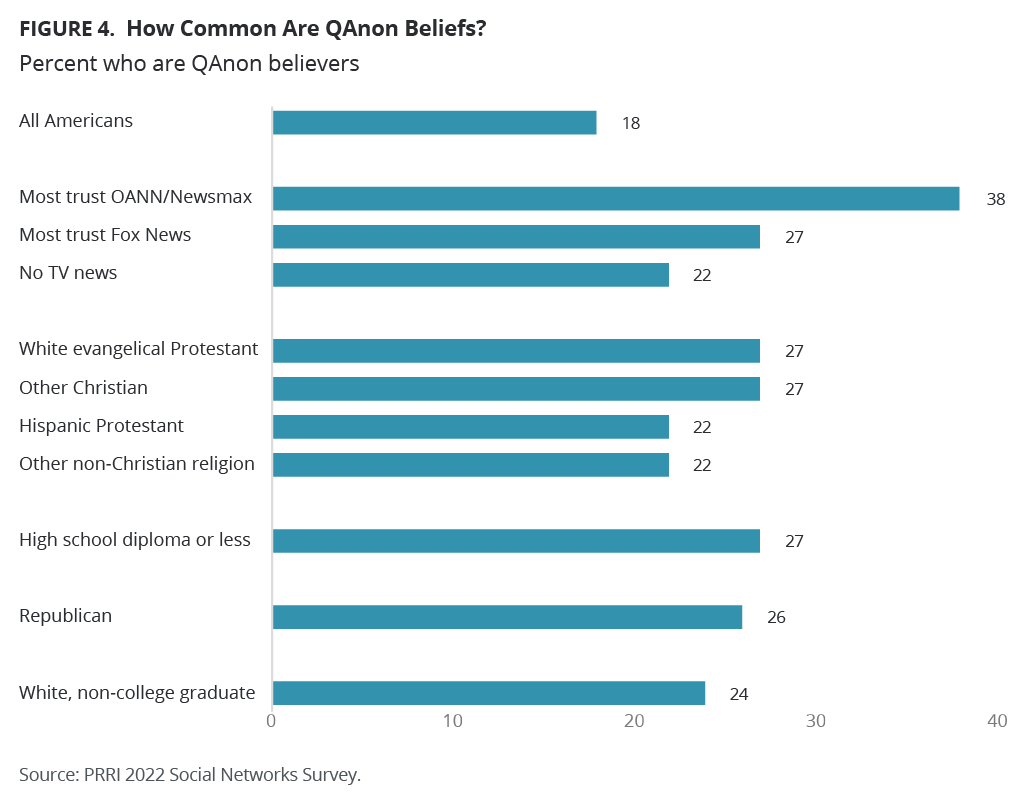 Many QAnon believers express strong Christian nationalist beliefs. Seven in ten QAnon believers (71%) agree with the statement that “God has granted America a special role in human history,” compared to half (49%) of doubters, and 15% of rejecters.

QAnon believers broadly feel a sense of cultural threat on a variety of issues. Nearly two-thirds of QAnon believers (64%) say that American culture and way of life have mostly changed for the worse since the 1950s, compared to 54% of QAnon doubters, and 34% of QAnon rejecters.

Additionally, two-thirds of QAnon believers (65%) agree that being born in America is at least somewhat important to being “truly American,” and 88% say the same about being able to speak English. QAnon doubters (48%) and rejecters (24%) are much less likely than believers to say being born in America is important. However, doubters (84%) are similarly likely to believers to say being able to speak English is important to being truly American, along with 61% of rejecters. 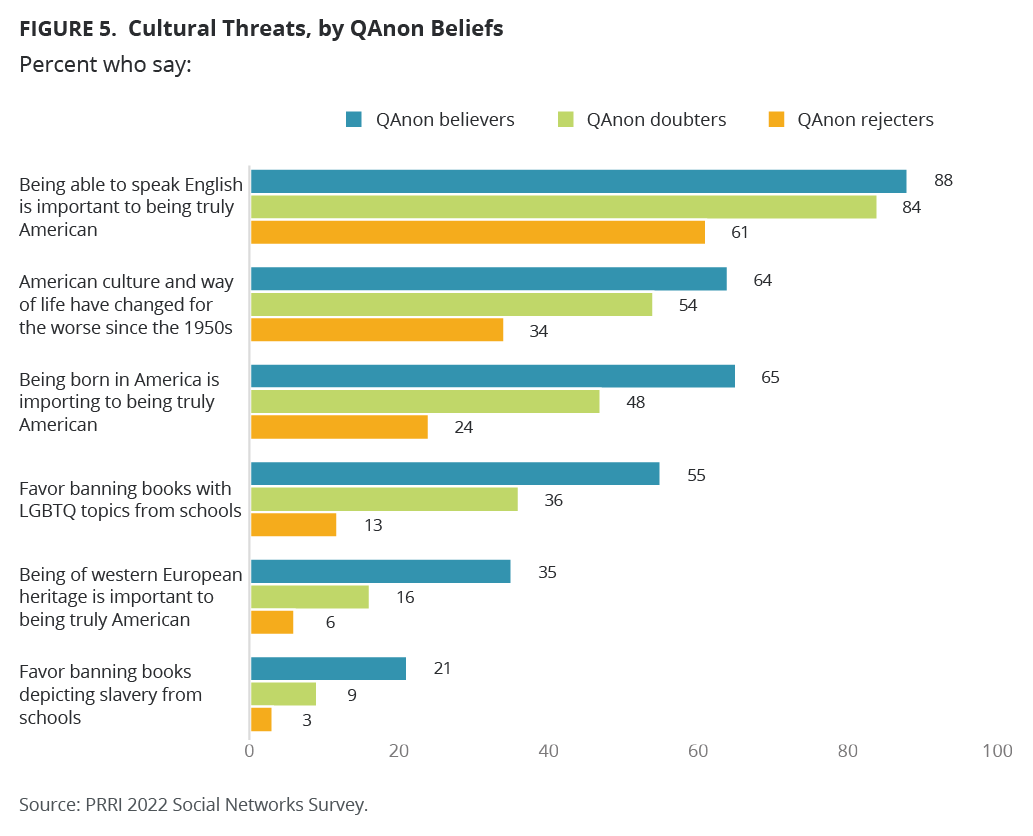 The Social Networks of QAnon Believers

This survey included an extensive series of questions about respondents’ social networks. Respondents were asked to name people with whom they “discussed important matters” in the previous six months, regardless of the nature of the relationship or the frequency of interaction.

By and large, the demographic composition of the social networks of QAnon believers is similar to those of all Americans. The main exception is in the political composition of social networks: QAnon believers are less likely to have networks comprised solely of Democrats (6%), compared to doubters (10%), or rejecters (16%), and are correspondingly more likely to have a network made up of only Republicans (17%), compared to 11% of doubters and 4% of rejecters.

QAnon believers tend to have social circles that have more overlap and geographic proximity than doubters or rejecters. Believers are more likely to report that all or most of the people they listed in their social networks regularly talk to each other (64%), compared to fewer doubters (56%) and rejecters (52%). More than two-thirds of believers say all or most of the people listed in their networks live within a two-hour drive (69%), compared to a similar share of doubters (68%), but slightly fewer rejecters (63%).

More than one-third of QAnon believers say that they talk about politics with all or most of their social network (37%), compared to a similar share of doubters (39%), and a larger share of rejecters (47%). Interestingly, QAnon believers (22%) are more likely than doubters (11%) or rejecters (6%) to say they talk about politics with no one in their social networks.

QAnon believers (37%) are more likely than doubters (28%) or rejecters (20%) to say they talk about religion with all or most of the contacts in their network. 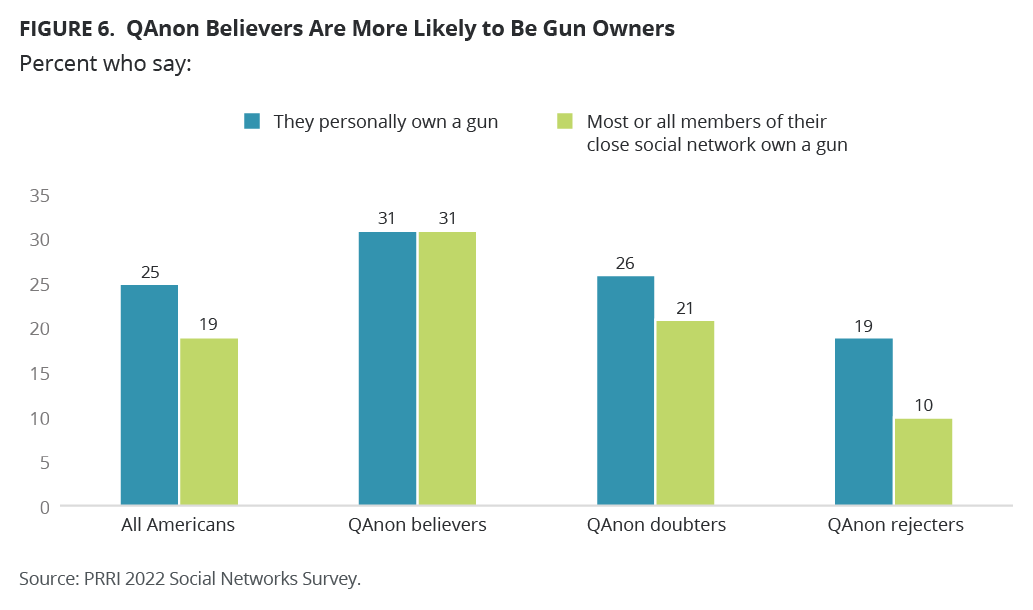 [1]Agree-disagree questions can sometimes have “acquiescence” bias due to a tendency for people to be agreeable in surveys. However, these specific questions are likely more robust due to their extreme content and are generally consistent with other estimates of believing in these conspiracy theories.