A new PRRI survey finds white evangelical support for President Trump at an all-time high, with 75 percent holding a favorable view of the president and just 22 percent holding an unfavorable view. This level of support is far above support in the general population, where Trump’s favorability is at 42 percent. 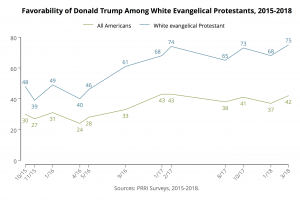 Looking ahead to the 2020 election, Trump’s support among white evangelicals is also strong. White evangelical Protestants who identify with or lean toward the Republican Party say they would prefer Donald Trump, rather than another candidate, to be the GOP nominee for president in 2020 (69 percent vs. 23 percent).