The far-right conspiracy theory movement known as QAnon emerged on the internet in late 2017 and gained traction throughout former president Donald Trump’s time in office. QAnon’s core theory revolves around Satan-worshipping pedophiles plotting against Trump and a coming “storm” that would clear out those evil forces, but the movement has also been described as a “big tent conspiracy theory” that involves a constantly evolving web of schemes about politicians, celebrities, bankers, and the media, as well as echoes of older movements within Christianity, such as Gnosticism.

To understand how this loosely connected belief system is influencing American politics, religion, and media, we fielded three questions, each containing a tenet of the QAnon conspiracy movement. 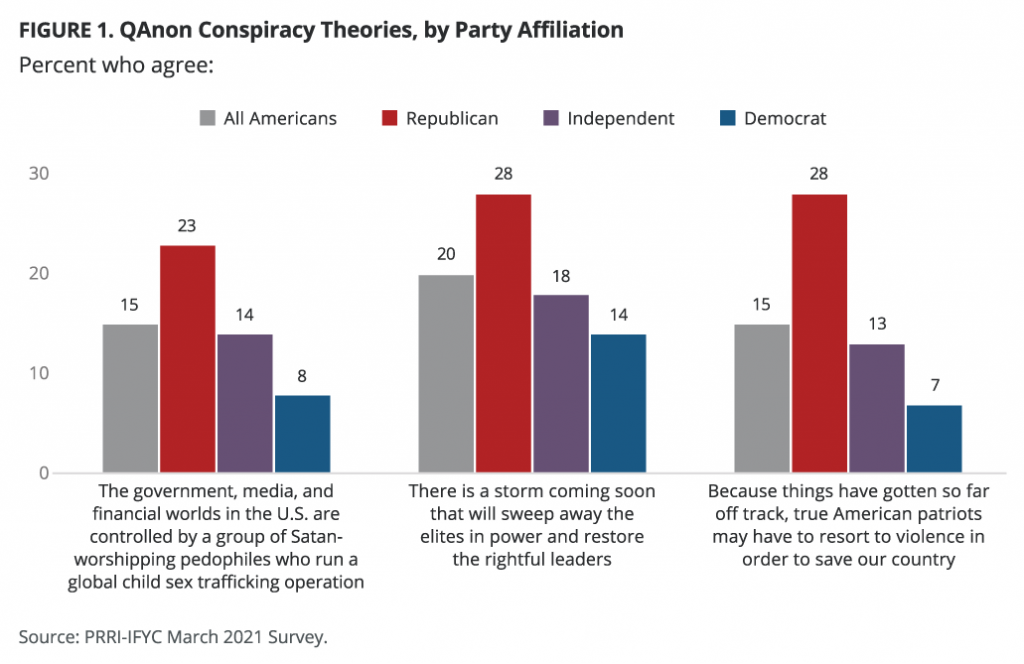 Similarly, one in five Americans (20%) agree with the statement “There is a storm coming soon that will sweep away the elites in power and restore the rightful leaders,” while a majority (77%) disagree. Nearly three in ten Republicans (28%), compared to 18% of independents and 14% of Democrats, agree with this secondary QAnon conspiracy theory. Trends among demographic groups are similar to those of the core QAnon conspiracy theory.

The sources that Americans turn to for news are closely linked with openness to QAnon views. Americans are most likely to say the television news sources they trust most to provide accurate information about politics and current events are the major broadcast networks (17%), such as ABC, CBS, and NBC. One in ten or more report most trusting local television news (13%), Fox News (11%), and CNN (10%). Fewer rely on public television (8%), MSNBC (5%), and far-right news networks (3%) such as One America News Network (OANN) and Newsmax. Three in ten (30%) say that they do not watch television news, and 2% report turning to some other source.

Around four in ten Americans who say they most trust far-right news outlets such as OANN and Newsmax (40%) for television news agree with the statement that “the government, media, and financial worlds in the U.S. are controlled by a group of Satan-worshipping pedophiles who run a global child sex trafficking operation.” Around one in five Americans who do not watch television news (21%) and trust Fox News (18%) agree. Around one in ten Americans or less who trust local news (12%), CNN (11%), broadcast networks such as ABC, CBS, and NBC (8%), public television (7%), and MSNBC (5%) believe this core tenet of QAnon.

Nearly half of Americans who trust far-right news (48%) and one-third who trust Fox News (34%) agree with the statement that “There is a storm coming soon that will sweep away the elites in power and restore the rightful leaders.” About one in five who do not watch television news (22%), those who report trusting local news most (18%), and those who report trusting CNN most (17%) agree with this theory. Fewer Americans who trust MSNBC (14%), broadcast news (12%) or public television (11%) agree.

Around four in ten Americans who most trust far-right news sources (42%) and around one in four who most trust Fox News (27%) agree that “Because things have gotten so far off track, true American patriots may have to resort to violence in order to save our country.” Less than one in five Americans who do not watch television news (19%) or who trust local news (16%) agree, and less than one in ten who trust CNN (9%), broadcast news (8%), public television (7%), or MSNBC (7%) agree. 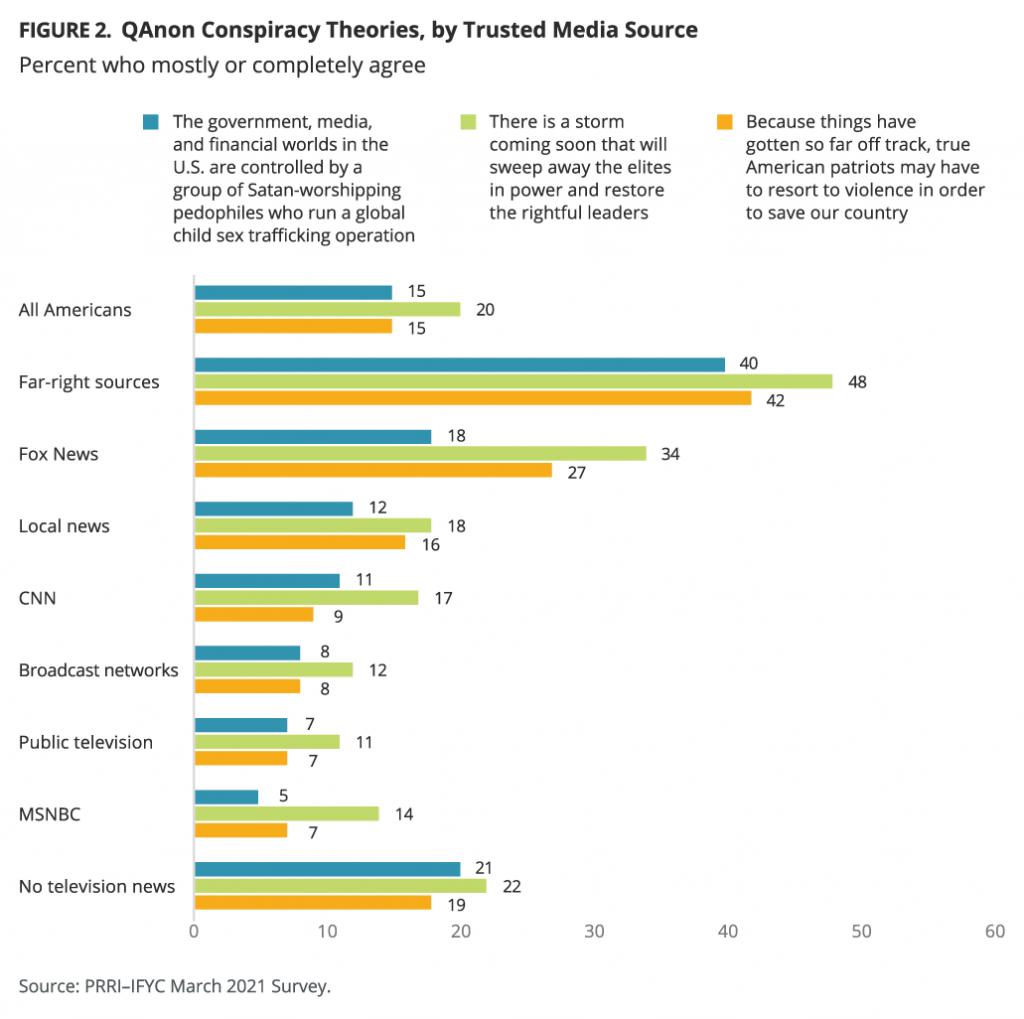 Generally speaking, across all three questions, white evangelical Protestants, Hispanic Protestants, and Mormons are more likely than other groups to agree with each of these tenets of the QAnon conspiracy movement.

Hispanic Protestants (26%), white evangelical Protestants (25%), and other Protestants of color (24%) are more likely than other religious groups to agree that the government, media, and financial worlds in the U.S. are controlled by a group of Satan-worshipping pedophiles who run a global child sex trafficking operation.[1] Less than one in five Mormon (18%), Hispanic Catholic (16%), Black Protestant (15%), other Christian (14%), non-Christian religious (13%), white Catholic (11%), religiously unaffiliated (11%), white mainline Protestant (10%), and Jewish Americans (8%) agree with this statement.[2]

Approximately one in four or more Hispanic Protestants (29%), Hispanic Catholics (27%), white evangelical Protestants (26%), Black Protestants (25%), other Protestants of color (24%), and other Christians (24%) agree that there is a storm coming that will sweep away the elites in power. Fewer Mormons (22%), white Catholics (19%), white mainline Protestants (18%), and members of other non-Christian religions (17%) agree. Religiously unaffiliated (12%) and Jewish Americans (6%) are the least likely to agree with this statement. 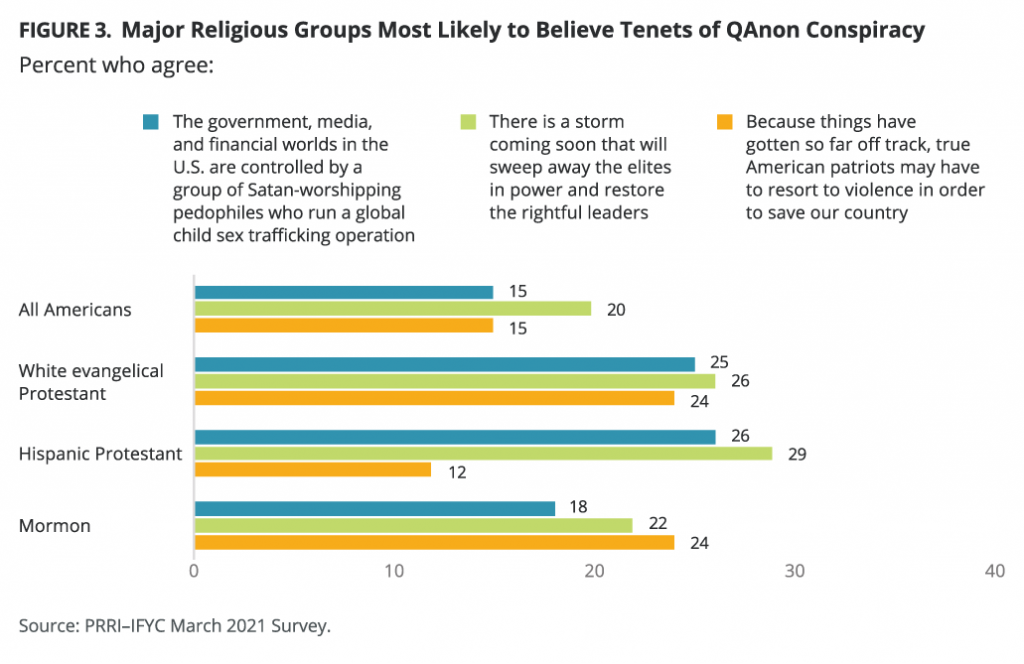 A Profile of QAnon Believers 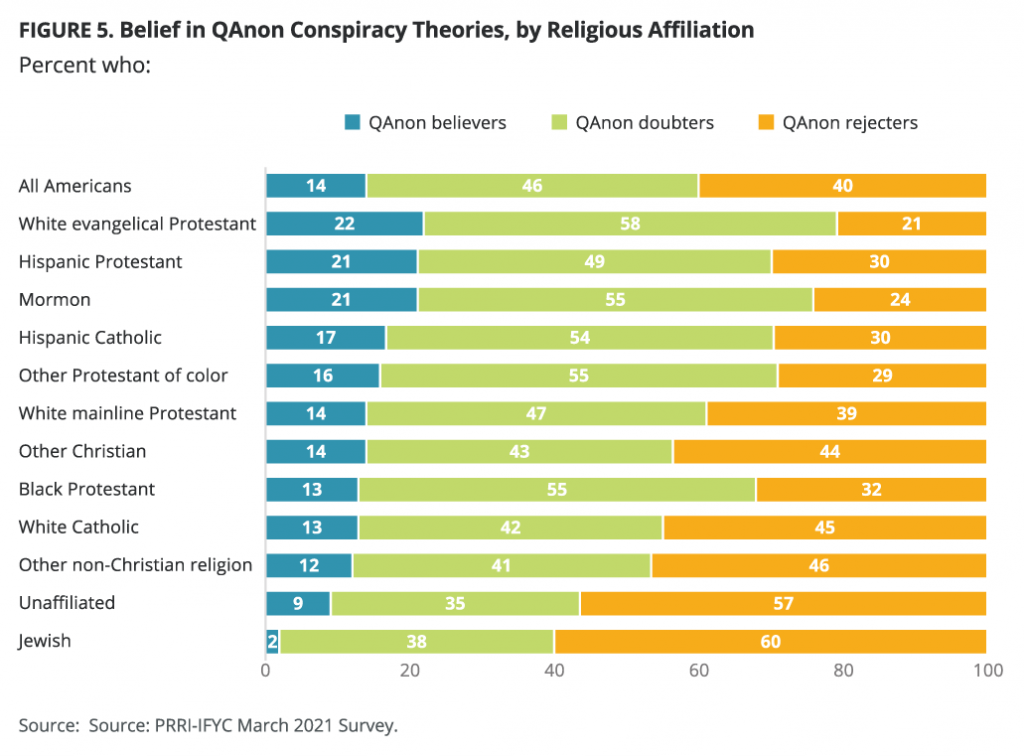 Modeling Those Most Likely to Agree With QAnon Conspiracy Theories

PRRI constructed a logistic regression model to explain which characteristics are independently associated with QAnon conspiracy beliefs. In the table below, the dependent variable is the QAnon believer category from the QAnon Conspiracy Scale above. 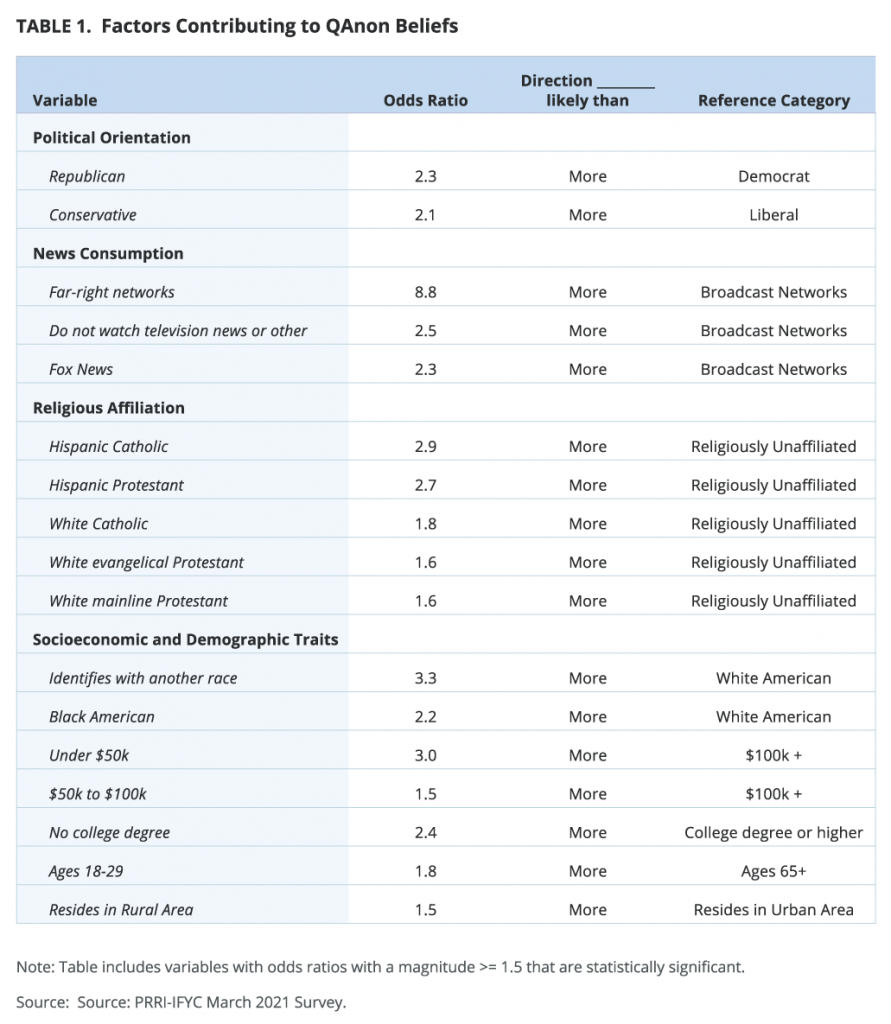 Interestingly, even after controlling for partisanship and ideology, media news consumption is by far the strongest independent predictor of QAnon beliefs. Remarkably, those who report most trusting far-right media sources are nearly nine times more likely to be QAnon believers compared to those who most trust broadcast networks such as ABC, CBS, and NBC. Those who most trust Fox News and those who do not watch television news are 2.3 and 2.5 times, respectively, more likely than those who watch broadcast networks to be QAnon believers.

Even with a range of controls in place, Republicans and conservatives are twice as likely as Democrats and liberals to be QAnon believers.

Americans of other races and Black Americans are more likely than white Americans to agree with the conspiracy theories, but this is likely due to the fact that race, party, ideology, and religious affiliation are also in the model. Lower education, male gender, lower income, lower age, and living in rural areas are also associated with higher likelihoods of QAnon beliefs.

The Association Between QAnon Beliefs and Other Conspiracy Theories

A small segment of Americans (9%) agree that the COVID-19 vaccine contains a surveillance microchip that is the sign of the beast in biblical prophecy. This figure jumps to 39% among QAnon believers, but only 6% of QAnon doubters and 1% of QAnon rejecters agree. 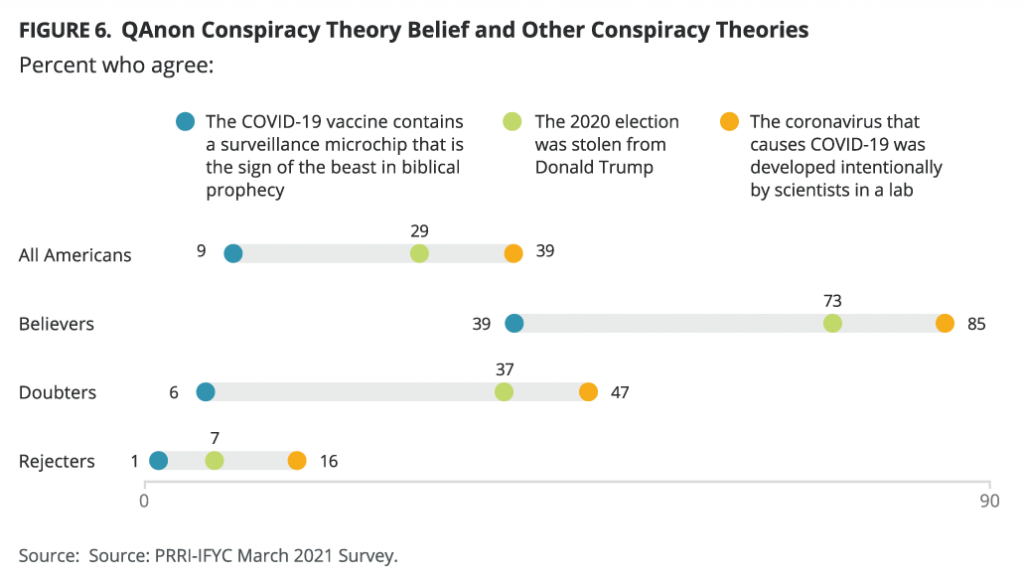 The survey was designed and conducted by PRRI and IFYC among a random sample of 5,149 adults (age 18 and up) living in all 50 states in the United States and who are part of Ipsos’s Knowledge Panel and an additional 476 who were recruited by Ipsos using opt-in survey panels to increase the sample sizes in smaller states. The full sample is weighted to be representative of the U.S. population. Interviews were conducted online between March 8 and 30, 2021.

Respondents are recruited to the KnowledgePanel using an addressed-based sampling methodology from the Delivery Sequence File of the USPS – a database with full coverage of all delivery addresses in the U.S. As such, it covers all households regardless of their phone status, providing a representative online sample. Unlike opt-in panels, households are not permitted to “self-select” into the panel; and are generally limited to how many surveys they can take within a given time period.

The initial sample drawn from the KnowledgePanel was adjusted using pre-stratification weights so that it approximates the adult U.S. population defined by the latest March supplement of the Current Population Survey.  Next, a probability proportional to size (PPS) sampling scheme was used to select a representative sample.

These weights from the KnowledgePanel cases were then used as the benchmarks for the additional opt-in sample in a process called “calibration.” This calibration process is used to correct for inherent biases associated with nonprobability opt-in panels. The calibration methodology aims to realign respondents from nonprobability samples with respect to a multidimensional set of measures to improve their representation.

The margin of error for the national survey is +/- 1.5 percentage points at the 95% level of confidence, including the design effect for the survey of 1.4. In addition to sampling error, surveys may also be subject to error or bias due to question wording, context, and order effects. Additional details about the KnowledgePanel can be found on the Ipsos website:

[1] “Other Protestant of color” includes all Protestants who are not white, Black, or Hispanic (including Asian American or Pacific Islander, multiracial, Native American, and any other race or ethnicity). Categories were combined due to sample size limitations.

[2]“Other Christian” includes all Christians who are not specified in any other category, including Catholics who are Black, Asian American or Pacific Islander, multiracial, Native American, and any other race or ethnicity; Jehovah’s Witnesses; Orthodox Christians; and any other Christian group. “Other non-Christian religion” includes those who are Muslim, Hindu, Buddhist, Unitarian Universalist, and any other world religion. Categories were combined due to sample size limitations. 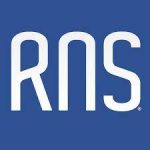 Religion News Service
I Believe! … In QAnon? What nonbelievers don’t get about conspiracy beliefs

The Washington Post
New data bolsters the idea that the far-right media ecosystem is a conspiracy-theory Petri dish
Thanks for signing up!