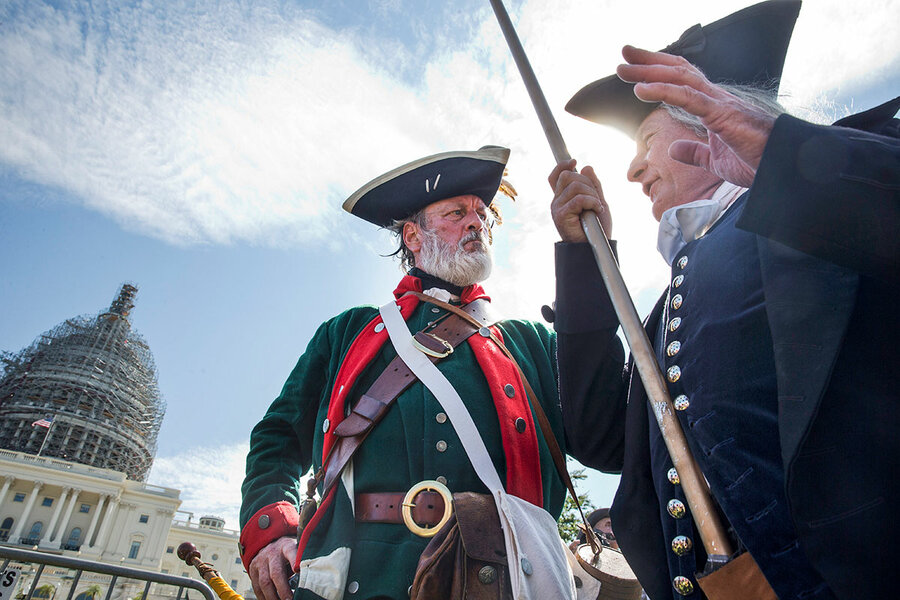 Why America’s Founding Is a Conservative Touchstone

Noah Robertson for the Christian Science Monitor explores the tendency of right-leaning Americans to invoke our nation’s founding as an integral part of their appeal and campaign. This comes with calls to act as “patriots” in the fight against “tyranny.” In areas with high concentrations of Republicans, the Gadsden flag and Confederate flags and statues are symbols of pride. Robertson analyzes how iconography “has long been a hallmark of the American right” and is becoming even more prevalent today. Amy Cooter, a sociologist at Vanderbilt University, stated: “The uproar about instruction related to race in schools, in particular, often stems from conservatives sensing critiques of the country’s founding.” Robertson then highlights that understanding how to make issues like race less controversial means deciphering why the founding and founders of our nation are so essential to those “right of the center.”

J. David Goodman for The New York Times reported on the recent closing of the National Butterfly Center, located along the banks of the Rio Grande in Texas, which “has become the latest unlikely victim” of misinformation spreading like wildfire online. The article cites PRRI research that found 23% of Republicans surveyed said they believe the QAnon conspiracy theory’s central belief that “government, media, and financial worlds are controlled by a group of Satan-worshipping pedophiles who run a sex-trafficking operation.” According to conspiracies similar to “Pizzagate” at a Washington, DC, pizzeria, the private butterfly reserve is said to be “a cover for human smuggling, sex trafficking and the exploitation of children.” Goodman writes how, in recent years, these theories have become so magnified that the center is now receiving visitors completely divorced from an interest in butterflies. In one instance, a man from a media organization associated with Steve Bannon recorded a video outside the center’s gates, claiming “credible threats of the cartels trafficking children through the butterfly center.” In another situation, a border security gathering brought together conservative activists who marched on a section of the border wall near the center, “some armed with long guns, others singing ‘Amazing Grace.‘ The leader of the center was concerned that the conspiracy theories could lead to violence, citing the mass killer who targeted Hispanic shoppers at a Walmart in El Paso amid “a similarly heated debate over border security.”

Two for One: Conversations at The Meeting House with Dwight A. Moody

In his latest #WhiteTooLong Substack post, PRRI founder and CEO Robert P. Jones shares two complementary conversations about white Christian nationalism, including a discussion with Paul Djupe, a PRRI Affiliated Scholar, on what the best political science data tells us about white Christian nationalism. The other is between the Rev. Dwight A. Moody and Jones on the 2021 Capitol insurrection, the rise of Christian nationalism, and voting rights. Jones and Moody discuss how “millions of people” were shocked to see “Christian symbols, prayers, and rhetoric mixed freely with a sickening cocktail of lies, conspiracies, racism, and antisemitism.” The discussion revolves around the growing resentment of the politics of white Christians and the dangers of political leaders blurring the lines with religion. As an explanation for the rise of Christian Nationalism, Jones states: “I do think it is the sense of losing control. Demographics are shrinking. And so what happens is, if you lose the ability to influence the culture through just being the majority and through winning elections fair and square, your next alternative—if winning is what matters at all costs—is violence.”

Moody and Jones also discussed PRRI research that found two-thirds of Republicans believe the election was stolen, and also that three in ten Republicans state support for political violence because things in America have gotten so far off track. “That’s three in ten people in a mainstream party, and it’s 26% of white evangelicals,” Jones notes. Additionally, they cite how believing that God has granted America a special role makes a person twice as likely to support political violence as those who don’t. Moody and Jones discussed their wariness surrounding the 2024 elections and pointed to a piece in The Atlantic: “January 6th Was Practice.”