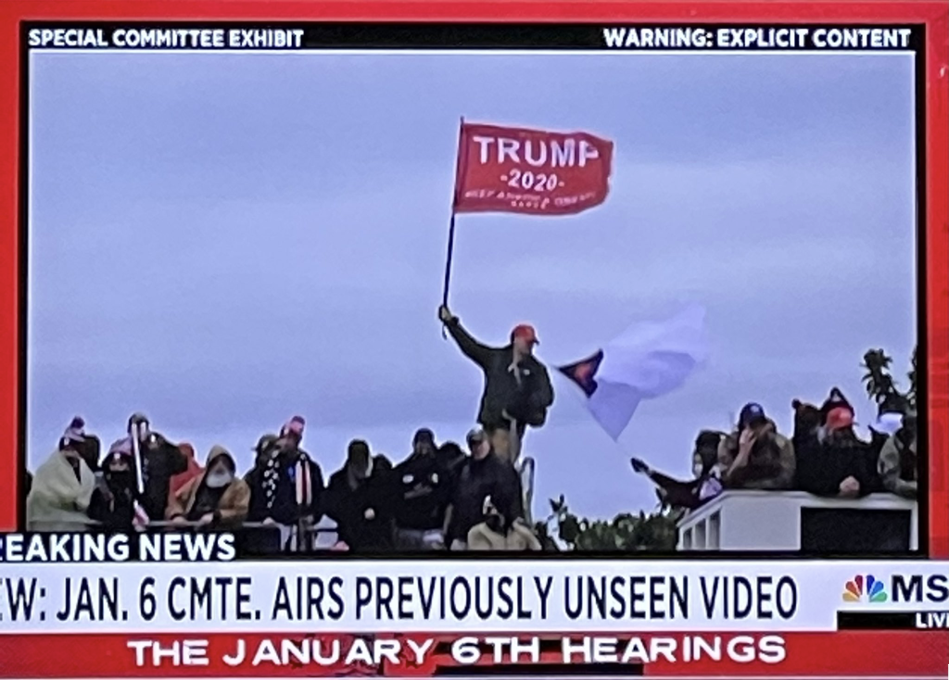 White Christian Nationalism on Display at the Jan. 6 Committee Hearing

Last night, the U.S. House of Representatives’ Select Committee to Investigate the January 6th Attack on the United States Capitol held the first of several televised public hearings. For those who watched, it was a startling reminder of the violence unleashed that day and the courage of the U.S. Capitol Police and Metropolitan Police officers who placed their lives on the line to defend the government from attacks by enemies of democracy who were not foreign but domestic.

During the hearing, the committee showed a 12-minute video of the mayhem. The closing frame of the video contained a stark image of two flags being flown by the insurrectionists: a Trump flag and the Christian flag—the same white flag with a blue canton containing a red Latin cross that sits in Protestant Christian sanctuaries all over the country.

To watch the closing seconds of that video with these flags, click here.

PRRI founder and CEO Robert P. Jones reflected on the events of January 6th in a column published the next day by Religion News Service. An excerpt is below; read the entire column of his Substack newsletter here.

“There were crosses, ‘Jesus Saves’ signs and ‘Jesus 2020’ flags that mimicked the design of the Trump flags. Some of the participants, organized as part of a ‘Jericho March,’ blew shofars—Jewish ritual horns—as they circled the Capitol, reenacting the siege of the city of Jericho by the Israelites described in the Book of Joshua in the Hebrew Bible. And one video showed the Christian flag —white, with a blue canton containing a red cross, used by many white evangelical churches—being paraded into an empty congressional chamber after the doors had been breached and members of Congress evacuated. I recall that same flag standing behind the pulpit of my Mississippi Southern Baptist church, where as a child I was led in a pledge of allegiance to both the American and Christian flags….

“This seditious mob was motivated not just by loyalty to Trump, but by an unholy amalgamation of white supremacy and Christianity that has plagued our nation since its inception and is still with us today.”

Jones expands upon the threat of white Christian nationalism reflected in the January 6th insurrection in a new Afterword of the paperback edition of his book, “White Too Long: The Legacy of White Supremacy in American Christianity.”

Other Resources on Jan. 6 and White Christian Nationalism

At the one-year anniversary of the insurrection, PRRI found that Republicans remain entangled in the Big Lie, QAnon, and temptations toward political violence. More than two-thirds of Republicans (68%), including 82% of Republicans who most trust Fox News, believe the 2020 election was stolen from Donald Trump. Those who believe the 2020 election was stolen from Trump are also four times as likely as those who disagree to believe “true American patriots might have to resort to violence in order to save our country” (39% vs. 10%).

The Baptist Joint Committee for Religious Liberty and the Freedom From Religion Foundation released a comprehensive report on the link between Christian nationalism and the January 6th insurrection. The report draws on the work of leading scholars, including Andrew L. Whitehead and Samuel L. Perry, Anthea Butler, Jemar Tisby, Katherine Stewart, Amanda Tyler, and Andrew Seidel.

The Religion News Service (RNS) has compiled its coverage of the aftermath and effect of the insurrection, including the effort of white Christians to forge their own “nationalist internet,” how the attack rapidly expanded the Christian-right following, and the story of how the Unite the Right rally changed one woman’s