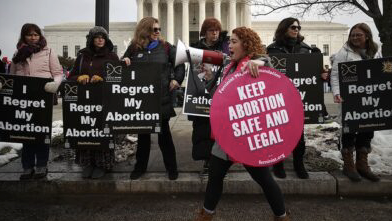 Which Women Are Most Likely To Favor Abortion Restrictions?

PRRI Research Associate Diana Orcés, Ph.D., authored a recent spotlight analysis documenting American womens’ stances on a range of issues related to reproductive health, based on a recent PRRI survey fielded after the overturning of Roe v. Wade. Orcés notes that women who live in the 13 states with “trigger laws” outlawing abortion are more likely to favor those restrictions than women who live in other states. On the subject of birth control, 84% of Americans oppose laws that would restrict what types of contraception can be used to prevent pregnancy, but only 12% of women favor such laws. Women without a college degree are twice as likely as women with a college degree to favor restrictions (15% vs. 6%).

A majority of Republican women favor laws that would make it illegal to obtain an abortion after six weeks of pregnancy (60%), and even more Republican women favor bans after 15 weeks (73%). Among Democratic women, approximately two in ten favor both 6-week and 15-week bans (18% and 22%, respectively). Women in all racial groups are more likely to favor bans that include exceptions for cases of rape and incest than bans that only make an exception for saving the mother’s life. About one-third of Republican women (34%), 15% of independent women, and 12% of Democratic women favor laws that would make it illegal to cross state lines to obtain an abortion.

What Are Americans Paying Attention To?

Christian Nationalism: The GOP as ‘God’s Own Party’

Author Jonathan Wilson-Hartgrove writes for TIME Ideas on the prevalence of Christian nationalism. He uses the work of author Anne Nelson to chronicle how one of the founders of the religious right in the 1970s, Paul Weyrich, helped to found the Council for National Policy, made up of leaders within the Republican Party and religious right, the National Rifle Association, churches, and more. Hundreds of millions of dollars were invested in promoting the Christian nationalist narrative, which helped convince many communities “that the GOP was God’s Own Party.”

Wilson-Hartgrove criticizes the apparent hypocrisy of the “pro-life” element within contemporary Christian nationalism, noting U.S. Supreme Court justices who “lied in their confirmation hearings, overturned Roe v. Wade, and stripped the Environmental Protection Agency of its power to save lives by mitigating the climate crisis.” He also chides conservative politicians who prioritize pro-life matters but then failed to extend the monthly child tax credit, which moved almost 4 million American children into poverty upon its expiration. In closing, he notes a March 2022 PRRI poll finding that “most religious Americans” opposed ending protections under Roe, with the only exceptions being white evangelical Protestants and Latter-day Saints, “the religious communities most directly targeted by efforts to promote Christian nationalism.”