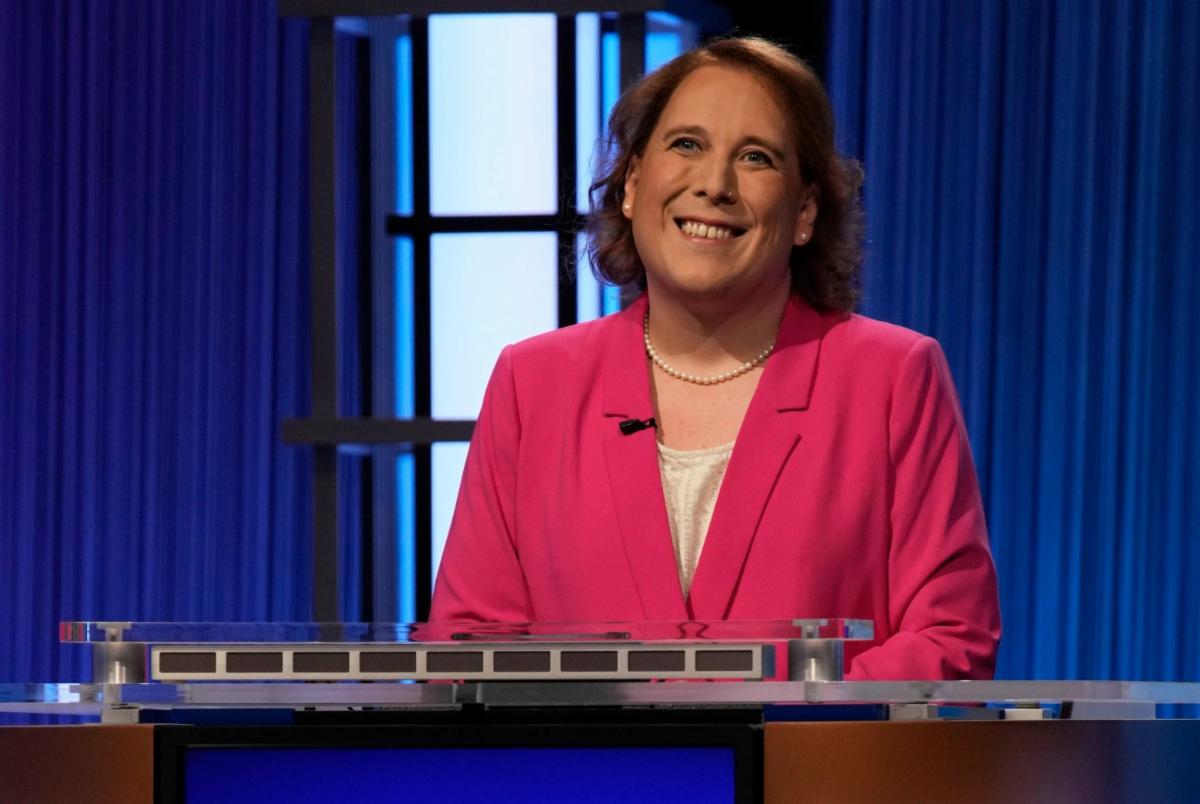 What a Trans Woman’s ‘Jeopardy’ Success Means for Transgender Rights

Martha Ross for The (San Jose, California) Mercury News reports on the triumph of Amy Schenider, the trans woman who recently won a record 40 games and $1.3 million on the renowned game show Jeopardy. The 42-year-old Ohio native has “emerged as an LGBTQ icon,” providing many of the traditionally older and more conservative Jeopardy viewers their first experience, even if solely on the screen, of observing a transgender person. “Once people accept trans people, they don’t go back,” Schneider told Ross. “I get the impression that I’ve moved some people into the acceptance camp, and I hope that’s true.”

Her success coincides with record attacks on LGBTQ people through discriminatory legislation in many parts of the country, according to the Human Rights Campaign. Susan Stryker, author of “Transgender History” and professor at Mills College, described Schenider as “a breath of fresh air.” Amidst intense domestic cultural debate, she has allowed people “a chance to see a trans person in public without it being caught up in polarizing debates about trans issues.” Ross highlights that a decade ago, America viewed trans people as “marginalized sex workers, targets of cisgender male panic, or deranged predators.” In the time since, the nation has seen positive movement for transgender people and their visibility, including the removal of “transgender identity” as a diagnosable condition in the American Psychiatric Association’s Diagnostic and Statistical Manual of Mental Disorders. Even so, the 2016 general election season was a turning point, with North Carolina adopting the first of many so-called “bathroom bills” that year. PRRI research from 2019 found that more than six in ten Americans said they had become more supportive toward transgender rights compared to their views five years earlier. Nearly a quarter of Americans reported having a close friend or family member who is transgender. Additional PRRI research from last year found that three in four Americans (75%) say they would be somewhat or very comfortable learning a coworker is transgender. Nearly seven in ten Americans (69%) say they would be somewhat or very comfortable having a close friend tell them they are transgender.

Newsweek Culture Writer Jon Jackson reports that followers of QAnon have “widely spread” Russian claims that the United States is operating a lab for biological weapons in Ukraine, an allegation that the Pentagon and the U.S. State Department have called “outright lies.” The conspiracy theory follows another one prevalent among QAnon believers that the war in Ukraine is actually “a secret mission backed by former President Donald Trump to destroy clandestine bioweapons labs created by Dr. Anthony Fauci,” chief medical advisor to President Joe Biden. The latter theory has also gained traction among participants in the “People’s Convoy” protest by truckers on the Capital Beltway outside of Washington, DC. Foreign Policy magazine reports that there are “hundreds of thousands” of messages about the biolab theory each day on unregulated platforms such as Telegram and 8chan, including accusations that Fauci is using the Ukrainian laboratory to create a new virus similar to COVID-19. White House Press Secretary Jen Psaki has called the claims “preposterous,” adding, “It’s the kind of disinformation operations we’ve seen repeatedly from the Russians over the years in Ukraine and in other countries, which has been debunked, and an example of the types of false pretexts we have been warning the Russians would invent.” PRRI surveys conducted in 2021 found that nearly one in five Americans (16%) are QAnon believers, a number that held steady throughout last year. The proportion of Americans who buy into QAnon theories increases among Republicans, as one in four (25%) are QAnon believers, compared to 14% of independents and 9% of Democrats.

Reya Kumar for The Tufts Daily, an independent student newspaper of Tufts University, recently analyzed both the “Don’t Say Gay” bill in Florida and Gov. Greg Abbott’s attempt in Texas to criminalize gender-affirming care for transgender youth. Kumar writes that, while the “Don’t Say Gay” Bill will not put any restrictions on a straight teacher or student from showing aspects of their families or lives, the legislation will “prevent children with same-sex parents from doing something as simple as drawing their family, or children who do not identify with the sex they were assigned at birth from expressing who they are.” Though much of the bill is aimed at giving parents more control within the education process, the bill specifically prohibits instruction on sexual orientation or gender identity from kindergarten through third grade. The issue is that the bill is not explicit, thereby intimidating teachers to censor their lessons for anything that could be considered LGBTQ-related for fear of legal ramifications. LGBTQ advocates warn that this bill will worsen the mental health and development of students, many of whom already experience discrimination, bullying, and suicide attempts.

Meanwhile in Texas, the new anti-trans directive which equates gender-affirming care with child abuse, calls for “licensed professionals and members of the general public” to report the parents of minors who are seeking or undergoing such care. As a result, Texas Children’s Hospital, the largest facility of its kind in the nation, has halted gender-affirming care for trans youth. Kumar highlights that gender-affirming health care is considered to be medically necessary by all major medical organizations, including the American Psychological Association and the American Medical Association. Devin English, an assistant professor at the Rutgers School of Public Health stated: “Our research indicates these state-level policy positions are linked to suicide risk among these youth, particularly LGBTQ youth of color.” PRRI research found approximately three in four Texans (73%) support LGBTQ nondiscrimination laws. For more PRRI research on America’s growing support for transgender rights, click here.