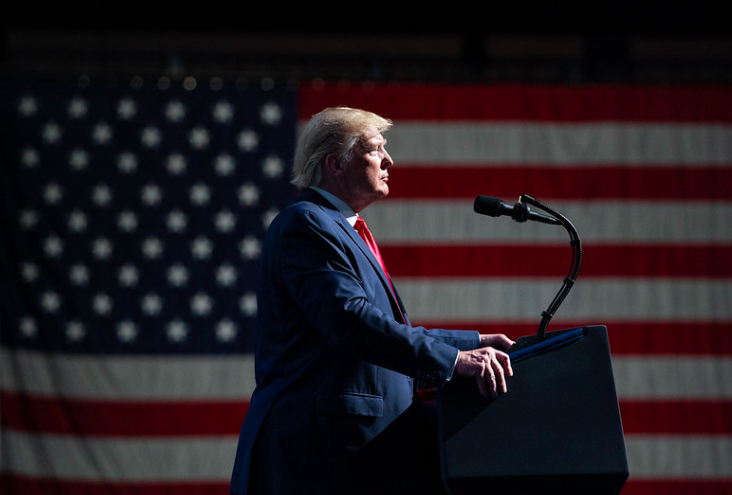 Trump Looks to Salvage Presidency by Casting China as a Scapegoat

In a new piece for The Atlantic, Peter Nicholas argues that to salvage his struggling presidency, President Trump is leaning into the “hard-edged nationalist” messaging strategy that helped him win four years ago. This time, though, Trump has a new target: China. According to Nicholas, when the coronavirus outbreak first began, Trump referred to Chinese president Xi Jinping in sympathetic and supportive terms, but lately has taken a more accusatory tone. In a news conference last week, Trump said the virus “could have been stopped in China, before it started, and it wasn’t. And the whole world is suffering because of it.” PRRI’s most recent survey finds that Republicans and Fox News viewers are significantly more likely to refer to the coronavirus as “Chinse Virus” than other Americans. The data shows that Republicans (20%) are twice as likely as independents (10%) and about three times as likely as Democrats (6%) to call it this, while more than one in four (27%) Americans who most trust Fox News say this is the most accurate way to refer to the virus. However, many experts warn that blaming China for the virus will lead to a disastrous path for U.S.-China relations. “In the end,” Nicholas says, “the election may hinge on people’s mood. If in the fall, voters are still despondent about the economy and worried for their safety, Trump’s decline may be irreversible. But there’s another scenario. What happens if scientists come up with effective therapeutic drugs, and the public-health threat subsides?” In that case, Trump and his allies believe they can beat former Vice President Joe Biden by appealing to the voters who don’t like him, but are so shaken by the pandemic that they have come around to Trump’s “economic-nationalist message that demonizes China.”

‘American Heretics: The Politics of the Gospel’ Free Online Screening

PRRI CEO and founder Robert P. Jones invites everyone to attend a free screening of the documentary “American Heretics: The Politics of the Gospel” on Saturday, April 25 at 4 p.m. ET. This critically acclaimed documentary film highlights the contentious and often misunderstood history of religion, race, and politics in America — grounded in the story of a church in Tulsa that challenged the perceived Christian orthodoxy in heartland America. Jones appears along with Rev. Dr. Robin Meyers, Rev. Bishop Carlton Pearson, Rev. Lori Walke, state Rep. Collin R. Walke, Rev. Dr. Marlin Lavanhar, Dr. Bernard Brandon Scott, and Nehemiah D. Frank. RSVP here to attend the live screening.
Earlier this week, Jones published an Op-Ed in Sojourners, which looks at the historic prevalence of racist and xenophobic tendencies during times of pandemic. Jones points to historical events such as an 1832 cholera epidemic in New York, as well as a wave of violence against African Americans during the flu outbreak of 1919. As unemployment levels rise, people die, and political divisions run rampant, Jones cautions that the next few weeks could be critical to avoid a repeat of history. “Americans are wholly unprepared — not just in public health or economic terms, but in terms of our culture and values — for what we will be facing in the next few weeks. Even if the more recently reduced projections hold, the coronavirus will claim the lives of more than 60,000 Americans. To put this in perspective, even these lower estimates would exceed the American lives lost in the Vietnam War. And if the death toll turns out to be more than 100,000 (where estimates had it just two weeks ago), it would roughly equal the lives lost in World War I,” Jones writes.