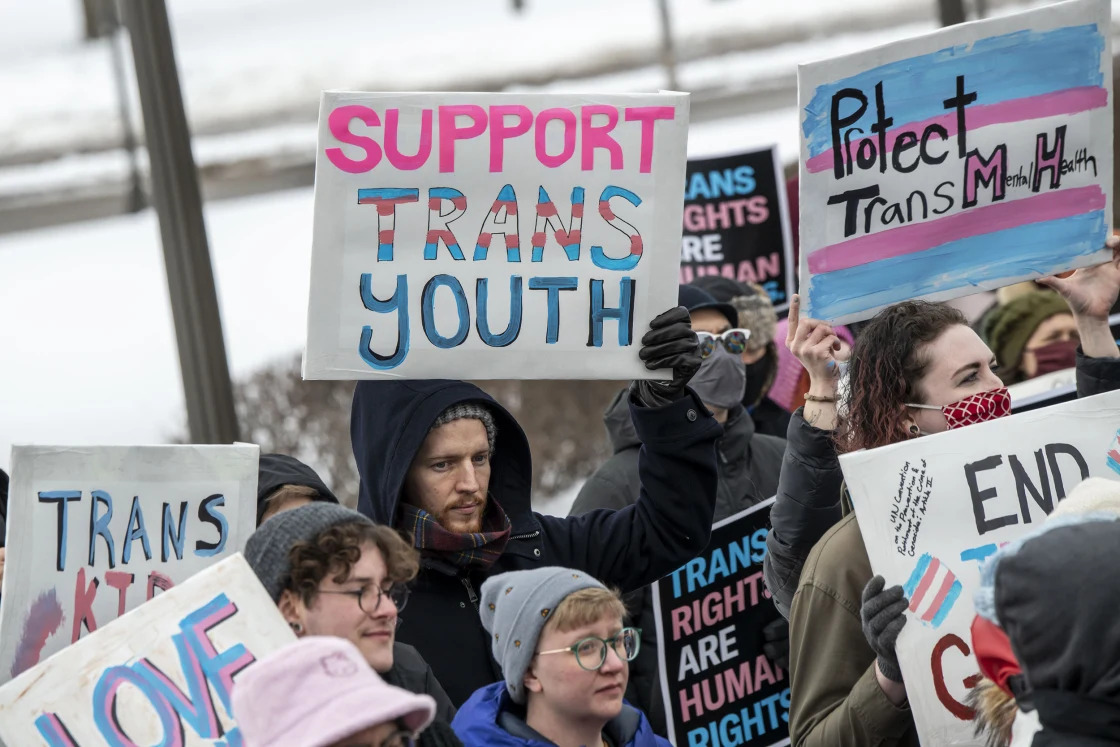 ‘Three Per Day:’ Anti-LGBTQ Legislation Continues in a Record-Setting Year

Matt Lavietes and Elliott Ramos report for NBC News on the staggering number and rate of anti-LGBTQ legislation across the states in 2022, with a record-setting 238 bills being proposed, or more than three per day so far this year. They write that roughly half of the legislation specifically targets transgender Americans. Since 2018, nearly 670 anti-LGBTQ bills have been filed, including at least one bill in the statehouses of nearly all 50 states, according to an NBC News analysis of data from the American Civil Liberties Union and LGBTQ advocacy group Freedom for All Americans. Ramos and Lavietes write that the measures would “restrict LGBTQ issues in school curriculums, permit religious exemptions to discriminate against LGBTQ people and limit trans people’s ability to play sports, use bathrooms that correspond with their gender identity and receive gender-affirming health care,” highlighting that proponents of these bills say they are about protecting children, parental rights, and/or religious freedom. Opponents and advocacy organizations argue that the slate of legislation is more about “scoring political points” with conservative voters than protecting family, children, or religion. The NBC News analysis found that roughly 65% or 154 bills filed as of March 15 are anti-trans bills.

While anti-LGBTQ legislation is hitting record highs, so is support among Americans for LGBTQ rights. Last week, PRRI’s annual American Values Atlas survey on LGBTQ rights found that nearly 8 in 10 Americans (79%) support laws that protect LGBTQ people from discrimination in jobs, housing and public accommodations. The same survey also found that nearly 70% of Americans support same-sex marriage, up from 54% in 2014.

Opinion: Can’t Win for Losing, Culture War and the GOP

Washington Post Plum Line columnist Paul Waldman recently wrote about America’s culture war and how an “aggressive” approach by Republicans to dominate social issues in the media, statehouses, and courtrooms seems to present a picture of those same values as driving public opinion. “In fact, the opposite is true,” Waldman writes. “The entire history of the culture war is one of conservative loss, retreat and retrenchment. That’s no less true today than it ever was, even as the political salience of the culture war waxes and wanes.” To make his point, Waldman notes PRRI’s recent American Values Atlas survey on LGBTQ rights, which found that 68% of Americans support same-sex marriage, 79% support legal protections against discrimination, and 66% oppose allowing service refusals targeting LGBTQ Americans on religious grounds. “In every case,” he says, “the liberal position has grown steadily more popular over time. The same is true among almost every political, religious, demographic and geographic subgroup. In the past few years, some have moved a tiny bit in the liberal direction while others have moved more substantially.”

Waldman theorizes that, although support for same-sex marriage has increased among Republicans (from 35% support in 2014 to 48% support in 2021), a successful political backlash can be created by persuading people “who haven’t changed their minds” to be angered by the changing world around them. As an example, he cites the year leading up to the 2004 general election when Massachusetts legalized same-sex marriage and then-San Francisco Mayor Gavin Newsom ordered the city to issue marriage licenses to gay couples. That fall, Republicans moved same-sex marriage to the top of their political agenda, and when voters went to the ballot box, 11 states passed referendums outlawing same-sex marriage which stood until the 2015 Obergefell v. Hodges decision from the Supreme Court. Waldman concludes by adding, “It’s the sense of being an outnumbered and oppressed minority that drives conservative anger, which can be mobilized into political action and translated to victory at the polls. That’s even more true in nonpresidential elections, when much of the electorate doesn’t bother to vote.

White Supremacy and the Christian Church

Roger McKinney for the Columbia (Missouri) Daily Tribune reports on appearances by PRRI founder and CEO Robert. P Jones last weekend in Columbia to speak about his book, “White Too Long: The Legacy of White Supremacy in Christianity.” The book features a “racism index,” based on an analysis of responses to 15 PRRI survey questions on racially sensitive topics such as Confederate monuments and police killings of African Americans.  The index, which controls for political partisanship, geography, and other issues, is scored from zero (the least racist views) to ten (the most racist views) and can be applied to the responses from members of various demographic groups. For example, Jones noted that white evangelical Protestants scored an average of eight out of ten, while white Catholics, who historically have been discriminated against, and white mainline Protestants scored nearly as high, with an average score of 7. The research also found that white Americans with no religious affiliation had an average score of 4. After being told of community opposition to the 2018 renaming of a Columbia elementary school that bore the name of Confederate Gen. Robert E. Lee, Jones said that people who view buildings, monuments, and flags as symbols of “Southern pride” instead of symbols of racism had higher racism index scores as well. PRRI found that more than four in ten (42%) Americans say that recent killings of Black men are isolated incidents, compared to a majority (56%) who say such killings are part of a broader pattern of how police treat Black Americans. The country is nearly equally divided on the question of whether the Confederate flag is a symbol of racism (49%) or a symbol of Southern pride (48%).

Noting that the Rev. Dr. Martin Luther King, Jr. famously proclaimed 11 a.m. on Sundays as “one of the most segregated hours” in Christian America, Jones said that, before the Civil War, many churches were integrated; after the Civil War, however, formerly enslaved people didn’t want to sit in church with their former owners who believed slavery was ordained by God and sanctioned by the Bible. The attitude among some white Christians today is one of, “We’re for equal opportunity, but we’re going to ignore our racist past,” Jones said. “It’s a kind of historical amnesia that benefits whites. They just pretend and wipe the slate clean.” For more information on Jones’ book, “White Too Long,” click here.