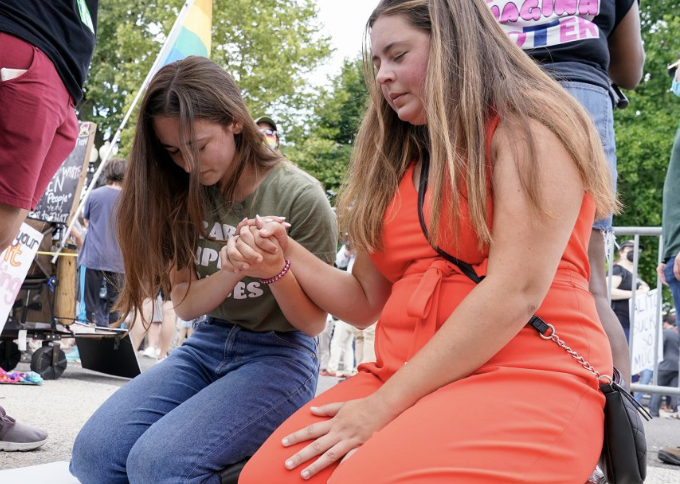 The Fall of Roe: Responses From Christian Leaders Across the Spectrum

Belinda Luscombe for TIME reports on the spectrum of responses from religious leaders as federal abortion rights come to an end. Luscombe leads with data from a recent PRRI spotlight analysis on abortion and personal identity, noting that 43% of Americans who “identify strongly” with their religious identity do not believe Roe v. Wade needed to be overturned. PRRI data from March 2022 found that 60% of mainline Protestants favor abortion being legal, but only 30% of white evangelical Protestants agree. Regardless, Luscombe notes that the “bulk of the work overturning Roe has been undertaken by Christian organizations,” though there is not unanimous consensus among Christians.

Jamie L. Manson, president of Catholics for Choice, said the “ruling gives right-wing leaders unfettered license to codify fringe religious beliefs into civil law.” In another example of religious incongruence, a synagogue in Palm Beach, Florida, filed a lawsuit this month against the state claiming that the “restrictive abortion regulations set to go into effect in July violate the State Constitution’s right to freedom of religion.” The Rev. Jennifer Butler, CEO of Faith in Public Life, highlighted the consequence of worsening racial and social inequalities: “Whatever our opinions on abortion, surely we can agree that jailing a woman or a health care provider for exercising their moral judgment in the moment is wrong. These punitive measures will be aimed disproportionately at Black, Brown, Native and Asian women, LGBTQ people, immigrants and low-income people—compounding the injustice.”

Uvalde Massacre Arms Manufacturer: ‘We Are in Business To Be a Supporter of the Gospel’

Historian Peter Manseau for The New York Times recently asked if America’s gun problem and the “good guy with a gun” solution to mass shootings has religious implications. The AR-15-style rifle used in Uvalde, Texas, last month was made by Daniel Defense, an American arms manufacturer that “presents its corporate identity in explicitly religious terms.” Manseau also writes that, at the time of the shooting, the company’s social media portrayed a photo of a toddler with a rifle in his lap and included the text of Proverbs 22:6: “Train up a child in the way he should go, and when he is old, he will not depart from it.” Weapons sold by Daniel Defense were used in both Uvalde and Las Vegas, resulting in the murder of 81 people. According to PRRI research, evangelicals have a higher rate of gun ownership than other religious groups.

Furthermore, Manseau notes that selling weapons is both patriotic and religious for Daniel Defense and many others in the business. “Despite being debunked by data showing that firearms are more likely to injure their owners or their owners’ families than safeguard them, the protection offered by good guys with guns has emerged as an article of faith,” Manseau writes. He concludes that mass shootings are, in a way, assaults on the idea of community itself.

Americans Are Even Less Likely to Reject Conspiracies in 2022