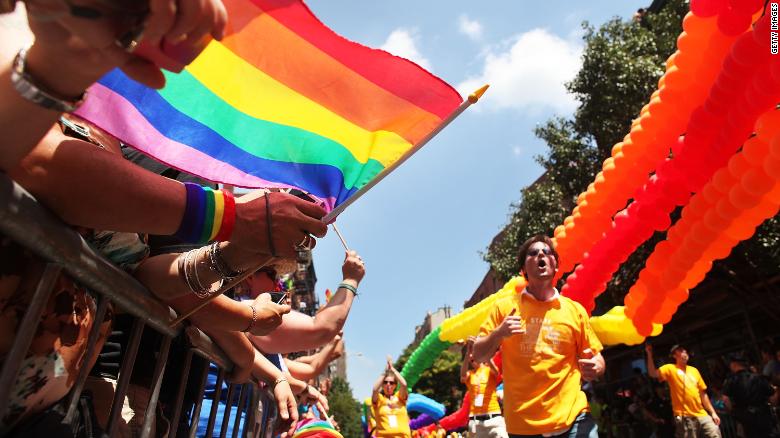 ‘The Era of the Rainbow Scare’ As LGBTQ Events Are Targeted

Opinion contributor Allison Hope for CNN writes about recent attacks on LGBTQ Pride celebrations across the country. Earlier this week in San Lorenzo, California, a group of men believed to be affiliated with the Proud Boys stormed a family drag queen story hour, showing white power hand signs and yelling hateful rhetoric, according to local reports. Bay Area drag queen Panda Dulce, who is Ivy League educated and has over a decade’s experience in social work, said that many of the children were terrified. At another Pride event in Coeur d’Alene, Idaho, last weekend, 31 members of the white nationalist Patriot Front, most of them traveling from out of state, were arrested for conspiracy to riot, according to NPR. Police found at least one smoke grenade and “paperwork that appeared to show a master plan to riot” in two locations. “We have entered the era of the Rainbow Scare,” Hope writes.

Recently, in Hope’s hometown in Connecticut, a blue state, “right-wing school board officials secretly stripped explicit mention of LGBTQ+ students from its Title IX policy.” Among the hundreds of bills in state legislatures, one of the most recent to advance not only bans trans girls from sports but also “require[s] a genital exam and verification by a doctor if a student’s sex were questioned.” PRRI found that nearly eight in ten Americans believe we should have laws that protect LGBTQ people from discrimination, including almost two-thirds of Republicans.

The Catholic Bishops Behind Gun Control

Thomas Reese for Religion News Service recently detailed the gun control debate within the Roman Catholic Church. Traditionally, Reese writes that most view abortion as “the only public policy concern of the church’s hierarchy.” Following the tragic massacre in Uvalde, Texas, Pope Francis stated, “It is time to say enough to the indiscriminate trafficking of arms.” In a 2015 address to a joint session of the U.S. Congress, he also remarked, “Why are deadly weapons being sold to those who plan to inflict untold suffering on individuals and society?”

One day after the shooting in Uvalde, Cardinal Blase Cupich of Chicago spoke out against the violence. In addition, Reese writes that “four of the most conservative prelates in the United States” issued a statement urging members of Congress to take action; the four pointed out that, as early as 1994, they have demanded action against gun violence. The bishops have called for “a total ban on assault weapons and limitations on civilian access to high-capacity weapons and ammunition magazines,” citing studies that limits on high-capacity magazines can reduce the number of people killed in mass shootings by as much as 38%, and reduce injuries by as much as 77%. The author cited PRRI data from 2012 that 62% of American Catholics support additional gun controls, though a subsequent PRRI survey in late 2018 showed 69% of American Catholics support stricter gun control laws.

Social networks that are entirely comprised of people from the same racial or ethnic background are less common today than they were when PRRI last researched the issue in 2013. That said, Americans’ core social networks tend to be dominated by people of the same race or ethnic background. Among white Americans, 90% of people comprising their social networks are also white, similar to 2013 (91%). Among Black Americans, 78% of people in their social networks are also Black, a notable decrease from 83% in 2013. “Those are some deeply reinforced bubbles full of people who are likely to hold similar views on the topics Washington is attempting to tackle—from gun control to taxes,” Chinni concludes.