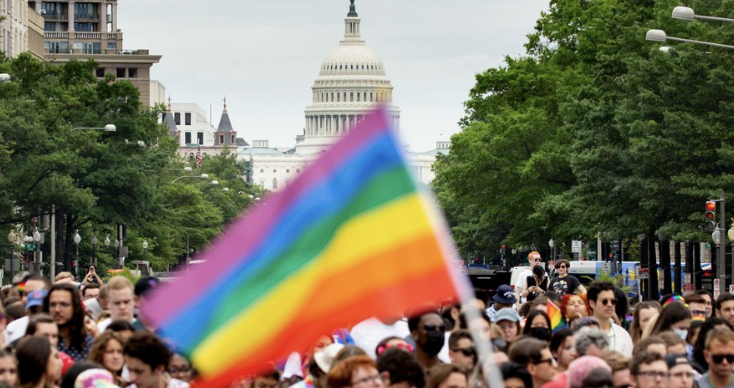 Stephanie Lai for The New York Times reports on the U.S. House of Representative’s passage of the Respect for Marriage Act yesterday, which would recognize same-sex marriages at the federal level. Notably, there was bipartisan support with 47 Republicans joining all House Democrats in backing the bill. Lai writes that the legislation is a direct response to Associate Justice Clarence Thomas’ concurring opinion overturning Roe, “in which he wrote that Obergefell and similar cases should be reconsidered.” Although there is not majority support among Republicans, she also acknowledges that yesterday’s vote points to “the beginnings of a shift in Congress” that mirrors public opinion and moves to “settle same-sex marriage as law.”

CNN reporters Clare Foran and Kristin Wilson also point out that it is unclear if the bill can pass the Senate, where at least 10 Republicans would need to join with Democrats to overcome the filibuster’s 60-vote threshold. Foran and Wison add that the bill also includes federal protections for interracial marriages. Additionally, the legislation would also protect same-sex marriages in the roughly 30 states that currently prohibit them if Obergefell were to be overturned. PRRI research has found that 48% of Republicans, 81% of Democrats, and 73% of independents support the right to same-sex marriage.

Arizona As ‘Ground Zero’ in Fight for Abortion Rights

Suzanne Gamboa for NBC News reports on Latino Democrats who have “insisted that the fight for abortion rights will help them rally Hispanic and other voters,” while dubbing Arizona as “ground zero” for reproductive rights. As Democrats make a sustained effort to mobilize voters on abortion rights, Gamboa highlights that Latino mobilization was crucial in President Joe Biden’s Arizona win — the first for a Democrat since Bill Clinton in 1996 — and that the state now has two Democratic senators after voting Republicans into office for decades. Republicans, however, expanded Latino support in 2020 “in part by campaigning on jobs and the economy,” and they are attempting to continue to grow that support.

Gamboa adds that the fight for abortion rights in the Grand Canyon State is happening simultaneously with intense inflation; the issues of reproductive rights are tied to the cost of living, and Democratic candidates are capitalizing on this as a result. “Reproductive rights, it absolutely impacts communities of color more,” state Sen. Martín Quezada said. “The reason why … is because of the economic impact it has on them, because of the ability to then get jobs and to determine your future.” PRRI research found earlier this month that 72% of Hispanic Catholics are opposed to the Supreme Court’s decision to overturn Roe.

‘Not Just A Matter of Abortion:’ Black Voters and Reproductive Rights

Zolan Kanno-Youngs for The New York Times examines the nuance of Black voters’ opinion on abortion: “While Black voters remain overwhelmingly allied with the Democratic Party, some, especially older churchgoers, have a conservative streak when it comes to social issues like abortion.” The Rev. Najuma Smith-Pollard, a pastor at a Black church in Los Angeles, underscored the importance of framing the response as “not just a matter of abortion, but rather as part of a broader movement to restrict individual rights.” Polling has demonstrated that Black Americans are split on the morality of abortion, which Kanno-Youngs writes is a reflection of the enduring influence of the Black church.

According to a PRRI survey fielded immediately after the decision to overturn Roe, 65% of Americans said abortion should be legal in most or all cases. The same poll found that about 75% of Black Americans — compared with 88% of all Democrats — are now supportive of laws protecting “most or all” cases of abortion. This figure can be attributed to younger Black Americans being more likely than older Black voters to be fully supportive of abortion rights, experts say.