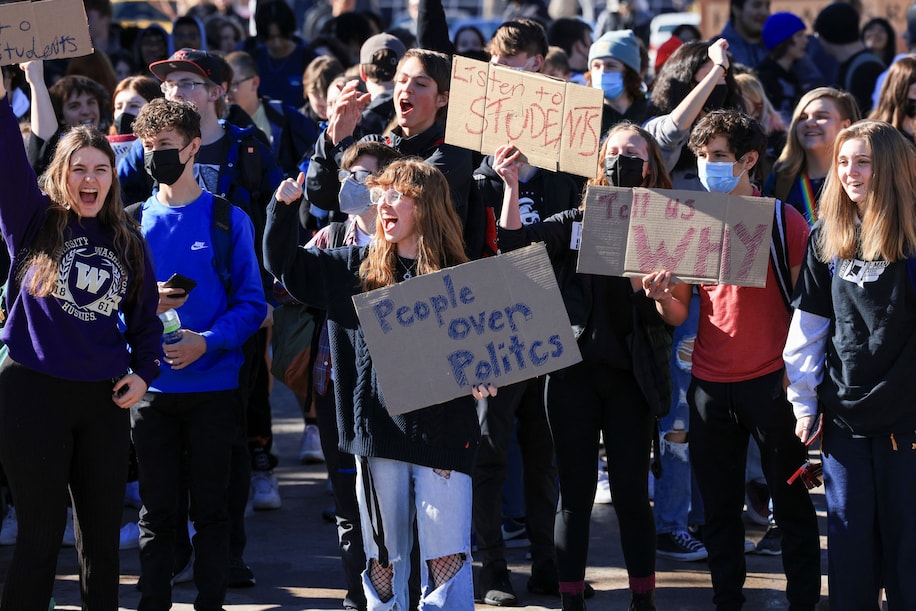 Rubin: Why Republicans Are Trying To Turn America Red

Jennifer Rubin for The Washington Post reports on proposed Republican legislation cropping up around the country in recent months surrounding hot-button topics such as critical race theory, COVID-19 vaccinations, and LGBTQ rights. One such bill aims to remove any vaccine requirements for schools in Georgia, wherein the bill’s sponsor said it is “unclear whether vaccines work.” In Florida, a bill was proposed that forbids the “distortion of historical events” or the teaching of CRT—a legal analysis framework that evaluates how racism is embedded in American society and its legal systems. Rubin highlights PRRI founder and CEO Robert P. Jones’ explanation of the Florida bill from “The Sacred Work of White Discomfort,” his recent #WhiteTooLong Substack post. “This provision effectively gives any single white person veto power over the content of history curriculum in schools or trainings in the workplace,” Jones writes.

Also in Florida, proposed legislation dubbed by critics as the “Don’t Say Gay” bill forbids public school districts from “encouraging classroom discussion about sexual orientation or gender identity” if it is not “age-appropriate or developmentally appropriate for students.” In Texas, according to ABC News, lessons on the civil rights movement, white supremacy, the women’s suffrage movement, and the Rev. Dr. Martin Luther King Jr. “may soon be cut,” prohibiting instruction that make students “feel discomfort, guilt, [or] anguish about privilege or systemic racism.” Rubin summarizes: “A common theme among these measures: protecting Whites—not Blacks, Hispanics or Native Americans, the groups that have actually suffered from racism and repression—from feeling ‘bad’ about historical facts. …Minorities upset about the miseducation of youth simply have to suck it up.”

The New York Times’ Reid J. Epstein and Shane Goldmacher describe the “destabilizing force” that former President Donald Trump’s claims of election fraud have had on Republicans. The current chasm within the party was put on display as the Republican National Committee voted to censure Representatives Liz Cheney and Adam Kinzinger when RNC members had to choose between upholding the actions taken by those who participated in the U.S. Capitol insurrection or denouncing it. Epstein and Goldmacher stated that this “episode was only a preview” of the coming turmoil, noting that upcoming primary contests will intensify questions of election fraud. The 2020 election continuing to play out and influence elections is an “alarming prospect” for some Republicans concerned with the party’s foundation; the rest worry about the more short-term consequences of the focus on the events of January 6 versus Biden’s low approval ratings ahead of the midterms. The article cites PRRI research, which found that beliefs that the 2020 election was stolen were most common among those who consume conservative media: 82% of Fox News viewers and 97% of those who consume far-right channels such as OAN and Newsmax believe the election was stolen. Additional PRRI research on the subject found that among those who think the 2020 election was stolen from Trump, 39% agree that “true American patriots” might have to resort to violence in order to “save our country,” compared to only 10% among those who do not think the election was stolen.

Ronald Brownstein for The Atlantic explores the friction between the 6–3 majority-conservative U.S. Supreme Court and a “demographically and culturally changing America.” Brownstein writes about the break-neck pace in which the Supreme Court has moved to impose the GOP’s preference on issues such as abortion, voting rights, and affirmative action, which are more in line with the attitudes of majority white, majority Christian nation. He cites PRRI’s founder and CEO, Robert P. Jones, who predicts that the GOP’s majority will attempt to travel back in time to a “conservative Christian white hierarchy.” PRRI data found that white Christians now make up only 44% of the nation, declining by one-third over the last few decades. However, two-thirds of the Republican party is Christian, and in 25 states, white Christians make up 49% of the population or more. Brownstein points out that of those 25 states, Trump won 18 of them; in addition, 37 out of 50 states elected Republican senators.

PRRI polling from the 2021 American Values Survey found multiple contradictions between the majority of Americans’ opinions and the GOP: two-thirds of Republicans say abortion should be illegal in all or most circumstances, while 70% of all other Americans say it should remain legal in all or most cases; 55% majority of Republicans say small-business owners should be permitted to deny service to same-sex couples on religious grounds, while almost three-fourths of Americans disagree. In addition, about three-fourths of Republicans say discrimination against white people is now as big a problem as bias against Black people, while more than two-thirds of everyone else rejects that idea. “…On these fronts and others, the GOP-appointed Court majority appears ready to tilt the law sharply toward the coalition of restoration’s preferences,” Brownstein concludes.