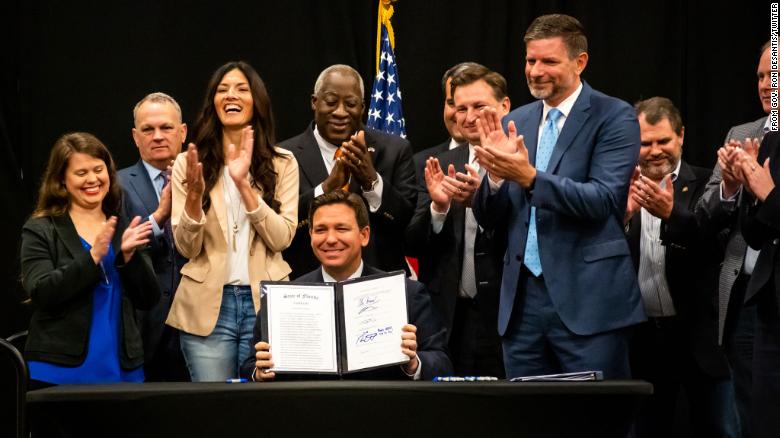 ‘Red-State Education Wars:’ 729 Efforts To Ban Books at School or Public Libraries in 2021

Ron Brownstein for CNN Politics reports that following Florida Gov. Ron Desantis’ signing the Parental Rights in Education law, dubbed by critics as the “Don’t Say Gay” bill, legislation is now moving to limit what is available to students in the library. “Republican-controlled states including Florida, Georgia, Tennessee and Texas are now pushing statewide rules that make it easier for critics to remove books they dislike from school libraries in every community,” writes Brownstein. Red states are also “seriously debating” proposals that would allow for the removal of books from public libraries. Deborah Caldwell-Stone, director of the Office for Intellectual Freedom at the American Library Association, stated: “The primary target still is school libraries and school librarians, K-12 teachers, but we are seeing this bleed over to public libraries.” The recent swell of conservative legislation is seen by critics as a “powerful through line” connecting the attempt to ban books, “censor classroom instruction,” limit voting access and harshen the legal penalties for public protesting, he writes.

The American Library Association reported there were 729 efforts to ban books at school or public libraries in 2021, the highest number since the organization started tracking the data in 2000. Brownstein notes that confrontations over classroom and library content “underscore the cultural chasm between increasingly diverse younger generations and the socially conservative, predominantly White and Christian, Republican coalition that holds power in the red states.” He cites federal statistics indicating that nearly 55% of K-12 public school students in the nation are children of color; data from Gallup indicating 1 in 5 members of Generation Z (21%) and 1 in 10 millennials (10.5%) identify as LGBTQ, and research from PRRI’s 2020 Census of American Religion that more than a third of young adults identify as secular, without affiliation with an organized religion.

Brooke Migdon for The Hill reports on a bill passed by the South Carolina House of Representatives last week that would allow medical practitioners and health care institutions in the state to “deny care based on their personal beliefs.” The bill would also apply to insurance companies, which may be permitted to deny payment for care. Known as the “Medical Ethics and Diversity Act,” some predict the bill will disproportionately affect the LGBTQ community, women, and people of color. Migdon also reports that dozens of state residents in February testified against the bill, calling it vague and overbroad. Sarah Warbelow, Human Rights Campaign legal director, stated: “Religious freedom is a fundamental American value that is entirely compatible with providing quality, non-discriminatory [health care]. It is not a license to deprive others of their rights simply because of personal beliefs.” The bill also would allow receptionists to turn away patients while permitting medical researchers to “refuse to publish the results of a state-funded study because the scientific evidence is inconsistent with their personal beliefs.”  A counterpart bill in the South Carolina Senate is currently in committee.

On Saturday, April 9, the NETWORK Lobby for Catholic Social Justice will host a virtual conference on the topic of white supremacy and American Christianity.  A 90-minute keynote discussion at the top of the conference program will feature a conversation with PRRI founder and CEO Robert P. Jones, Fordham University professor and author of “Racial Justice and the Catholic Church” the Rev. Bryan Massingale, and Georgetown University history and African American studies professor Marcia Chatelain, winner of the 2021 Pulitzer Prize in History for her book “Franchise: The Golden Arches in Black America” and lead organizer of the #FergusonSyllabus, a crowdsourced educational resource about racism and police. Registration for the event is available here; the organizers suggest a $5 donation to support the conference.