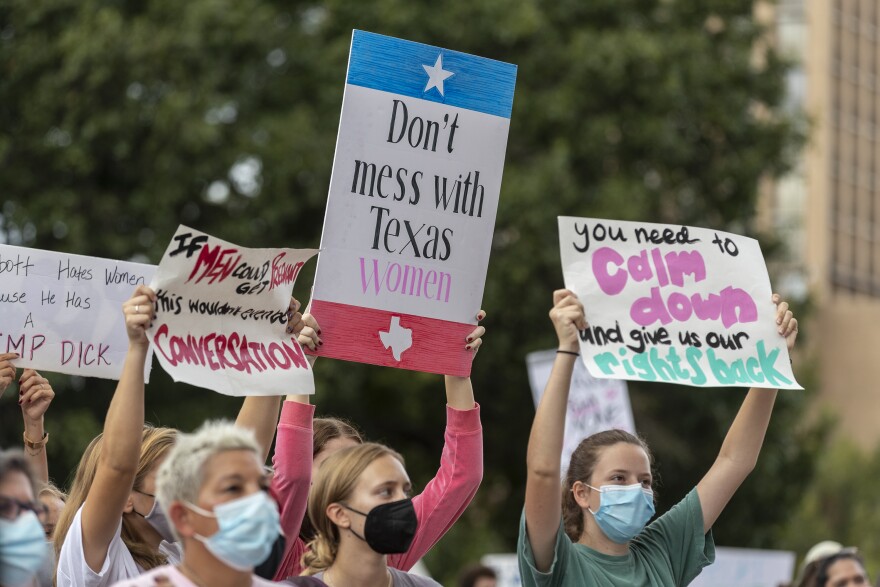 Pro-Choice Advocates in Texas Believe They Have New Avenue To Block Heartbeat Law:

Caroline Kitchener for The Washington Post reports on developments regarding the Texas Heartbeat Act, which employs a “highly controversial legal tactic: empowering private citizens to sue anyone who helps facilitate an abortion after the legal limit.” The law, which went into effect last September, prohibits abortions after embryonic or fetal cardiac activity is detected, typically around six weeks of pregnancy. When a federal judge issued an injunction temporarily blocking enforcement of the law in October, the Lilith Fund and the Texas Equal Access Fund helped pay for abortions while the injunction was in effect; this led a group of anti-abortion lawyers to issue lawsuit threats via Twitter to anyone who helped the two groups fund abortions. Kitchener explains that abortion-rights groups think the threats may have opened a new legal path to stopping the Heartbeat Act given numerous unsuccessful attempts to sue Texas law clerks, judges, and medical board officials.

Now, the same pro-choice funds “argued in several lawsuits filed last week that the groups targeting them have identified themselves as the ones enforcing the law—and, therefore, the ones for abortion rights advocates to hold to account in federal court,” Kitchener writes. Despite three opportunities, the U.S. Supreme Court has not blocked the novel legal approach behind the Heartbeat Act where private individuals, rather than state officials, enforce the law via civil suits, so the most recent legal action by the two abortion funds “[opens] another potential pathway to the high court,” thus creating “an opportunity for the justices to rule on the merits of the law itself, rather than issues about who has legal grounds to sue.” PRRI found in 2019 that a majority (54% of Americans) believe that abortion should be legal in all or most cases, while four in ten believe that abortion should be illegal in most or all cases. These numbers are essentially unchanged since 2014. In Texas, the same PRRI research found that 48% of state residents believe that abortion should be legal in all or most cases, while 45% believe it should be illegal in all or most cases.

Alex Samuels and Neil Lewis Jr. for FiveThirtyEight analyze PRRI data on the perception of discrimination among both Black and white Americans since Barack Obama was president. The 2008 presidential election alone saw a tremendous display of bigotry, including a rise of hate crimes following Obama’s win, with some white voters refusing to vote for Obama simply because of his skin color. The authors posit that the 2008 presidential campaign spurred white voters’ resentment and a subsequent backlash that, in part, inspired the election of former President Donald Trump eight years later. Trump then created “fertile ground” for white supremacists and a growing sense of white victimhood. “During a recent political event, [Trump] went so far as to falsely claim that white people were currently being discriminated against and sent to the ‘back of the line’ when it came to receiving COVID-19 vaccines and treatment,” a statement that has been proven to be the opposite of what has actually occurred. Additionally, there is evidence in an array of areas where Black Americans and minority groups continue to feel the impacts of systemic racism, including the “racial wealth gap, mortgage denial rates, COVID-19 vaccination, and illness rates, police violence rates.”

Writing for Arizona State University’s Zócalo Public Square, Ali Noorani, president and CEO of the National Immigration Forum and an ASU Social Transformation Lab fellow, argues that the nation needs a new approach to immigration that balances both security and compassion. “Borders are meant to create order and security. But around the world, authoritarians seeking to enhance their power are pushing dangerous border narratives to sow chaos and exploit insecurity,” Noorani writes, noting that a more inclusive immigration policy would benefit us all, increasing rather than decreasing security. That said, when lawmakers in a democracy speak of reform, they often note the benefits of immigrants and immigration, an approach that does not “always align with people’s lived experiences,” leading instead to skepticism that fits into a large segment of the population’s “fundamental mistrust of government.”  For example, as the Biden administration last year outlined policies to address migration from Central America, they used themes of “doing the right thing, treating migrants the right way,” but offered few stories about how new policies would actually benefit the American public. Noorani argues that this created a vacuum, exploited by immigration opponents in order “to plant seeds of doubt about the Biden administration’s approach.” As an example, he notes that Fox News political commentator Tucker Carlson “claimed Biden’s policy was designed to ‘change the racial mix of the country;’ then he invoked ‘the great replacement,’ a white nationalist, anti-immigrant conspiracy theory.”

Noorani is the author of the forthcoming “Crossing Borders: The Reconciliation of a Nation of Immigrants,” which examines “the complexities of migration through the stories of families fleeing violence and poverty, the government and non-governmental organizations helping or hindering their progress, and the American communities receiving them.” Available at the end of March, “Crossing Borders” can be pre-ordered here.