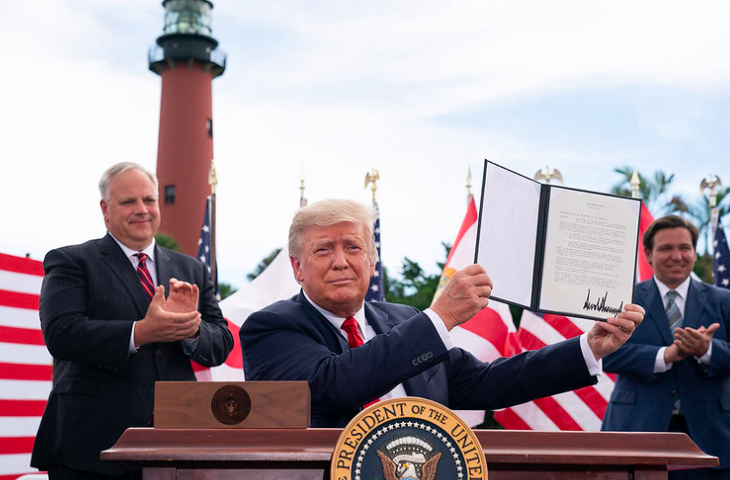 Pat Robertson to Trump: It’s Over

PRRI’s latest data shows that white evangelical Protestants continue to be most likely to hold favorable views of President Donald Trump (59%). A slight majority of white Catholics (51%), as well as 34% of white mainline Protestants, view Trump favorably. On Monday, Pat Robertson, a longtime televangelist and fierce Trump supporter, advised the president to accept that President-elect Joe Biden would soon reside in the White House. “You know, with all his talent and the ability to be able to raise money and grow large crowds, the president still lives in an alternate reality,” Robertson said. “He really does. People say, ‘Well, he lies about this, that, and the other.’ But no, he isn’t lying; to him, that’s the truth.” “It’s a mixed bag,” Robertson conceded, “and I think it would be well to say, ‘You’ve had your day and it’s time to move on.’”

Please Consider a Donation to PRRI in 2020

As the country continues to cope with the challenges of the pandemic and we transition to a new presidential administration, PRRI will continue to provide insights about how religion, culture, and politics shape how Americans think about the future of the country. As 2020 winds down, there is still time to donate to PRRI. We hope that you will consider a tax-deductible donation to help us provide the type of analysis and data that you have come to expect for many years to come. Please donate here.

Trump Goes After Mitch McConnell in Email Sent by Aide

One in five Americans (21%) view Republican Senate Majority Leader Mitch McConnell (R-KY) favorably, while 56% hold unfavorable views of him. He is viewed favorably by less than half of Republicans (46%). Notably, among all Americans, 23%, including 22% of Republicans, indicated they had not heard of McConnell. This week, House Republicans received an email from Molly A. Michael, special assistant to the president and Oval Office operations coordinator, that could indicate a final split between McConnell and President Trump. “A graphic was attached to the email, obtained by NBC News, and it showed a timeline of McConnell’s polling numbers since May against his 2020 Democratic challenger, Amy McGrath. It suggested that McConnell was re-elected only because of Trump. It said: ‘Sadly, Mitch forgot. He was the first one off the ship!’” reports NBC News. In recent days, McConnell has publicly admitted that Joe Biden would be the next President of the United States.

Stimulus Money Could Be in Some Bank Accounts Next Week

According to Treasury Secretary Steven Mnuchin, some Americans could begin seeing aid money in their bank accounts next week. Mnuchin’s comments came hours before a COVID-19 relief bill was approved by Congress. Many Americans and lawmakers have expressed that more assistance is still needed. “Our economy is in a deep, deep, deep hole,” Sen. Chuck Schumer (D-NY) said on Sunday. “A lot more needs to be done.” PRRI data shows that as of late September, nearly four in ten Americans (38%) report that they or someone in their household has had their hours or pay cut as a result of the coronavirus pandemic. More than one in five (22%) say they or someone in their household have lost a job due to the pandemic.
Tweet
Tweet
Tweet