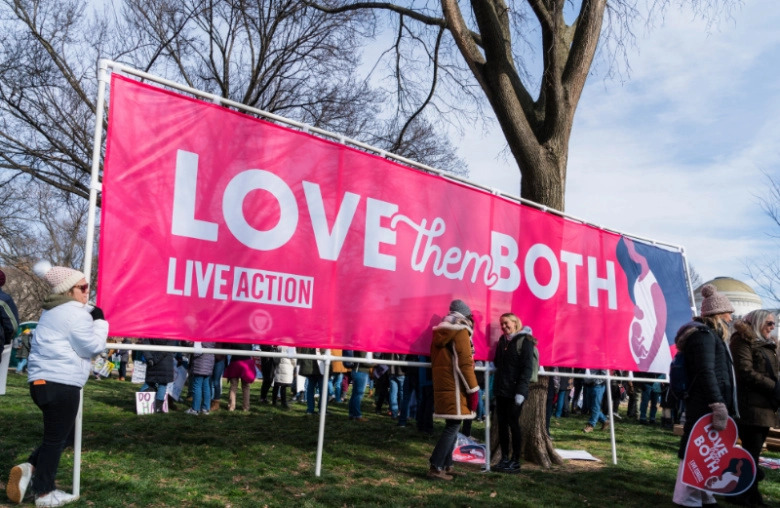 Opinion: Reconciling the Meaning of Life in ‘Pro-Life’

Last Thursday, PRRI issued a new survey report based on interviews that took place shortly after the U.S. Supreme Court overturned Roe v. Wade, its landmark 1973 ruling on abortion. This week, Beth Allison Barr cited the data in an opinion

essay for Religion & Politics about how views in the pro-life movement are in contradiction with supporting the lives of mothers who will be at-risk.

She writes, “It is hard to comprehend that if my skin had been a different color, my chances of surviving would have decreased significantly. Regardless of income and education levels, Black women are three to four times more likely than white women to die due to pregnancy complications.” Additionally, in 2018, only 30% of Black mothers were both eligible and able to afford unpaid work leave.

Barr emphasizes that Black Christians, who are just as religiously devout as white evangelicals, are less likely to identify as pro-life. Research from PRRI found that 75% of Black Protestants support abortion being legal in most or all cases in contrast to only 25% of white evangelical Protestants. The Rev. Cheryl Sanders, senior pastor of Third Street Church of God in Washington, DC, said she does not want to align with the political pro-life movement, stating that it is “fraught with problematic racial views and exceptions and blind spots.” Barr also cites that 67% of women in the United States support legal abortion in most or all cases. She concludes: “Instead of seeing this majority of women as the liberal enemy, shouldn’t the pro-life movement be asking what they have done to alienate them?”

Christian Nationalism on the Rise

Elizabeth Dias for The New York Times reports on the dynamics of Christian nationalism in American politics today, demonstrated by a recent statement from Pennsylvania gubernatorial candidate Doug Mastriano: that separation of church and state is a “myth.” Mastriano recently spoke at a far-right conference where he “wove a story about what he saw as the true Christian identity of the nation.” Dias explains that the rapid advance of cultural priorities held by many conservative Christians is now clearly on display, including U.S. Supreme Court decisions on abortion, school prayer, and funding for religious education, as well as state laws targeting classroom conversations on LGBTQ issues and gender-affirming healthcare for transgender children.

Dias also notes the history of Christian nationalism in America, including a 1948 presidential nominee from the Christian Nationalist Party, which “adopted an antisemitic, anti-Black platform that called for the deportation of people with whom it disagreed.” Former President Donald Trump’s rise to power was largely fueled by his offer to “preserve the influence of white evangelicals and their values just as many feared that the world as they knew it was rapidly disappearing,” she writes. A PRRI survey recently found that about 60% of white evangelical Protestants believe that the election was stolen from Mr. Trump, and also that white evangelicals are also the most likely religious group to be believers in QAnon.

Children Caught in the Political Tangle of a Polarized America

New York Times opinion contributor Margaret Renkl writes on the spate of laws targeting transgender students and athletes across the country. She leads with the story of two families who were involved in a federal civil rights lawsuit challenging Tennessee legislation barring transgender students from using bathrooms that align with their gender identities; the families have since left the state, resulting in a district judge dismissing the suit. Renkl writes that this serves as “yet another stark reminder that fighting institutional prejudice always comes at a cost,” with new laws being put in place across many red states.

Renkl goes on to address the post-Roe fallout in some Republican-led states: physicians afraid to treat life-threatening conditions, women forced to carry babies that will not survive outside the womb, and abortion bans with no exceptions for rape or incest, even when the victim is a young child. She also notes that we “now have a country in which the citizens of red states don’t have the same rights and civil liberties as the citizens of blue states.” A PRRI survey found that nearly 79% of Americans — including 65% of Republicans — support laws that protect LGBTQ people from discrimination.