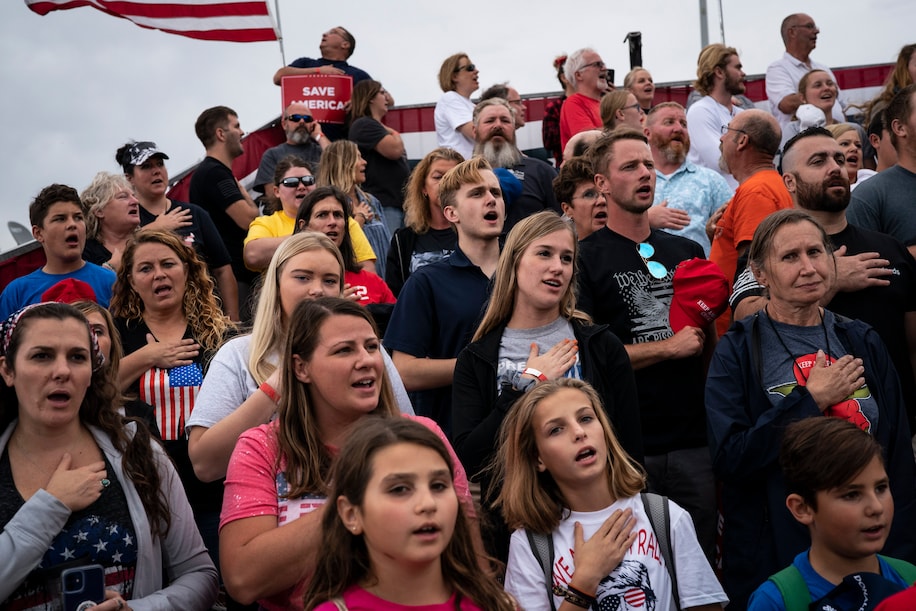 Opinion columnists Paul Waldman and Greg Sargent of The Washington Post address the “great replacement” conspiracy theory and its correlation to the mass shootings the nation has seen in the last two weeks. The idea migrated from the far-right fringe into the outer reaches of the Republican Party, echoing the origins of QAnon misinformation. The theory suggests that, “liberal elites are scheming to ‘replace’ native-born Americans with nonwhite immigrants.” Waldman and Sargent point to Stephen K. Bannon and Stephen Miller, former President Donald Trump’s advisors, who started referencing “The Camp of the Saints,” a novel from 1973 with racist ideologies where “dark-skinned immigrants destroy France.” Similar rhetoric then found its way into Trump’s speeches, but the authors note that the core of the messaging wasn’t widely understood at the time.

Experts in great replacement ideology highlight that proponents of the theory want “listeners to grow more comfortable with sugar-coated versions of these ideas,” and eventually “acclimate to their more virulent ideological core.” The writers recognize PRRI’s research on the topic as unique in its effort to get at the underlying issue through survey questions like, “Immigrants are invading our country and replacing our cultural and ethnic background.” Director of Research Natalie Jackson said the wording is designed to understand the threat to white Americans. “White people, and very specifically white Christians, have always held the power in the United States.” Broadly framed, the issue is about the “fear of losing power to people of color coming in from other countries,” she said. “The core of replacement theory is about whiteness.”

‘Great Replacement’ Is No Longer a Fringe Theory

A new PRRI spotlight details how belief in great replacement theory is not just a fringe conspiracy belief. After a white supremacist terrorist shot 13 people, killing 10, this month in Buffalo, New York, PRRI analyzed how many people support this ideology. Data from August 2021 found that Americans who most trust conservative media outlets like One America News Network or Newsmax (80%) or Fox News (67%) are the most likely groups to agree with the statement that, “Immigrants are invading our country and replacing our cultural and ethnic background.” Additionally, 65% of QAnon believers and 60% of Republicans agree with the replacement theory statement, compared to just one in ten Democrats (11%) and one in four independents (26%). Among religious groups, half of white evangelical Protestants (50%) agree with these replacement fears. Support for Christian nationalism is strongly correlated with a belief in replacement theory.

In light of the tragic shooting, several news stories have emphasized the involvement of prominent Republican figures in promoting replacement theory. This includes support from members of Congress such as Rep. Matt Gaetz and Rep. Elise Stefanik, the third-ranking Republican in the House, as noted by Kaleigh Rogers of FiveThirtyEight. Todd C. Frankel and Dylan Freedman of The Washington Post highlight how 22 large U.S. companies with racial justice pledges have donated to Stefanik, even after making “vocal pledges to use their resources to combat racism.” These companies are simultaneously funding a politician with messaging consistent with the great replacement theory, demonstrating the “thorny contradictions” within corporate America, Frankel and Freedman write. Stefanik’s political ads from last September accused Democrats of wanting a “PERMANENT ELECTION INSURRECTION,” as well as an immigration amnesty plan that “will overthrow our current electorate and create a permanent liberal majority in Washington.”

PRRI Public Fellow Tarah Williams and Paul Testa write for The Washington Post’s Monkey Cage blog about their research that suggests, “men can help build support for women’s rights, particularly by persuading the hard-to-reach.” Although most people oppose overturning Roe, many Republican-controlled state legislatures are passing restrictions on abortion, while Republican members of Congress support a national abortion ban. The writers examine how U.S. reproductive-rights activists can galvanize support and change the minds of those who are adamantly pro-life, even in situations where the mother may die or in cases of rape or incest. Even though abortion is generally considered a women’s issue, men are close behind women in their support. Williams and Testa’s research, coauthored with Kylee Britzman and Matthew Hibbing, finds that these similar levels of support mean that pro-choice activists could bring in more supporters. PRRI research finds that 64% of women and 59% of men oppose overturning Roe v. Wade, a 5-point difference.

The authors designed a survey where people were given different questions about the importance of #MeToo and the need for gender equality. Two-thirds of respondents (67%) chose to listen to a woman delivering a message about #MeToo, while roughly a third declined (33%). Among the findings, a statistically significant number of men who chose not to hear about #MeToo from a woman were willing to read the same message from a man. Williams and Testa conclude that some men could only hear a message about women’s rights if delivered by a man. “If more men speak up for women’s rights, they can help overcome some of the backlash against women who do.”