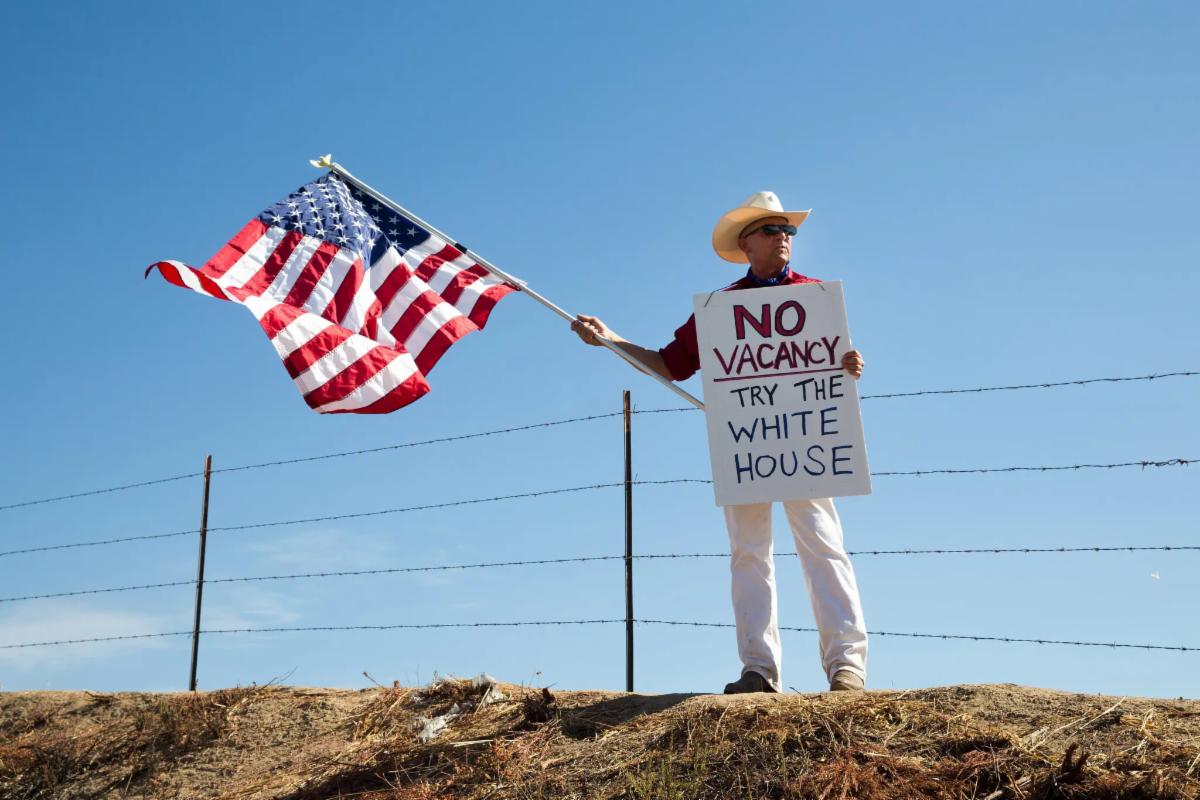 Opinion: Breaking Down the ‘MAGA Formula’

Opinion columnist Thomas B. Edsall for The New York Times employs a collection of scholars to discuss how and what has come to make the “MAGA formula,” examining “Christian nationalism, white replacement theory and conspiratorial zeal—from QAnon to the ‘stolen’ 2020 election.” According to some scholars, Edsall writes, there are two versions of Christian nationalism, one more threatening to the social order than the other. Ruth Braunstein, former PRRI Public Fellow and author of the 2021 paper “The ‘Right’ History: Religion, Race, and Nostalgic Stories of Christian America,” wrote that white Christian nationalism “explicitly fuses whiteness, Christianity and Americanness,” versus colorblind Judeo-Christian nationalism, which “either ignores race or uses colorblind language to describe ideal Americanness.” PRRI provided Edsall with research finding that white Americans who believe that, “Immigrants are invading our country and replacing our cultural and ethnic values,” are more than five times as likely as those who disagree to also believe that, “True American patriots may have to resort to violence in order to save our country” (45% vs. 8%).

PRRI CEO and founder Robert P. Jones attributes the cause to “twin shocks to the system,” meaning “the election and re-election of our first Black president and the sea change of no longer being a majority-white Christian nation” contributed to “set[ting] the stage for Trump and the emergence of full-throated white Christian nationalism.” Andrew Whitehead, a sociologist at Indiana University, writes, “We find in study after study that when white Americans strongly embrace Christian nationalism, …they are more likely to (1) fear a time in the future where whites are no longer the majority, (2) oppose interracial marriage, (3) oppose transracial adoption, (4) assume Black Americans are biologically inferior, (5) believe police violence toward Black Americans is warranted and (6) show more tolerance for ‘old-fashioned racists’ compared to other stigmatized groups.”

‘White Fear and Anger’ and the Great Replacement Theory

Adam Russell Taylor writes for Sojourners on the latest mass shootings, including an episode at a Taiwanese American church in Laguna Woods, California, on May 15 and the ‘vicious’ murder of ten people in Buffalo, New York, the day before. He examines details of the Buffalo killings, noting that the teenage shooter, who modified his gun so it could hold more ammunition, also considered attacking both a Black church and a predominantly Black elementary school in the area. The tragic murders were said to be carried out due to the belief in “great replacement theory,” which Taylor defines as “white fear and anger about the growing diversity in many Western nations in ways that have contributed to horrific violence against the Black, Asian, Latino and Jewish communities.” Startlingly, he notes that Americans hold approximately half of all civilian firearms worldwide, although the country comprises only 4% of the world’s population.

Taylor urges that this massacre “must be a resounding wake-up call about the real and present danger that white supremacist domestic terrorism poses to our nation.” He explains that great replacement theory is not only held by the extremist fringe. PRRI research found that 50% of white evangelical Protestants, 60% of Republicans, and 11% of Democrats agree with the statement that, “Immigrants are invading our country and replacing our cultural and ethnic background.” He writes that many high profile politicians openly espouse the idea, including Christian leaders such as Mark Driscoll who argued that the Black Lives Matter movement was “dismantling the nuclear family.” Taylor also highlights that former President Donald Trump’s campaign slogan, “Make America Great Again,” was a “dog whistle to stoke white fears and grievance about the nation’s changing demographics,” which ignores the fact that this alleged greatness is not applicable to how our nation treats Native Americans, African Americans, Latino Americans, and Asian Americans.

Kate Sosin for The 19th takes an in-depth look at the evolution of evangelical voters in relation to the GOP. Randall Balmer, a Dartmouth professor and author of “Bad Faith: Race and the Rise of the Religious Right,” provides a historical framing, noting the “rise of the evangelical voting bloc from nonexistent in the 1960s to the single most important interest group for any Republican candidate in the 1980s.” Sosin highlights that former President Donald Trump initially campaigned with a welcoming attitude towards LGBTQ people, “only to later adopt the ideology of the far-right evangelical base he needed to win.” Sosin also points to Paul Weyrich, who helped to organize politically the religious right, “testing out issues that would drive other evangelicals to the polls in the 1970s.” Noting Weyrich’s success through issues like abortion and LGBTQ rights, Sosin summarizes, “This idealized rewind to 1950s America would systematically challenge the basic rights gained by Black Americans, LGBTQ+ people and those with disabilities.”

PRRI research found that white evangelical Protestants were the only major religious group as of 2020 that opposed same-sex marriage—just 34% of those surveyed support marriage equality. Regardless of polls, in the last two years, Sosin notes that 15 states have passed laws barring transgender kids from playing sports consistent with their gender identity, three have approved laws preventing trans kids from accessing care for gender dysphoria recommended by major medical associations, and two have outlawed mention of LGBTQ history or people for young children in public schools. Finally, she links anti-trans states with those that are anti-abortion: “Maps of states that have passed laws that would ban abortion if the Supreme Court struck down Roe v. Wade almost mirror those that have passed anti-trans bans. Eleven of the 15 states with a sports participation ban for trans youth have also moved to curtail abortion rights.”