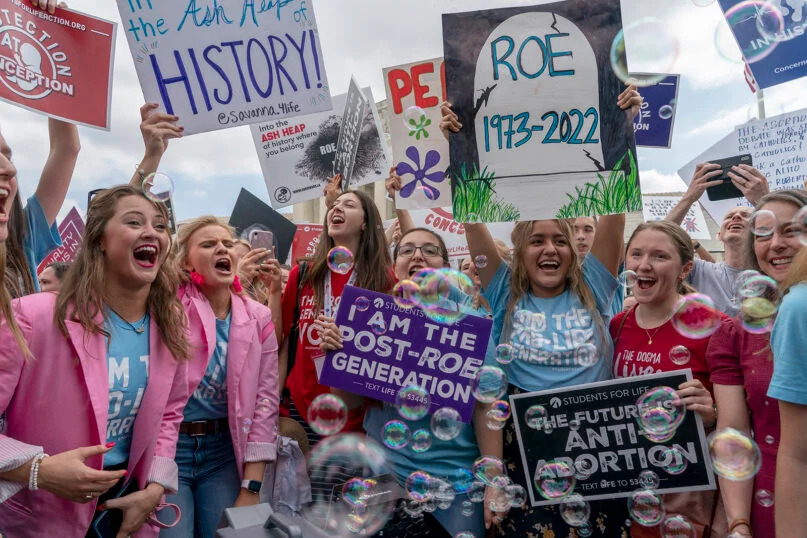 Bob Smietana for Religion News Service reports on PRRI’s latest survey on abortion, fielded immediately following the overturn of Roe v. Wade. The survey found that white evangelical Protestants continue to be the exception when it comes to abortion legality — almost all want to see abortion banned after 15 weeks, and more than half said providing an abortion should be a felony. The survey found Catholics, Black Protestants, non-Christians, and unaffiliated Americans are more supportive of abortion rights than white evangelical Protestants, who favor more restrictions than any other religious group. Melissa Deckman, Ph.D., CEO of PRRI, stated that overall, support for legal abortion had risen in the past decade. In 2010, PRRI found that 55% of Americans said abortion should be legal in most or all cases; today, Deckman highlights that number has jumped to two-thirds.

Abortion has increasingly become a make-or-break issue for voters. The recent PRRI survey found that a third of Americans will only vote for candidates who share their views on abortion. “Historically, those individuals who oppose abortion rights have always been much more likely to say they will only vote for someone who shares that view,” Deckman said. “We’ve known that for decades. But all of a sudden, nationally we’re finding that with Roe’s reversal, that in fact, those who are supportive of abortion rights are now saying this is key to their vote decision.”

The Washington Post’s Philip Bump analyzes the case of a 10-year-old rape victim in Ohio who traveled to Indiana for an abortion after her home state’s “heartbeat bill” took effect following the fall of Roe v. Wade. A number of conservative lawmakers and officials claimed the story was “fake news,” and even after police arrested the rapist, some officials insisted that the Indiana doctor should instead be the focus of an investigation. Bump writes that some GOP politicians and activists are now competing with one another to stake out the most conservative positions possible on abortion.

Bump focuses on the response of Ohio Attorney General Dave Yost, who, he writes, “tried to downplay the idea that his state’s laws blocking abortion were too strict.” Yost initially called the girl’s story a “fabrication.” In fact, the Columbus Dispatch reported that there were 52 incidents in which children under the age of 15 obtained an abortion in the state in 2020, an average of one each week. Bump also cites PRRI’s latest abortion survey, which found that “about half of Republicans opposed a law in which the only allowed exception would be to save the life of the mother. Only a bit over a third opposed a law tightening access to include only preserving the mother’s life or pregnancies resulting from rape or incest.”

PRRI Public Fellows Nazita Lajevardi, Ph.D., Evan Stewart, Ph.D., Roy Whitaker, Ph.D., and Tarah Williams, Ph.D., authored a new spotlight analysis examining the history of American political polarization. The fellows write about two dominant versions of American identity: pluralism and exclusion. Regarding the pluralistic vision, the United States is often described as a “nation of immigrants” where people of diverse religious and political views can coexist. In fact, the marginalized in America have cited the founders’ pluralistic ideals for centuries as they argue for a more inclusive democracy. The exclusionary vision of the United States, on the other hand, says that American identity is not available to all.

The writers cite an example from the 19th and early 20th centuries where Asian Americans and Latino Americans made legal claims for rights, but were then “forced to argue that they fit either ‘white’ or ‘black’ definitions of citizenship. Both during that period and since, citizenship held by immigrants and/or racialized minorities is insufficient to be considered ‘American.'” Since 2015, PRRI has asked questions about the views and beliefs that assess how important the following factors are to being “truly” American: being a Christian, being born in America, being able to speak English, and believing in God. The author’s analyses found that, while the hard boundaries of what it means to be “truly American” have decreased over time and trends “suggest slight movement toward inclusion,” many still believe that “religious identities and beliefs, language, and place of birth dictate who counts as a true American to some degree.”