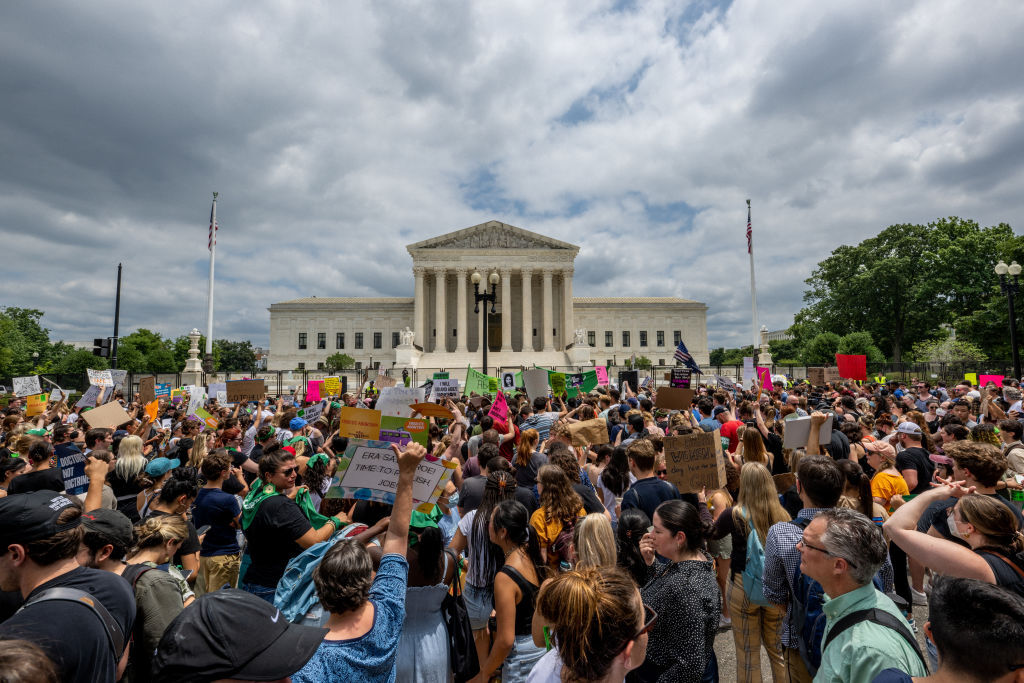 Democrats have become much more likely to say they will only vote for a candidate who shares their views on abortion, according to a new report released by PRRI yesterday. According to the survey, fielded immediately after the U.S. Supreme Court overturned Roe v. Wade, more than four in ten Democrats (43%), now indicate this is a crucial aspect of their vote, compared to only 17% who said the same in the fall of 2020. This is the first time in PRRI polling that Democrats have been more likely than Republicans (31%) to say a candidate must share their view on abortion in order to get their vote.

“The historic reversal of Roe, which we find is opposed by most Americans, will likely play a major role in this fall’s midterm elections and beyond, with the issue being particularly salient with younger women and Democrat women voters,” said Melissa Deckman, Ph.D., PRRI CEO. “Moreover, as some state legislatures move to restrict the sale of FDA-approved abortion drugs or to restrict women from seeking abortion in states where it is legal, our new study finds most Americans, regardless of party affiliation, would oppose such measures.” Read the full report here.

Religious Activist Claims To Pray With Justices Inside SCOTUS

Kara Voght and Tim Dickinson report for Rolling Stone that Peggy Nienaber, “a prominent Capitol Hill religious leader,” claimed on a hot mic that some U.S. Supreme Court Justices “will pray with us, those that like us to pray with them.” Outside of the Supreme Court at an “evangelical victory party” following the overturn of Roe v. Wade, Nienaber, who did not know she was being recorded, continued: “We’re the only people who do that,” claiming she and others in her organization pray with the justices inside the Supreme Court.

The authors highlight that Liberty Counsel, where Nienaber is executive director of DC Ministry, “frequently brings lawsuits before the Supreme Court.” The conservative majority even cited an amicus brief authored by Liberty Counsel in its ruling that ended the right to abortion. Adam Winkler, a Supreme Court expert at the University of California Los Angeles stated, “The problematic aspect isn’t whether they’re praying,” Winkler says, “but that several justices seem committed to reading their religion into the Constitution.” According to PRRI’s new abortion survey, nearly three in four white evangelical Protestants (73%) say their religious faith dictates their views on abortion, compared with 33% of Black Protestants, 33% of white Catholics, 32% of Hispanic Catholics, 26% of white mainline Protestants, 20% of non-Christian religious Americans, and 7% of religiously unaffiliated Americans.

Analysis: Utah at the Center of GOP Skepticism of Trump

Philip Bump for The Washington Post recently analyzed the parallel between Sen. Mitt Romney’s dislike of former President Donald Trump with many Utahns. “In 2000 and 2004, Utah had the widest margin for Republican presidential candidates of any state,” he writes. It fell in 2008, then rebounded in 2012 when Romney was on the ticket, voting “more than 50 points more Republican than the national margin that year.” The arrival of Donald Trump brought Utah back down below the average of Republican-voting states.

Bump attributes this skepticism — at least in part — to religion, writing, “Utah has a high percentage of residents who are members of the Church of Jesus Christ of Latter-day Saints. Of the 10 counties with the highest density of adherents to the religion, according to PRRI’s 2020 Census of [American] Religion, nine are in Utah. (The 10th is in Idaho.)” A statement from the church decried Trump’s effort starting in 2017 to enact a ban on visitors from seven majority-Muslim countries: “The Church of Jesus Christ of Latter-day Saints is neutral in regard to party politics and election campaigns. However, it is not neutral in relation to religious freedom.”