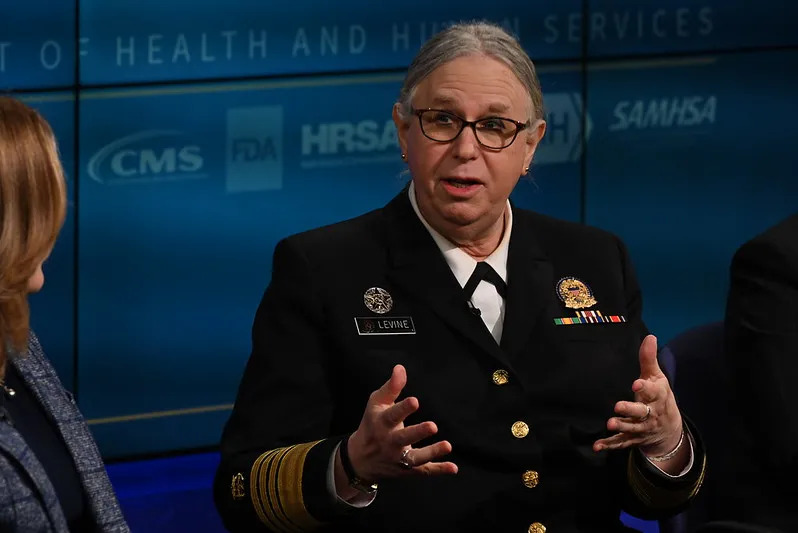 Nation’s Most Senior Trans Official: ‘We Have a Lot of Challenges Ahead’

Kristen Parisi for The Morning Brew’s newsletter HR Brew shares an interview with U.S. Assistant Secretary for Health Adm. Rachel Levine, the highest-ranking openly transgender official in the federal government. Levine started her career in public service in 2015, more recently serving as Pennsylvania’s secretary of health. Parisi interviewed Levine about coming out as transgender at work a decade ago at the Penn State College of Medicine, as well as Levine’s position on the responsibility of employers to speak out against anti-trans legislation. Levine stated, “I really felt as I talked with people [that they] understood that I was not just tolerated, and not even just accepted, but truly welcomed for the diversity that I brought [to] the medical center and to the College of Medicine.” She continued: “At the same time, we have a lot of challenges ahead and you can see that in the proliferation of the very negative actions and policies and laws that have cropped up in many states around the country, particularly in regards to trans youth and trans youth participation in activities or sports, as well as the accessibility of trans-affirming, gender-affirming care.”

‘Wave of New Abortion Restrictions’ Ahead of SCOTUS Ruling

Caroline Kitchener for The Washington Post reports on the rapidly developing legislation surrounding the legality of abortion ahead of a U.S. Supreme Court decision this June. On Wednesday, the Kentucky legislature overrode a veto by Democrat Gov. Andy Beshear “to pass strict restrictions that have already forced clinics in the state to stop providing abortions.” Beshear vetoed the bill earlier this month due to the lack of exceptions for rape and incest. “Victims of these crimes should have options, not be further scarred through a process that exposes them to more harm from their rapists or that treats them like offenders themselves,” he wrote. A day after lawmakers acted in Kentucky, Republican Gov. Ron DeSantis of Florida signed a bill that will ban abortion after 15 weeks of pregnancy. The 15-week bans in Kentucky and Florida, both of which include exceptions for the life of the woman but not for rape or incest, “are modeled after the Mississippi law that is currently before the Supreme Court,” Kitchener wrote. “Republican lawmakers have said they settled on a 15-week ban to maximize the chance that their legislation can take effect soon after the Supreme Court announces its decision this summer.”

Mark Joseph Stern for Slate also adds that Republicans in Missouri are currently “considering legislation that would [allow] private citizens to sue anyone who helps a woman cross [out of] state lines for the procedure.” The New York Times’ Giulia Heyward reports that last weekend, however, Maryland lawmakers overrode Republican Gov. Larry Hogan’s veto to expand access to abortion services, joining 14 other states in allowing trained medical professionals other than physicians to perform the procedure. PRRI research found the following percentages of each state’s residents saying abortion should be legal in all or most cases: Maryland, 62%; Florida, 56%; Kentucky, 43%; and Texas, 48%.