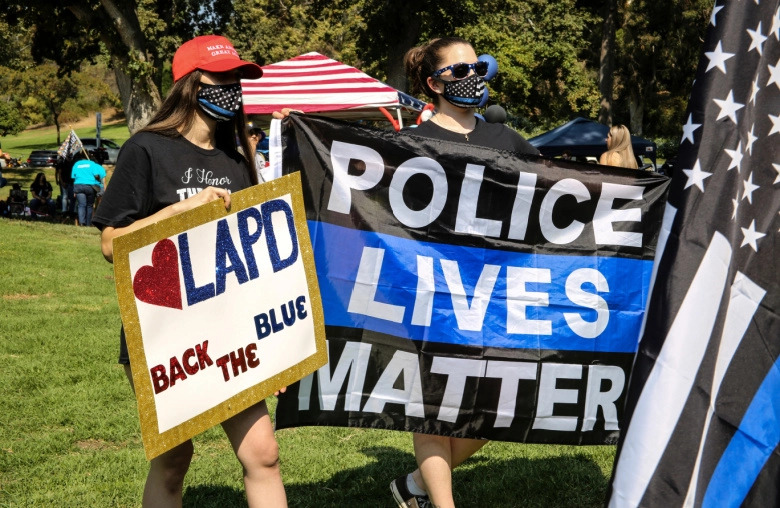 PRRI Public Fellow Aaron Griffith writes for Religion & Politics about recent news that a 2017 police firearms training in Louisville, Kentucky, included a verse from the Bible. The Louisville Metro Police Department presented the scripture against a background depicting a “thin blue line” American flag, a symbol that represents the Blue Lives Matter movement. The officers who killed Breonna Taylor in 2020 were in the same department. Griffith writes, “[The use of scripture] also mirrors other forms of Christian influence in modern American law enforcement such as police-themed Bibles, Christian police retreats and trainings, and similar blue-hued religious emblems.” He notes that critics argue such imagery is a threat to the separation of church and state.

The level to which this notion has become a part of police ideology can be found in Holman’s “Law Enforcement Officer’s Bible,” which states that Jesus is “the most pro-cop person in the universe.” After the Louisville firearms manual became public, Baptist pastor F. Bruce Williams stated, “Given the long, nightmarish history that Black people have not only with LMPD but with police departments in general, that’s a very scary prospect to have a Bible verse like that and to describe the police force as the wrath of God to carry out justice on evildoers.” PRRI polling has shown that, while 61% of Americans trust police “to do what is right” either “just about always” or “most of time,” white evangelical Protestants and white Roman Catholics express the same sentiment more often (82%), with white mainline Protestants not far behind at 80%. Griffith concludes: “However, white Christian police support also provides religious justification for a profession that is violent, that disproportionately affects the poor and communities of color, and that has a tragic record of racism.”

The Case for Reopening ICE Detention Centers for Social Visits

PRRI Public Fellow Luis A. Romero writes for the Los Angeles times that immigrant detention centers in the United States lagged behind the rest of the world and, until very recently, have remained on strict pandemic lockdown. Romero notes that no one other than attorneys have been allowed to enter these sites for more than two years—eliminating visits from family members, friends, and advocates. The only connection migrants in U.S. Immigration and Customs Enforcement detention centers have had to their families and friends is through emails, video and phone calls, and physical letters. He underscores that being held in an immigration detention facility is not a punishment for breaking a law and that migrants are waiting for the adjudication of their cases in civil court, but that it is still very much a form of incarceration. “Many are asylum seekers and more than 60% of those held have no prior criminal record,” he writes.

Accounts of substandard medical care, sexual abuse and solitary confinement have surfaced, and reports of abuse have continued under the Biden presidency. Romero describes how detainees must navigate a confusing bureaucracy and must live “confined by limbo.” PRRI found that as of late 2021, PRRI data found that about six in ten Americans (62%) say that immigrants living in the U.S. illegally should be allowed a way to become citizens provided they meet certain requirements.”

PRRI Public Fellow Jonathan S. Coley writes for The Washington blade that the “student-led movement for LGBTQ inclusion is gaining ground” in “one of the unlikeliest settings—Christian colleges and universities.” Coley has collected extensive data on U.S. Christian colleges’ policies toward LGBTQ students over the past few years. He notes that in one study, he found that 55% of all Christian universities in America have nondiscrimination policies inclusive of sexual orientation. Data collected by Coley in 2013 found that nearly one-third of all Christian institutions had adopted bans on so-called “homosexual acts” or “homosexual behavior” in their student handbooks. Over this past year, he reexamined handbooks again and found that less than a quarter had such discriminatory bans.

Coley notes that one of the most important reasons colleges and universities are embracing LGBTQ students is due to Christian denominations that already have. He explains: “Those Christian colleges and universities that are already associated with affirming denominations are certainly among the most likely to affirm their LGBTQ students.” He also points out that, “Just as Christian hospitals do not refuse to provide medical treatment to people who are not members of their associated denominations, many Christian colleges and universities have chosen not to deny people an education simply because certain people are not members of their associated denominations.” PRRI research finds that vast majorities of most major religious groups support nondiscrimination protections for LGBTQ people, including Buddhists (87%), Catholics of color (87%), Jewish Americans (85%), Hindus (85%), Latter-day Saints (84%), Hispanic Catholics (83%), white mainline Protestants (82%), white Catholics (80%).