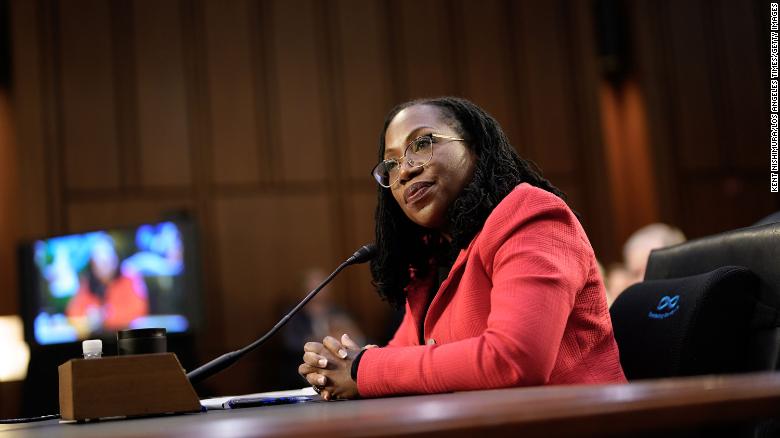 How Jackson Will Sharpen the Supreme Court’s Core Conflict

Ronald Brownstein for CNN Politics recently reported on Judge Ketanji Brown Jackson’s confirmation process and its larger implications for state- and federal-level legislation as most liberal advocates, he says, “are bracing for the GOP-appointed majority to enable the broad drive underway in red states.” Federal projections suggest that students of color will make up a majority of the graduating class from public high schools this June. Notwithstanding, the Supreme Court has accepted two cases for its next session that it may use to ban or severely restrict the use of affirmative action to increase the share of minority students admitted to colleges and universities , Brownstein writes. “That coincidental, but revealing, convergence of legal and demographic change captures the core conflict that Ketanji Brown Jackson will both inherit and sharpen.”

According to PRRI’s 2020 Census of American Religion, two-thirds of Republicans (68%) identify as white and Christian, compared to 39% of Democrats. The relevance of these numbers today is that the high court is poised to “[cement] into law the priorities and preferences of older White Christian conservatives,” which disagree sharply with the priorities of younger generations of Americans who are more racially diverse, less likely to identify with a religion, and more likely to identify as LGBTQ. Republican senators have gone so far as to suggest the court “had erred in earlier rulings striking down state prohibitions against same-sex marriage (Sen. John Cornyn of Texas), the sale of contraception (Sen. Marsha Blackburn of Tennessee), and even interracial marriage (Sen. Mike Braun of Indiana).” Robert P. Jones, CEO and founder of PRRI, stated that the common goal for older conservatives is “to imprint the culture and the community with our worldview in a way that is very hard to undo… We have that with the current GOP with (state) laws and Supreme Court rulings that might take a generation to undo.”

Katie Glueck and Patricia Mazzei for The New York Times write about the ongoing battle surrounding classroom instruction, youth sports and health care. “These issues are pitting governors against their state legislatures, business leaders against conservative activists… while Democrats calibrate their responses and some transgender people feel increasingly isolated.” The authors highlight that these legislative pushes are working to incite the GOP base and drive Republicans to the polls for the midterms regardless of the impact it may have on transgender children and their families. The legislation and tug-of-war so far in 2022 has included efforts to restrict transgender youths’ health care and participation in girls’ sports, including Florida’s Parental Rights in Education law, dubbed by critics as the “Don’t Say Gay” bill. Glueck and Mazzei stress that the debate “has turned ugly,” with proponents of the new Florida law calling anyone who opposes it “groomers,” which is associated with “pernicious decades-old smears” implying that all LGBTQ people are pedophiles planning to convert children or sexually molest them.

Some Republicans have opposed these legislative efforts, including Utah Gov. Spencer Cox, who stated in a recent letter vetoing an anti-trans student-athlete bill that there were four transgender children out of 75,000 high school athletes in the state, and only one of them was playing girls’ sports. Over the weekend, Gov. Cox responded on Twitter to right-wing critics, writing, “If you have to doctor a video to make a kind gesture to a nervous kid look bad, that says more about you than me.” PRRI research found that a slim majority of Americans who know a transgender person (52%), compared to one-third of Americans who do not know anyone who is transgender (33%), believe that someone who was assigned male at birth but now identifies as female should be allowed to compete in high school sports with cisgender female students.

Mike Ferguson for the Presbyterian News Service reports on the NETWORK Lobby for Catholic Social Justice’s “White Supremacy and American Christianity” half-day conference held Saturday that was attended by about 2,500 people. The keynote panel included PRRI founder and CEO Robert P. Jones, Fordham University professor Fr. Bryan Massingale, and Georgetown University history and African American studies professor Marcia Chatelain. Massingale encouraged those participating to reflect on what about Christianity is inherently racist. “We have this idea of people who marched with torches in Charlottesville or those who stormed the Capitol in January of last year,” Massingale stated. “But what we are talking about is people in church, that white Christianity itself incubates a sense of white superiority.” Massingale has found that when he presents on racism and white supremacy, “People ask, ‘How can I talk about this in my parish and not make white people uncomfortable?’ I turn it around: ‘Why is it the only group that is never supposed to feel uncomfortable talking about race is white people?’”

PRRI research shows that nearly 4 in 10 Americans (38%) agree that, “Today, discrimination against whites has become as big a problem as discrimination against blacks and other minorities,” compared to a 61% majority who disagree with the statement. Among religious groups, majorities of white evangelical Protestants (56%) and white Catholics (51%) agree with the same statement, as do more than 4 in 10 white mainline Protestants (43%). In conclusion, Jones stated: “This commitment to white supremacy is the air we breathe and the water we swim in. We don’t see how it has distorted the gospel and affected our ability to love one another.”