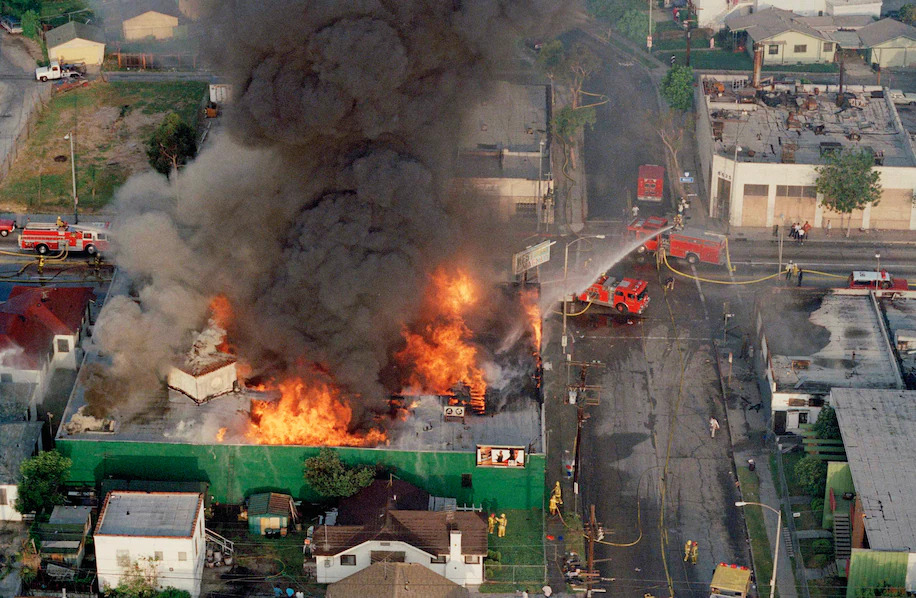 PRRI Public Fellow Jane Hong recently wrote for The Washington Post about the 30th anniversary of the 1992 Los Angeles riots and how they triggered a “movement toward racial reconciliation in white evangelical circles.” Following the acquittal of police officers who violently beat Rodney King, the city saw six days of extreme destruction and violence that left more than 50 people dead. Hong notes that the uprising resulted in calls for renewed civic discourse about police brutality, violence across the nation, and the future of neighborhoods like South Los Angeles. While some used the violence to further incite culture and racial divisions, the Southern Baptist Convention issued a “long-awaited apology for supporting chattel slavery and passed a resolution declaring its commitment to racial reconciliation.” The Promise Keepers also emerged as a well-known group challenging white evangelical men—but the parachurch organization received criticism for viewing racism as something that could be solved by interracial friendships versus structural change.

Hong writes that Latino and Asian Americans joined the conversation after 1992, citing Christianity Today Latino journalist Andres Tapia, who asked whether the “white Promise Keeper wanting to hug me” had ever considered how the immigration policies they supported “terrorized Latinos in the United States.” Sociologists Michael Emerson and Christian Smith described how white evangelicals “perpetuated” racial division through the idea that racism was a problem of individuals versus systems or structures. The deaths of Trayvon Martin and Michael Brown in 2012 and 2014, respectively, challenged the evangelical commitment to racial justice, culminating in the 2016 election in which 81% of white evangelicals supported Donald Trump; most Black, Asian, and Latinx Christians did not. PRRI research found that white evangelical Protestants are the religious group most likely to agree that the United States has made great progress in achieving true racial equality; 54% agree.

Making the Case for Black Church Support of LGBTQ Rights

Kelsey Dallas for Deseret News reports on the response of Black Christians to two pieces of stalled federal LGBTQ legislation through the lens of Many Voices, which describes itself as a “Black church movement for gay and transgender justice.” The Rev. Cedric Harmon, who founded Many Voices, tells people that gay and transgender Americans are not seeking special treatment. “What they want,” he says, “are the same basic blessings [we] ask for at church.” Harmon has called upon his fellow clergy to publicly support same-sex marriage. During a webinar last week titled, “The Black Church and LGBTQ Rights,” Harmon spoke about the Equality Act and another proposed bill that some have called a religious freedom-based compromise called the Fairness for All Act.

Both bills “would add sexual orientation and gender identity-based nondiscrimination protections to federal civil rights law,” Dallas explains. “The Equality Act, which passed the U.S. House of Representatives in February 2021, would do so without creating new safeguards for churches and other religious organizations. The Fairness for All Act, on the other hand, attempts to protect LGBTQ individuals and religious organizations that oppose same-sex marriage at the same time.” During the webinar, Chantelle Anderson, founder of a women-focused religious group, said that churches already teach that preserving human dignity is a good thing. “No matter what we believe doctrinally, we should all agree that people don’t need to be discriminated against, harassed, abused, or killed because of their sexuality or gender identity,” she said. Harmon told attendees, “The legislation we’re talking about would guarantee access to housing, health care, food, and employment—blessings that everyone should have the ability to enjoy.” As of 2021, PRRI found that nearly 8 in 10 Black Protestants (78%) supported laws that would protect members of the LGBTQ community from discrimination, but just 55% supported same-sex marriage.

PRRI founder and CEO Robert P. Jones and Elie Mystal, who covers criminal justice for the weekly news magazine The Nation, recently appeared on MSNBC’s The ReidOut with Joy Reid to discuss a case argued before the U.S. Supreme Court last week concerning the separation of church and state. The original lawsuit centers on football coach Joe Kennedy, who prayed after games on the 50-yard line for eight years, with officials eventually telling him public schools couldn’t appear to endorse religion. Reid summarized: “The school informed him that his public prayer violated state law and school guidance; they offered him multiple accommodations, which he declined.” Though Kennedy claims he was fired and filed suit, he was actually placed on administrative leave, with his contract expiring during that time.

Reid described Kennedy as the “newest martyr of the religious right” as all of the lower courts ruled against him. The Supreme Court, she noted, has now signaled that they may side with Kennedy. Jones responded, “It basically goes to this basic claim, this brazen claim, that America is essentially meant to be a white Christian nation. These are very intentional acts. He didn’t go to the parking lot to pray, he went on the 50-yard line under the lights.” Jones also noted that Kennedy said he was inspired by a movie where a coach did the same thing, but in the film, the school is a private Christian academy. Mystal added, “The very same people who are making this argument that we have to accept their religion in schools, are the very same people who say that we can’t force public schools to teach the accurate history of slavery.” PRRI research shows that, “White evangelical Protestants (72%) are by far the religious group most likely to think religious liberty is being threatened. Less than half of all other religious groups believe that the right of religious liberty is threatened in America today, including white Catholics (44%), white mainline Protestants (42%), and Protestants of color (41%).”