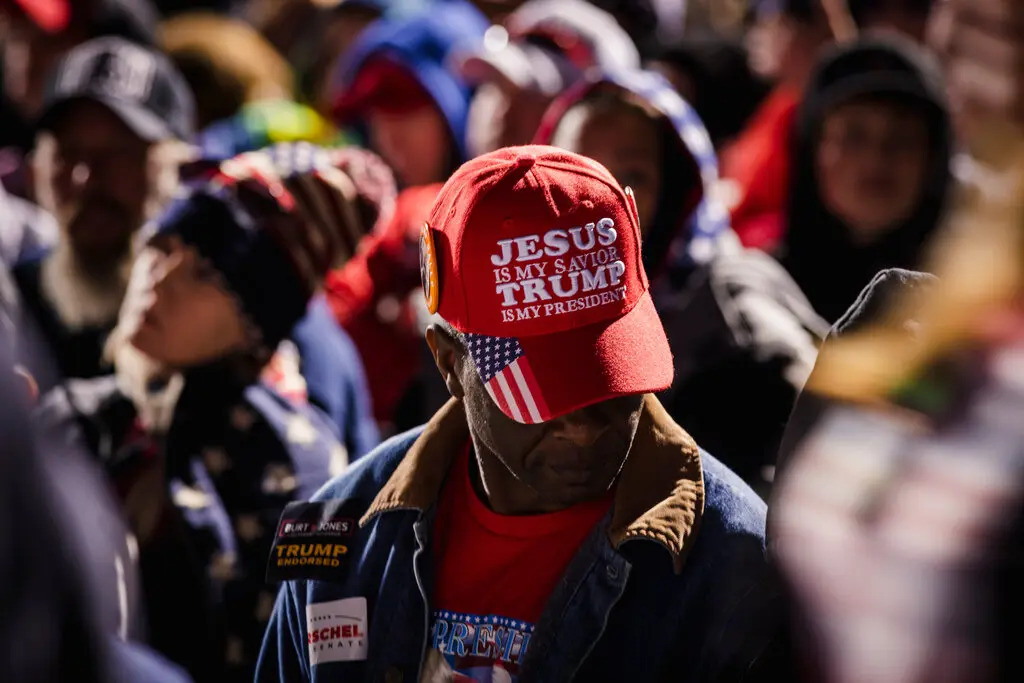 Charles Homans for The New York Times reports on the “crusade” among evangelicals and other far-right religious conservatives who are actively supporting both the message and messengers in maintaining that the 2020 presidential election was stolen from Donald Trump. Evangelical churches have long been “powerful vehicles” for anti-LGBTQ and pro-life mobilization, Homans writes, becoming Trump’s “most loyal constituency” in 2020 and then adopting the stolen-election storyline into their messaging. Support is not universal: in a sermon the Sunday after last year’s U.S. Capitol insurrection, the lead pastor of the evangelical Denver United Church, Rob Brendle, criticized some “Christians’ embrace of the Jan. 6 attack” and lost about a hundred members of his 1,500-person congregation.

On the other hand, at a “Rally for Revival” in Washington the night before the insurrection, Alex Jones of Infowars and Greg Locke, leader of the Global Vision Bible Church, led a prayer for the far-right, neo-fascist Proud Boys. Locke has appeared on the ReAwaken America Tour, a roadshow that featured “far-right Republican politicians, anti-vaccine activists, election conspiracists and Trumpworld personalities.” Research by PRRI found that 60% of white evangelical Protestants continue to believe that the election was stolen. This is a significantly larger proportion than other Christian groups of any race, Homans notes, including 40% of white Catholics, 19% of Hispanic Catholics and 18% of Black Protestants.

A High School Football Coach Vs. The Supreme Court

Kelsey Dallas for the Deseret News details the case of Washington state high school football coach Joe Kennedy, which the U.S. Supreme Court heard this morning. After every game from 2008 to 2015, Kennedy would bow his head at the field’s 50 yard line and thank “God for his work on the field.” Over the years, Kennedy’s players—and even members of the opposing teams—would join him. During his eighth season, officials told Kennedy that “public schools couldn’t appear to endorse religion and asked him to return to his original practice of praying alone.” That direction has since evolved into a seven-year struggle in which Kennedy argues the school district misinterpreted “his intentions,” claiming he only wanted to “quietly thank God at the 50-yard line… not to derail the football program or spark a culture war.”

Rachel Laser, president and CEO of Americans United for Separation of Church and State, stated, “What’s shocking is the coach thinks his religious interests matter more than the [school] district’s duty to protect students and keep religious spectacles off the football field.” Though legal experts are at odds about the outcome of the ruling, there is consensus that “it could lead to the court’s most significant religious freedom ruling this term.” PRRI research found that despite frequent disagreement on how to implement freedom of religion, the vast majority of Americans understand the basic religious protection offered by the First Amendment to the U.S. Constitution. Nearly 9 in 10 Americans (88%) agree that the U.S. government cannot establish an official religion or favor one religion over another, including 68% who completely agree with this statement. Overwhelming agreement with this statement is consistent across all demographic groups. Only 11% of Americans disagree with the idea that the government cannot establish an official religion.

Gary Finnegan for The Guardian writes about the “challenge of building trust” in the face of declining routine vaccination rates amidst the COVID-19 pandemic. While almost 12 billion COVID-19 vaccines have been distributed in the last 18 months, albeit unevenly across the globe, some 30 million children have not been able to receive “basic vaccinations during the pandemic,” with children in southeast Asia and the eastern Mediterranean region being impacted the most. This is in part due to COVID-19 causing clinics to close with staff being diverted, Finnegan explains. Conversely, there are also those who haven’t gotten vaccinated themselves or vaccinated their children even though they have the opportunity. “The reality is that vaccine hesitancy is a spectrum.”

Finnegan argues that, although the hostility against those who refuse vaccines has grown, “lumping them together into a homogenous group of ‘anti-vaxxers’ is unwise,” as they may not actually be against anything, but just are skeptical overall of vaccines. Attempting to separate people from their “philosophical, religious or political attitudes” can offer a hopeful alternative to rhetoric that otherwise pushes people to complete refusal. PRRI research from last fall found that nearly 8 in 10 Americans (77%) were vaccine acceptant. The majority of unvaccinated Americans were vaccine refusers (13%), compared to the 9% who are vaccine hesitant. The profile of vaccine refusers has remained consistent across last year’s three PRRI–IFYC surveys on religion and the vaccine, with the highest rates of resistance among Republicans who most trust far-right news sources such as Newsmax or One America News Network (42%), multiracial Americans (31%), and white evangelical Protestants who regularly attend religious services (30%). “There is a growing acceptance that facts alone are not enough to win people over,” Finnegan concludes.