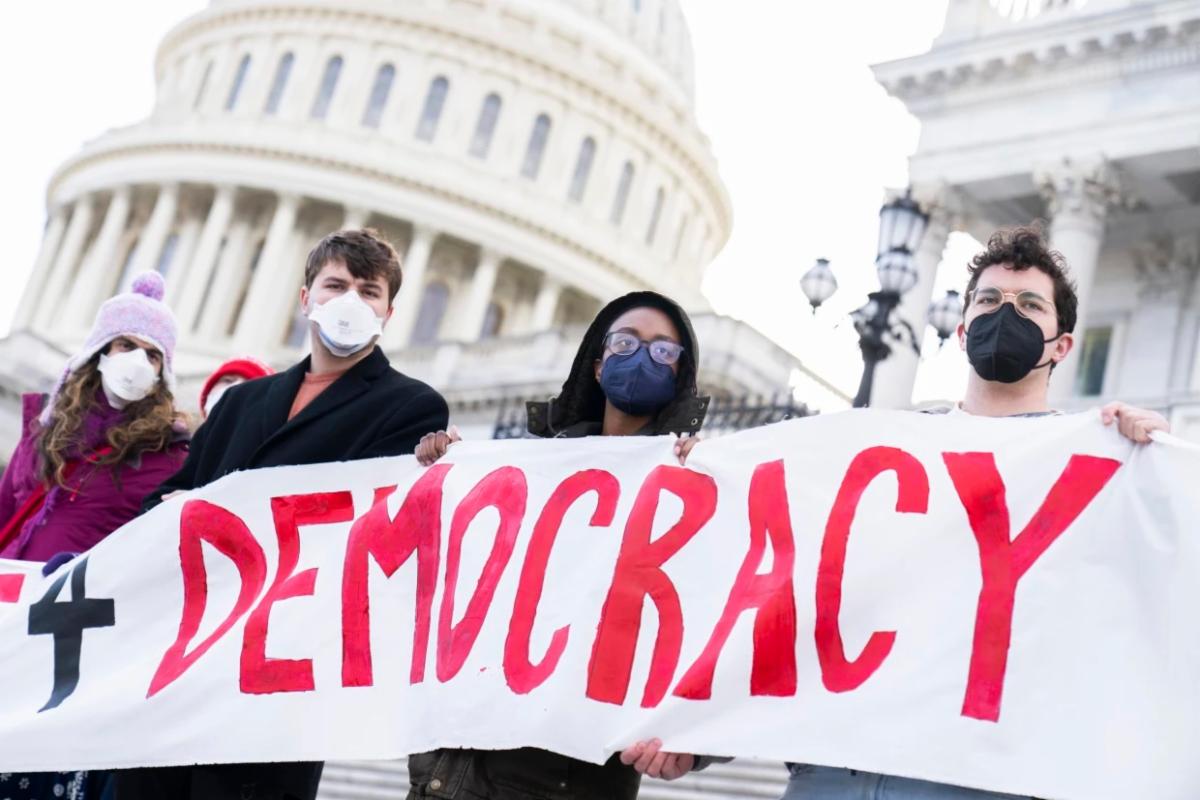 Despite Collapse of Voting Rights Bills, Grassroots Organizing Continues Around the Country

Char Adams for the NBC News site NBC BLK recently reported on grassroots organizers around the country who have continued to apply pressure on lawmakers after Senate Republicans blocked a pair of voting rights bills on January 19. The federal legislation would have helped combat voter suppression by doing everything from “creating a national automatic voter registration to banning partisan gerrymandering,” she writes. The Senate vote earlier this month coincided with the decennial redistricting process taking place in states across the nation; Adams noted that experts see this year’s redistricting as having a “high risk of being gerrymandered” in several states. She reported that at least 12 states enacted voting restrictions in 2021, the same year a leaked video exposed efforts in Texas to create an “army” of 10,000 poll workers from the suburbs to fight alleged voter fraud in Black communities and other communities of color in Houston’s urban core. PRRI published an analysis titled, “Elections, Voting, and Fraud” earlier this month; findings included a majority of Americans (55%) who say they are more worried about eligible voters being denied their right to vote than the 42% who say they are more concerned with ineligible voters.

Bob Smietana for Religion News Service reports from Milwaukee’s Eastbrook Church, a multi-ethnic congregation that welcomes refugees, immigrants and international students “at a time when American evangelicals are increasingly suspicious of newcomers to the United States.” At Eastbrook, gospels and Psalms are recited and sung in multiple languages, and over the past several decades, the church has benefited from an outreach ministry to international students at a nearby university. Smietana cites a PRRI’s 2021 report, “Immigration After Trump: What Would Immigration Policy That Followed American Public Opinion Look Like,” which found that nearly six in ten (59%) white evangelical Protestants agreed with the statement, “Immigrants are invading our country and replacing our cultural and ethnic background.” Only 31% of Americans overall agreed with that statement. Eastbrook Church also opens its doors to refugees and immigrants, offering English as a Second Language classes and helping with housing and education issues at its satellite International Community Center, which serves as many as 30 people per day. Dan Ryan, senior director of mission at Eastbrook, said he understands some of his fellow evangelicals are resistant to the idea of resettling refugees, but that churches need to reach out in love. “Yes, have your political ideas,” he said. “But don’t lose sight of the people involved.”

The Lesson About COVID-19 Misinformation Found in a Baroque Painting

David B. Gowler for The National Catholic Reporter explores how we can promote useful dialogue amid COVID-19 and political turmoil when much of the contemporary public debate is driven by fear and deception. Gowler turns to Italian Baroque painter Domenico Fetti’s “The Mote and the Beam” for insight. In the painting, an older man is immersed in an argument with a younger man as a wooden beam looms large in front of the elder’s face; a splinter from the beam nearly touches the younger man’s eye. “The Mote and the Beam” portrays a timeless conundrum that requires one to remove the proverbial beam before helping another remove the mote, or speck. “Once people seriously engage in self-reflection, they can more clearly see their own faults and limitations,” leading to what Gowler describes as “a more compassionate and merciful assessment of the faults of others.” Gowler cites recent PRRI-IFYC data that he says “provides hope about the ability to convince some reluctant people to be vaccinated.” The July 2021 PRRI-IFYC Religion and Vaccine Survey found that faith-based approaches can be effective for those who are hesitant about or refuse to get the COVID-19 vaccine. Gowler concludes that, in contrast to the loving community put forth by followers of Jesus, some voices today have tried to create a “warped” community based on fear or even hatred of the “other.”