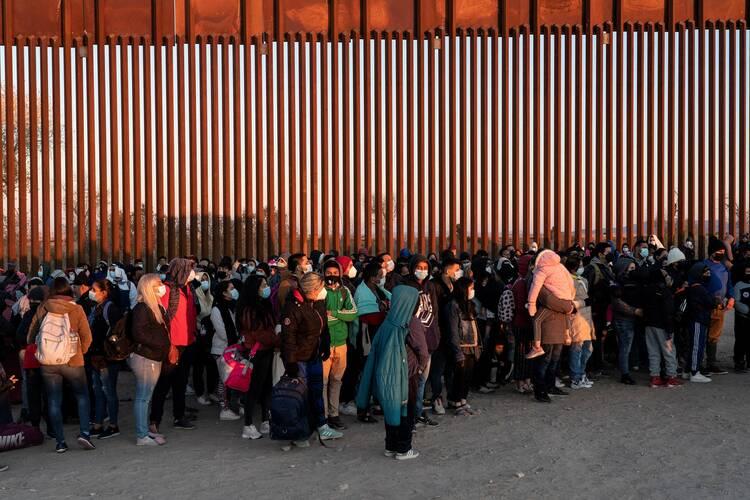 Rhina Guidos for Catholic News Service recently reported on a lawsuit filed against the Biden administration by CatholicVote, a Wisconsin-based political advocacy group. The suit seeks communications records between the administration and the Roman Catholic Diocese of Brownsville, located on the Rio Grande at the southern tip of Texas, including Bishop Daniel E. Flores, as well as Sister Norma Pimentel, a Mexican-American Missionaries of Jesus nun who serves as the head of Catholic Charities of the Rio Grande Valley. CatholicVote is “demanding transparency from the federal government and to know whether and how it has fueled and coordinated with Catholic-affiliated charities in facilitating a record surge in illegal immigration.” The organization has used geofencing technology to target cell phones of people who attend Mass with mobilization messages to vote for former President Donald Trump. Guidos notes that, because Catholics historically have experienced forced nomadism, they provide programs “throughout the world to welcome and accompany those who are forced to leave their homelands.” Pope Francis has praised Sister Pimental for her work with migrants on the Southern border, telling her last year, “Thank you for welcoming and receiving these migrants who come in search of a better life. Some come to advance, while others are fleeing from true social hells.” The 2021 American Values Survey from PRRI in November found that one-third of Republicans (32%), two-thirds of independents (65%), and more than eight in ten Democrats (82%) say that immigrants strengthen the country because of their hard work and talents.

Paola Fuentes Gleghorn for Sojourners reports on the decrease in white evangelical support for immigration reform as 11 million undocumented and under-documented immigrant people in the United States have worked to gain a pathway to citizenship. In 2013, Gleghorn writes, “a diverse group of evangelical leaders and Christian groups worked closely with a bipartisan congressional group to try to pass immigration reform through what became known as the Evangelical Immigration Table.” That year, the U.S. Senate passed a bipartisan compromise on immigration reform that would increase border security and provide a pathway to citizenship for undocumented immigrants; the legislation never made it to the U.S. House, leading to controversy when thousands of children from Central America arrived at the Southern border seeking asylum. Nine years later, there has been a “concerted effort” to pass a bill through the federal budget process, but “not a single GOP senator has supported the effort, and even some moderate Democrats have stepped back from the bill.”

Given February is Black History Month, Gleghorn notes that religious groups stepped up decades ago to welcome West African migrants seeking asylum from political turmoil and violence in their home countries. This tradition is seen today as many religious groups continue to be involved in helping Black migrants from nations like Cameroon and Sudan get Temporary Protected Status, which allows an American president to offer protection to those who cannot safely return to their home nations. Though she says she has hope for immigration reform, she concludes that there is “a clear connection between the white nationalist pursuit of ‘keeping America great’ and anti-immigration sentiment.” Gleghorn cites a PRRI report on immigration from earlier this month that found only 47% of white evangelicals say they support a pathway to citizenship, down from 56% in 2013. The gap widens among those who attend religious services weekly or more, from 58% supporting a pathway to citizenship in 2013 decreasing to 45% in 2021.

In spring 2020, PRRI received an emergency grant from the Henry Luce Foundation’s pandemic response supporting communities and organizations affected by COVID-19. This grant allowed PRRI to convene with a group of other Luce emergency grantees developing and implementing public-facing pandemic support programs specifically designed for their local communities. As the grants came from Luce’s Theology Program, PRRI created a framework for 10 emergency grantees that included schools of religion, divinity schools, and affiliated research centers. Through a year-long series of convenings, the grantees had a space to come together, develop programs providing direct pandemic support, and share best practices in both implementation and the documentation of the local programs’ stories with key stakeholders.

Included in the PRRI cohort was the Chicago Theological Seminary, where the Rev. Brian E. Smith, director of strategic partnerships for the seminary, used the Luce emergency grant to develop the Black Faith Leader Collective. At the start, the seminary conducted listening sessions to understand the pandemic’s impact on faith communities, followed by more than 30 technology support grants and the provision of resources for pastoral counseling. As the program took shape, Rev. Smith formed a network of more than 40 Christian, Jewish, and Muslim faith leaders from Chicago’s south and west sides that continues to provide a forum for cooperative education and support as the city’s religious communities navigate life amidst a global pandemic. The seminary recently produced a video highlighting the program’s accomplishments, which can be viewed here.