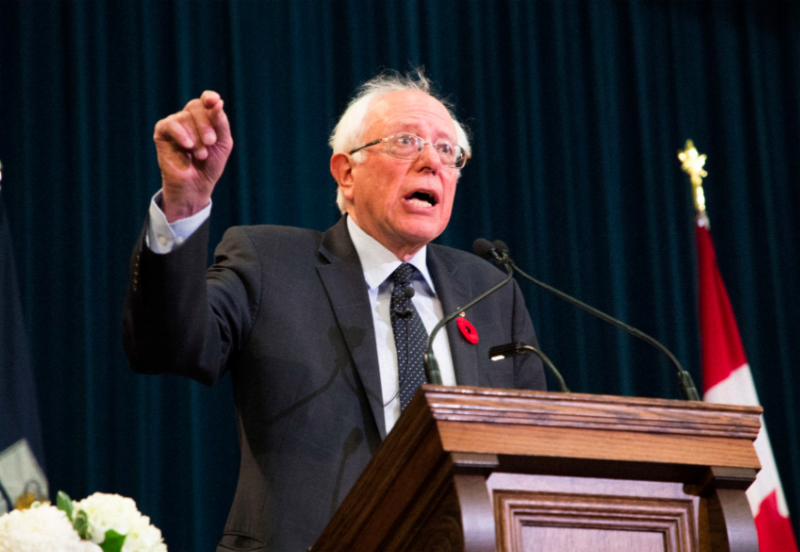 Amid a crowded field of Democratic candidates for the 2020 presidential nomination, Sen. Bernie Sanders (I-VT) has continued to embrace democratic socialism. During a speech on Wednesday, Sanders went into further detail about his proposed policy points as candidate and defended his support for Democratic socialism. “Let me be clear, I do understand that I and other progressives will face massive attacks from those who attempt to use the word ‘socialism’ as a slur,” he said, “but I should also tell you that I have faced and overcome these attacks for decades, and I am not the only one.” In a piece for The Atlantic prior to Sanders’ speech, Edward Isaac-Dovere examines how Sanders’ version of governing stands out from his campaign rivals, and the political advantages that could come with that embrace. He writes, “That Sanders would lean into democratic socialism—and that he’d do so now—is surprising only to people who don’t know him. He wants this fight. He believes that he’s more right than most insiders are ready to acknowledge, based on his own successes and based on how he’s defined so much of the larger Democratic agenda these past four years—not to mention all the polls that show support among young people for socialism.” In April, Sanders said democratic socialism means “a vibrant democracy and an economy that works for all, not just the people on top.” On Thursday, former Colorado Governor John Hickenlooper, one of Sanders’ 2020 rivals, denounced the senator’s vision.“Democrats must say loudly and clearly that we are not socialists. If we do not, we will end up helping to reelect the worst president in the country’s history,” he said. “Socialism is the most efficient attack line Republicans can use against Democrats as long as (President Donald) Trump is at the top of the ticket.” A 2018 PRRI survey found that many Americans were still split over how to define socialism. PRRI’s David Tigabu writes, “A majority (54%) of Americans identify socialism as a system of government that provides citizens with services like health insurance, retirement support, and access to free higher education, according to PRRI’s 2018 American Values Survey. Forty-three percent of Americans say socialism is a system where the government controls key parts of the economy, such as utilities, transportation, and communications industries.”

Report Looks at the U.S. Territories and LGBT Rights

A new report from Lambda Legal and the Movement Advancement Project (MAP) looks at LGBT rights in the five U.S. territories and how that compares to the fifty states. Same-sex marriage is legal in four of the five U.S. territories, however, it is still outlawed in American Samoa which does not fall under the federal court system. According to the report, American Samoans are considered “American nationals,” and thus would not be protected by U.S. Supreme Court decisions. In an interview about the project, MAP Policy Research Director Naomi Goldberg tells The Washington Blade, “There is progress happening in territories and there is fertile ground for more progress to happen. There is an investment that we need to be making to further that progress on the ground by helping folks on the ground.” The relationship between the U.S. government and U.S. territories has paved the way for some legal victories, and battles on LGBT rights. The report finds that Puerto Rico is most in line with existing laws concerning LGBT citizens in the United States. The report also finds that “much work [is] to be done in the areas of nondiscrimination, health and safety, youth policy, identity documents, and more. That said, advocates working on the ground in the territories have achieved real and meaningful legislative and legal changes.”